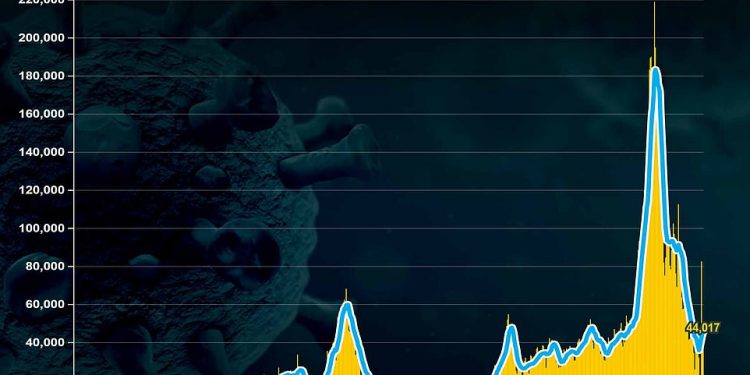 
Britain’s daily Covid cases rose for the first time in a month today in a sign the outbreak may be growing again, while hospitalisations also ticked upwards.

Government dashboard data shows another 44,017 infections were detected over the last 24 hours, up 11 per cent on the tally last Wednesday.

It brings an end to more than four weeks of tumbling daily cases, with about 33,700 cases now being recorded every day on average.

Latest hospital data shows 1,040 people were admitted to hospital with the virus on February 26, up seven per cent on the 970 from the previous week.

But the seven-day average number of daily admissions is still falling, meaning today’s rise could be a blip. Daily Covid deaths, however, have continued to fall, with the 74 victims announced today down 54 per cent in a week.

Experts warned it may cause some fluctuations in case rates, but called for calm saying there is no evidence that it is more severe than the original strain.

Plummeting testing numbers, which have dropped by a tenth in a week, also make it more difficult to track trends in infections.

It comes less than a week after Boris Johnson ditched all of England’s remaining restrictions, with requirements to wear face masks on public transport and isolate when infected coming to an end.

Mass testing is also set to be dumped from April 1, with the country instead set to rely on the Office for National Statistics’ Covid infection survey. But experts today warned this could take two weeks longer to pick up new potentially dangerous variants. 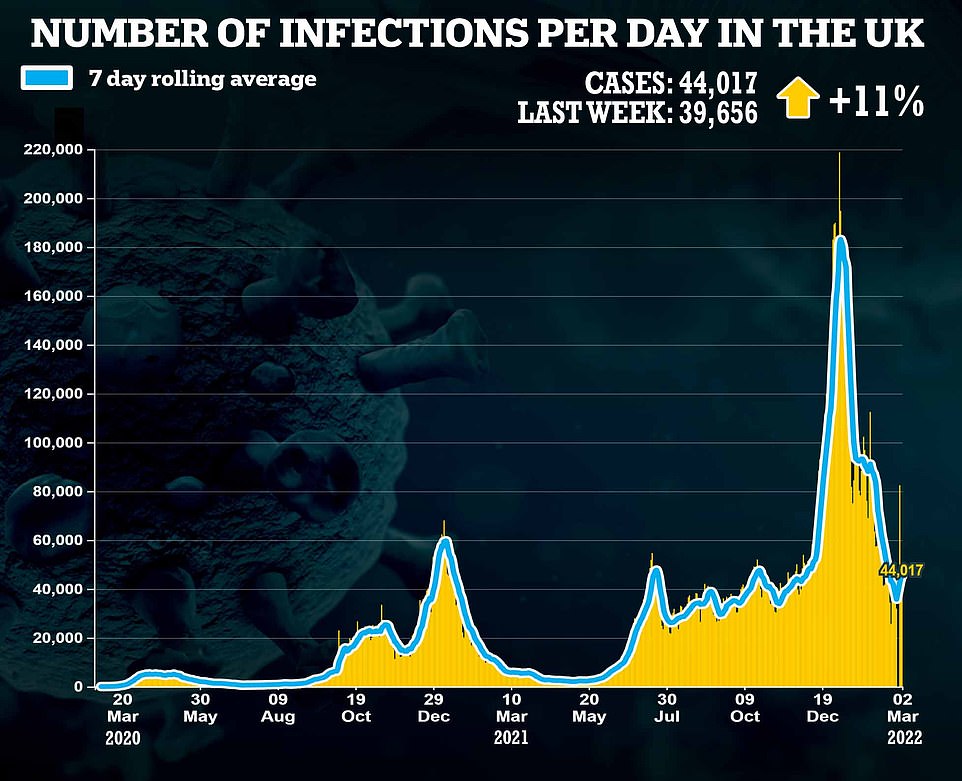 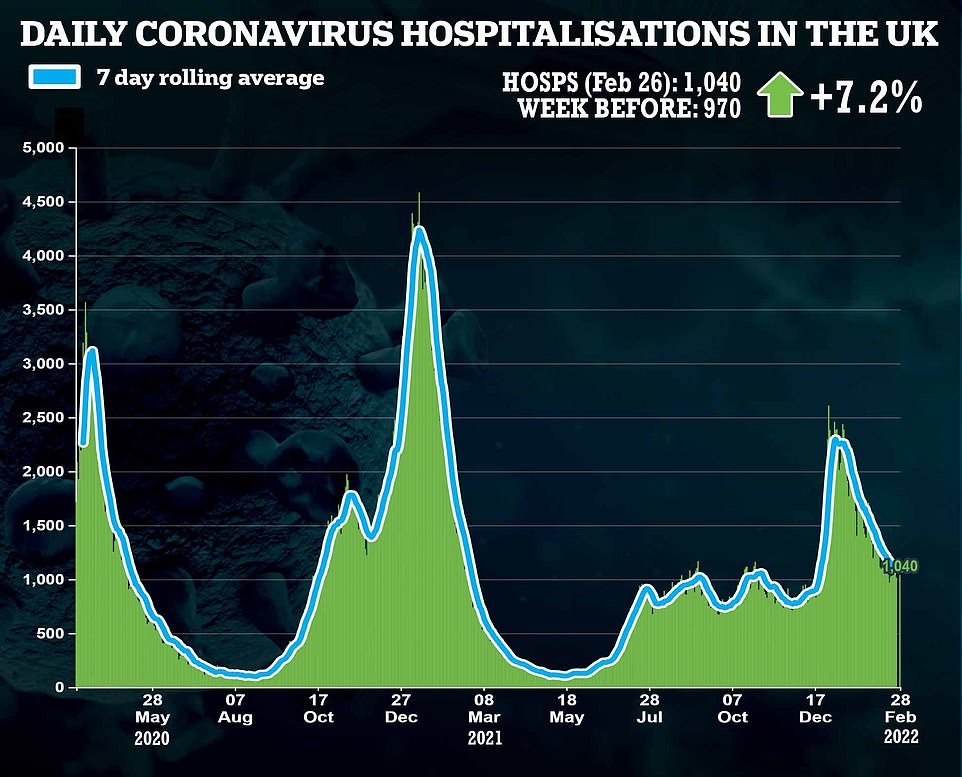 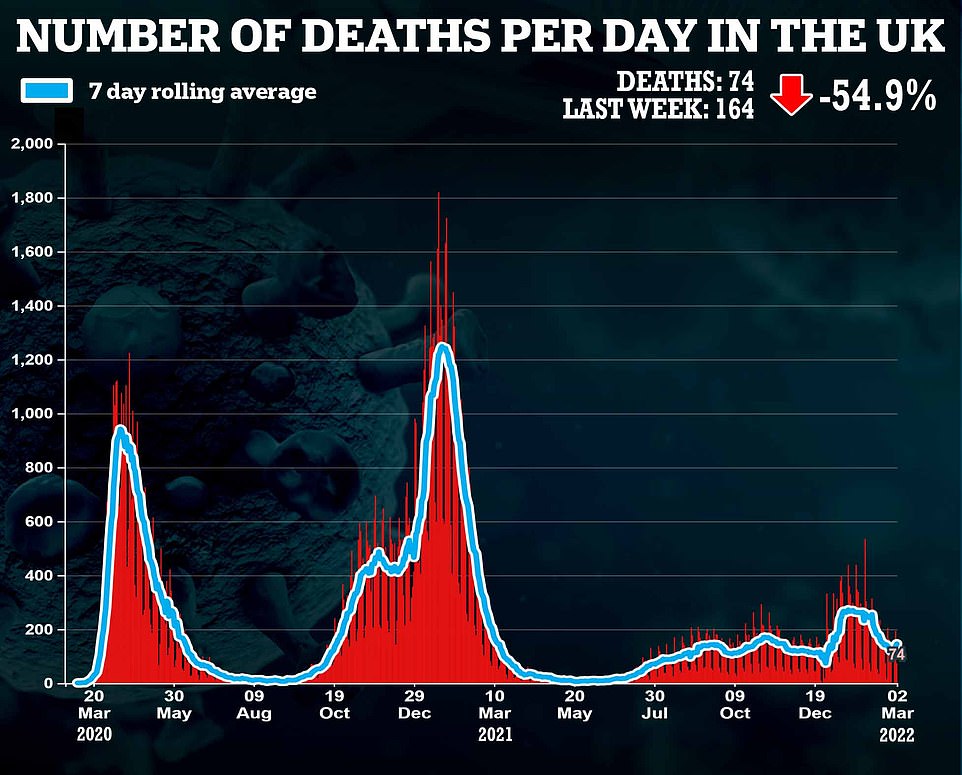 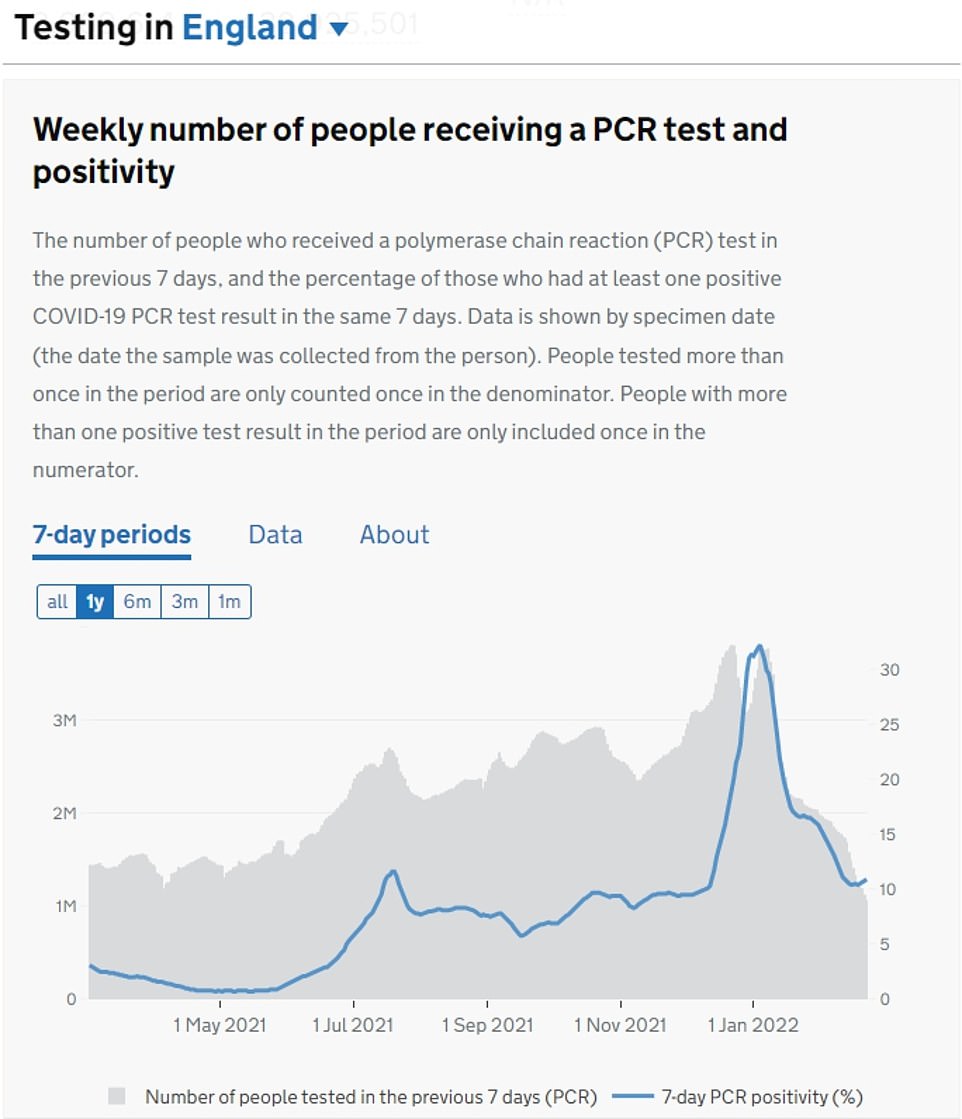 The above shows the proportion of PCR tests that are positive — pick up the virus — in England. It reveals the rate has started to tick back up, in a sign the outbreak is now growing in the country

UK Health Security Agency figures showed 649,000 swabs for the virus were carried out yesterday, compared to the 734,000 from a week ago.

The positivity rate for PCR tests — the proportion that pick up the virus — is also rising in England, in another sign cases are starting to tick back up.

GPs could resign over new NHS rules that require practices to stay open later and on weekends unless they are given more cash, it was claimed today.

The British Medical Association (BMA) said doctors were ‘bitterly disappointed’ at the changes to their NHS England contract imposed without their support.

Union bosses have tried to negotiate terms with the NHS over the past year, amid an ongoing row about access to face-to-face appointments – but talks hit a stalemate.

But the final contract, given to the BMA just hours before being made public, made no mention of the additional cash it had demanded.

The BMA says GPs were already working weekends and weeknights and that the deal basically amounted to ‘lesser funding for the same service’.

Without an ’emergency rescue package’, the BMA warned practices ‘will lose staff’. It has not disclosed how much cash it wants or who would receive it.

Commentators have warned the move could trigger a wave of retirements and force practices to ration regular weekday appointments to cover the overtime.

From October, each local hub of GP surgeries, known as Primary Care Networks, will have to offer appointments until 8pm Monday-Friday and between 9am-5pm on Saturdays.

Practices must offer a full service during the extended hours, with access to nurses, pharmacists and physiotherapists.

Overnight, The Times newspaper claimed PCNs could be stung by financial penalties if they failed to see patients on evenings and weekends.

Breaking cases down by UK nation, revealed they rose in Scotland (up 30 per cent in a week), England (up eight per cent) and Northern Ireland (up five per cent) compared to seven days ago.

Only Wales recorded a downturn in cases, falling 10 per cent compared to the same time the previous week.

UKHSA experts warned last week that BA.2 was now dominant in England, making up 52 per cent of all Covid cases in the week to February 20.

But scientists said there was no reason to panic.

They pointed to Denmark where the variant already makes up almost every case but is barely having an effect on hospitalisations or deaths.

The Government there deemed the strain such a non-threat that it has ended virtually all Covid restrictions — like England did last week.

Professor Paul Hunter, an infectious disease expert at the University of East Anglia (UEA), told MailOnline yesterday that BA.2 cases were still increasing at least a week ago even as infections with the older Omicron strain began to fall.

He warned cases could soon tick up because of the sub-variant, but that they would not ‘continue to increase for much longer’.

Professor Hunter added: ‘It is already increasing much more slowly than a few weeks ago.’

It comes after one of the Government’s chief pandemic advisers today warned that new Covid variants could take weeks longer to be detected when mass testing is scrapped.

Professor Graham Medley, chair of No10’s coronavirus modelling group, said he expects a ‘one to two week delay’ in picking up new mutants when the final part of England’s ‘living with Covid’ plan comes into force on April 1.

From that point the country will rely solely on the Office for National Statistics’ weekly Covid survey to monitor the spread of the virus, with only severely vulnerable people eligible for free tests.

Professor Medley said that while the UK was alerted to Omicron by South Africa, and Delta by India, it was Britain’s mass testing programme that first picked up the Alpha variant in South East England and warned the world.

And he pointed out the super-transmissible Omicron became dominant in just weeks, a crucial period which may have been missed if it were not for the scheme.

Professor Medley, an infectious disease modeller at the London School of Hygiene and Tropical Medicine, was speaking to MPs on the Commons Science and Technology Committee today.

They told MPs that no modelling had been done on the trajectory of the pandemic when all rules are lifted.

But axing mass testing has been welcomed by many scientists and Tory MPs, with the entire testing and tracing scheme thought to cost the taxpayer £2billion a month. 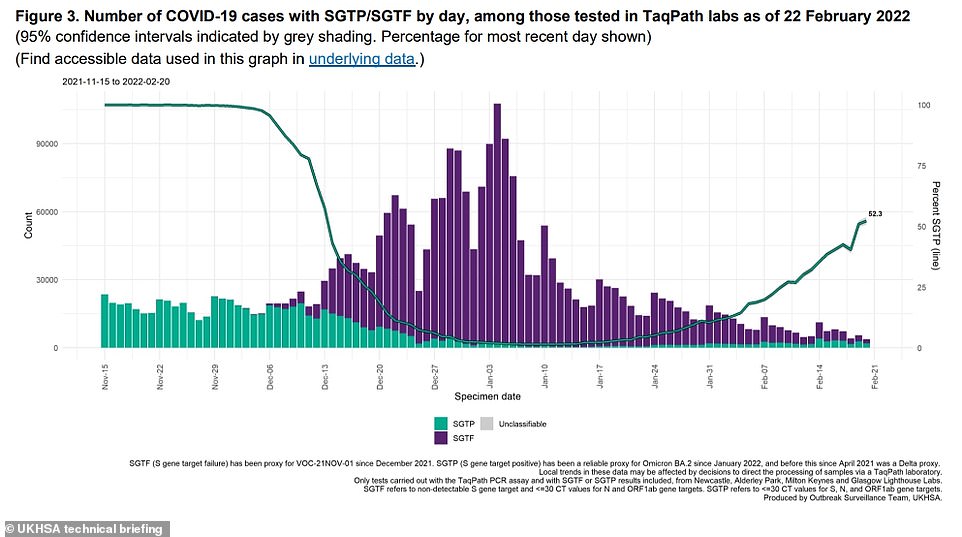 The above graph shows that BA.2 – a sub-variant of Omicron – is now behind 52.3 per cent of all Covid cases in England, the UK Health Security Agency said. The data is based on S-gene testing, and shows the new version is now more prevalent than old Omicron

The above graph from the Sanger Institute shows the proportion of cases down to different Covid variants. It reveals that a more infectious version of Omicron BA.2 (light blue) is now dominant over Omicron (yellow and pink). Other variants including Delta (light green), Alpha (purple) and the old virus (green and red) have now disappeared. The data is up to the week ending February 19 and based on surveillance of genomes

Lateral flows should be kept because most of testing regime cash was spent on PCRs, SAGE adviser says

No10’s scientific advisors have cast doubt over the wisdom of scrapping free Covid lateral flow tests, arguing they take up a tiny fraction of the heavily-publicised £2billion per month figure.

The comments, made to MPs in a meeting of the All-Party Parliamentary Group on Coronavirus yesterday, came as Labour accused Health Secretary Sajid Javid of ‘pulling a fast one’ on patients over Covid funding.

Free Covid testing is reportedly costing the country £2bn per month, and the price tag was cited by Boris Johnson as a factor in moving to people having to buy their own if they wanted them.

From April 1, most Brits will have to buy lateral flow tests from high street pharmacies for as much a £3 per test, three times what people in France will pay.

The tests, which can cost pennies to produce, were a crucial component of how the UK battled through the Omicron wave, with experts and minsters urging people to take them before going out to meet other people.

On Tuesday two SAGE scientists told MPs that the heavily quoted £2bn per month cost for test is actually driven by the more expensive PCR tests, which require lab analysis.

‘The Alpha wave we didn’t know was coming. That was first detected in Kent and that was seen because of changes in patterns in community testing.

‘There would have been a one or two week delay before (the ONS survey) picked up that variant.’

Free lateral flow and PCR tests will end across the UK from next month, which some medics warns risks outbreaks going undetected.

The ONS survey involves randomly swabbing 100,000 people a week to track the virus and is considered the gold-standard of Covid surveillance – but it is delayed.

Professor Medley told the committee the ONS survey was a ‘critical source’ of information, but that delays could lead to a variant being missed.

The chair of the Scientific Pandemic Influenza Group on Modelling (SPI-M), which feeds into SAGE, said: ‘We’ve seen with the Omicron wave that you measure the time period from beginning to end in days almost as it develops.  So it is unlikely I suspect that the ONS will give us the same level of awareness both in terms of this variant but also we have to worry about future pandemics.

A more infectious version of Omicron, named BA.2, is currently behind the majority of cases in Britain. It is not more deadly than its predecessor.

But SAGE says there is no guarantee the next variant will be less severe, highlighting the importance of staying vigilant of new mutants.

Professor Medley was also asked in the committee about Covid modelling produced to help advise policymakers. His team’s modelling has been subject to criticism, with scientists accused of overegging numerous waves of the pandemic.

Most recently it warned there could be 10,000 hospitalisations and 6,000 deaths every 24 hours from Omicron. In reality, there were never more than 2,000 admissions and 300 fatalities linked to the virus a day.

Professor Medley insisted that while the group produced several different scenarios, the committee never told ministers which one they thought was most likely.

‘We have in the past being asked by the Cabinet Office to say which is going to happen and our immediate response has been we don’t know, and we can’t say. I think that is the right response that we have.’

He said that on one occasion they had suggested which scenario would happen — in September 2020 — they had been incorrect.

Boris Johnson was given the confidence to abandon mass testing amid weeks of falling cases, hospitalisations and deaths.

He has said the ONS survey — considered as world-leading — will also be reduced when its funding is renewed in April, although is yet to give details.

Medical unions railed against the ‘living with Covid’ plan, warning ministers that ‘now is not the time to take risks’ and saying restrictions should be gradually eased on the basis of evidence.

But the Government pushed ahead amid a cost cutting spree from the Treasury aiming to shave more than £2billion off the budgets.