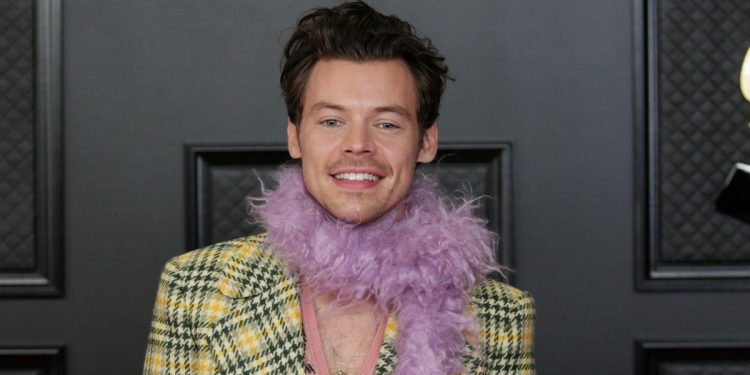 
Ulrika Jonsson has revealed that she would never date Harry Styles because of his eccentric dress sense.

The former Celebrity SAS Who Dares Win contestant, 54, has hit out at the former One Direction singer’s newfound fashion sense as she complained that there are no ‘real men’ left in showbiz.

The TV star moaned that when he was back in One Direction Harry, 27, adapted the ‘bad boy’ persona as he was draped in dozens of tattoos and rocked a more indie look.

But as time goes on, and as gender neutral fashion is becoming the norm, Ulrika has made it clear that she simply cannot get on board with the record-breaking musician’s style evolution.

“He’s got it all. Looks, voice, rhythm (an older girlfriend) and a somewhat flexible fashion sense,” Ulrika wrote in her latest column with The Sun.

“This is one young man who is more than a little comfortable turning up on the red carpet in dresses, cardigans, sequins and pearls. He has a penchant for scarves. And when he first appeared publicly like this, it felt utterly unexpected.

“But I initially thought: “Good on you, boy.”

“He had always been such a macho, naughty boy, draped in tattoos, and suddenly he is turning up in heels. I don’t quite understand the point.”

Ulrika went on: “My question now is: Where have all the men gone? Sure, fashion is just an extension of our personalities. It’s an expression of ourselves. Which, granted, could pertain to an element of: “Look at me, everybody.

“Let’s be clear. It doesn’t repulse me in any way. It just gives out a strong message of ambiguity towards their sexual identity, suggests they are not strictly either female or masculine.”

Clearly not convinced by the latest trends in mens fashion, Ulrika insisted that she feels as though Harry’s style evolution is ‘like a watered-down version of drag’.

The TV star went on to insist that the mens feminine fashion has ‘almost become a one-upmanship of who can outdo the next guy in the best blouse’.

Despite Ulrika’s opinion on Harry’s style evolution, the former One Direction star has inspired millions of fans across the globe in recent years as he continues to dispel gender stereotypes and fashion boundaries.