UN has not adopted Korean as official language 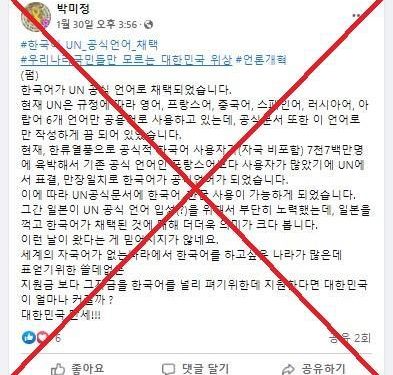 “Korean has been adopted as a UN official language. Currently, according to UN regulations, English, French, Chinese, Spanish, Russian and Arabic are the only official languages used, and official documents are only written in these languages,” the Korean-language post reads.

“As the Korean craze caused the official number of Korean speakers (not including those in their own country) to reach 77 million, more than those who use French, an original official language, the UN voted unanimously to make Korean an official language.”

Screenshot of the misleading claim shared on Facebook, captured on February 4, 2022.

The posts circulated after South Korean advocacy group Voluntary Agency Network of Korea (VANK) pressed the government to formalise an official campaign to adopt Korean as an official language at the UN and other international organisations.

The UN has six official languages — English, French, Russian, Chinese, Spanish and Arabic — which are used in UN meetings and official written documents.

The Korean language is spoken by more than 75 million people, including 72 million living in the Korean peninsula.

Some social media users appeared to be misled by the posts.

One comment reads: “It goes without saying, but my heart is filled with pride.”

Another reads: “Wow amazing!! Korea is the best as always.”

However, the claim is false.

A spokesperson for the UN Subregional Office for East and North-East Asia (UNESCAP) said: “The UN’s official languages are English, French, Russian, Chinese, Spanish and Arabic — Korean has not yet been adopted as an official language.”

The spokesperson told AFP on February 4 that the UN had raised “no resolution” proposing Korean as an official language.

“The Korean language is sometimes used at UN meetings where multiple Korean-language speakers are in attendance, but Korean is neither spoken as an official language nor used to write documents in an official capacity at the UN.”

The UN’s website documents the process by which each of its six official languages were adopted.

Neither the UN Security Council nor the General Assembly lists any resolution proposing the adoption of Korean as a UN official language.

What’s Next For The Ranch?