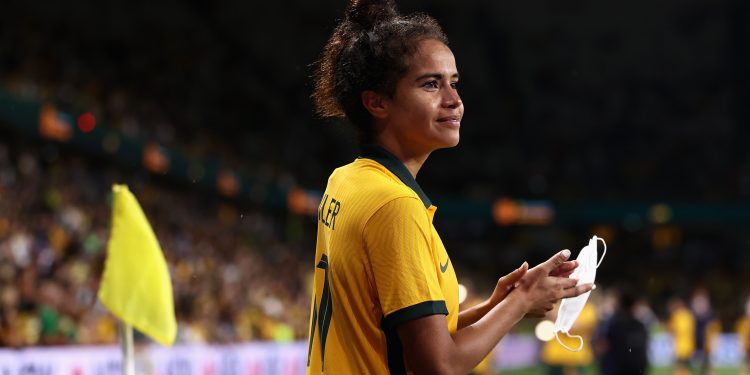 
Mary Fowler is on the verge of international superstardom, and Sam Kerr could be a key beneficiary.  At 19, the Matildas starlet seemingly has the world at her feet.

A year out from a Women’s World Cup on home soil, the biggest move of Fowler’s career arguably couldn’t come at a better time for either the teenager or the Matildas.

“In the back of my mind I knew the World Cup was next year and so being at a top club was definitely my priority,” Fowler told Australian Associated Press.

“Being at a club like Man City I’m going to be playing top-level football throughout the whole year going from club level to national team level.

“It’s just going to be the best football environment you can be in throughout the whole year.

“It’s definitely an amazing opportunity from that sense and it really helps me to grow as a player and then that will inevitably help the national team because I’ll go in as a better player too.”

In November, Kerr told the Australian Associated Press the “unbelievable” Fowler was the Matildas’ best finisher on both feet, a “top professional” and flagged she would become a “world-class player”.

While Fowler and Chelsea star Kerr will now clash at club level, the 19-year-old is well aware her own improvement could help take the heat and pressure off her national team captain.

“Sam does an amazing job and she does have an extreme amount of pressure because she’s so good at what she does,” Fowler said.

“But I’m very much focused on trying to improve myself as a player.

“If that ends up meaning that I take pressure off her, then great, but I’m very much trying to improve myself as an individual and that will, in turn, help national level and club level team.”

Breaking onto the scene as a 15-year-old striker in 2018, Fowler now prefers playing as a creative attacking midfielder, but is happy to play anywhere in attack.

🗣 “When you watch City play, you see football. You see how beautiful it is and you can really fall in love with the game just by watching City play.”

And much like Kerr, City teammates Hayley Raso and Alanna Kennedy and Lyon’s Ellie Carpenter, the former Montpellier gun has got trophies in her sights.

“I think it’s something that I’ve missed in the places (clubs) that I’ve been, that the winning mentality wasn’t so strong,” Fowler said.

“So to go to a club where winning is very much at the front of their minds, it’s very important for me and I’m excited to be in such a top-level environment.”

Matildas prodigy Mary Fowler is eyeing trophies and developing into a top player at Manchester City and Australia is poised to reap the rewards of her big move.

More news can be found here.

I'm a recent widow. I'm building a house on my son's and daughter-in-law's land. Do I have legal ownership? What if they decide to sell, divorce, or die before me?