Under-30s will be offered alternative Covid vaccines due to concerns over rare blood clots, the government’s leading scientific advisers have confirmed.

The Joint Committee on Vaccination and Immunisation (JCVI) said the decision had been made following an investigation which found that 79 people in the UK had suffered rare blood clots – with 19 deaths, including 3 aged under 30 – after receiving the Oxford/AstraZeneca jab.

Dr June Raine, head of Medicines and Healthcare products Regulatory Agency (MHRA), insisted while the evidence was “firming up” a link to the condition that further investigation would be done to conclude “beyond all doubt” that the vaccine had caused the clots.

The decision will mean that those aged 18-29 will be offered alternative vaccines, including the Pfizer and Moderna jab, when they are offered appointments in the coming months.

But the group said the Oxford jab would continue to be used for those aged 30 and older because the benefits of receiving the vaccine were still “very favourable” for the vast majority of people.

Those under the age of 30 who have already received a dose of the Oxford/AstraZeneca jab will be encouraged to receive their second dose when invited.

Describing the decision as a “course correction”, Van Tam, said: “If you had said to me by March 2021 that we would not have needed a course correction, then that would have amazed me.”

He confirmed the impact on the government’s plans to offer a first dose of a Covid vaccine to all adults in the UK by the end of July would be “zero” or “negligible” due to the roll out of new vaccines from other suppliers.

Dr Raine said the figures suggested that 4 people in a million would be affected by clots. “The balance of benefits and risks is very favourable for older people but it is more finely balanced for younger people,” she added.

The UK’s medical regulators have gone further than the European Medicines Agency (EMA) who this afternoon said “unusual blood clots with low blood platelets” should now be listed as a “very rare side effect” of the AstraZeneca Covid-19 vaccine.

But it has not suggested there should be any pause in its use for any groups, and it added that “the overall benefits of the vaccine in preventing COVID-19 outweigh the risks of side effects”.

It follows an investigation by PRAC, the EMA’s safety committee into 86 cases of two different kinds of thrombosis, 18 of which were fatal.

In a statement it said: “One plausible explanation for the combination of blood clots and low blood platelets is an immune response, leading to a condition similar to one seen sometimes in patients treated with heparin (heparin induced thrombocytopenia, HIT).

“The PRAC has requested new studies and amendments to ongoing ones to provide more information and will take any further actions necessary.

“The PRAC stresses the importance of prompt specialist medical treatment.

“By recognising the signs of blood clots and low blood platelets and treating them early, healthcare professionals can help those affected in their recovery and avoid complications.” 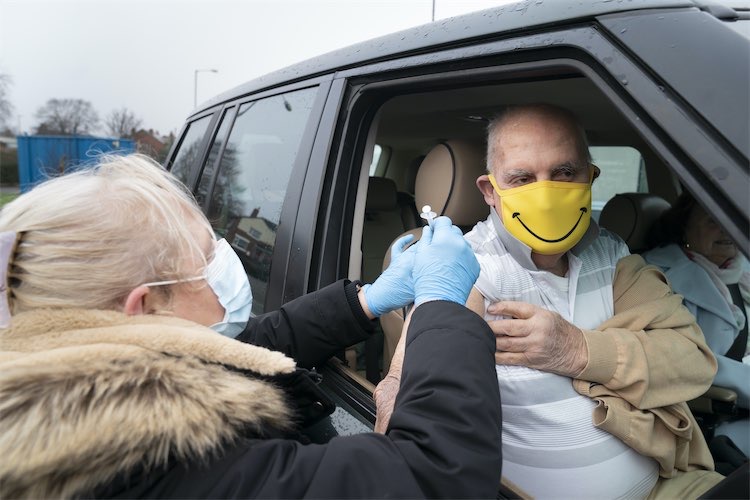 It comes after a trial of the Oxford/AstraZeneca jab in British children was paused on Tuesday due to the ongoing investigations.

Around 300 volunteers had signed up for the study which was investigating whether the vaccine produced a strong immune response to the virus in those aged between six and 17.

Professor Andrew Pollard from the University of Oxford said there were no safety concerns with the trial, but they had chosen to pause the study until the MHRA and EMA had provided further information on the blood clot cases.

He said: “While there are no safety concerns in the paediatric clinical trial, we await additional information from the MHRA on its review of rare cases of thrombosis/thrombocytopenia that have been reported in adults, before giving any further vaccinations in the trial.”

Speaking on Wednesday, Prime Minister Boris Johnson had insisted the AstraZeneca jab was “safe”, but added “the crucial thing for everybody is to listen to what the scientists, the medical experts have to say later on today.”

Praising the vaccination programme, he added: “You can really start to see some of the benefits of that – it’s pretty clear that the decline in the number of deaths, the decline in the number of hospitalisations is being fuelled, is being assisted, the steepness of that decline is being helped by the roll-out of the vaccines so it’s very important for everybody to continue to get your second jab when you’re asked to come forward for your turn.”

Cognitive Behavioral Therapy May Help With Your Insomnia

When the Taliban returned to...

Why We Must Act Now to Protect Them — Global Issues

The rapid decline of insects...

Bitcoin has shot up 50% since the new year, but here’s why new lows are probably still ahead

To the delight of investors...

Another Life: Deer out, beavers in

The Phoenix Park, says its...