Unlikely suffragette Miriam Leslie helped get the vote for women 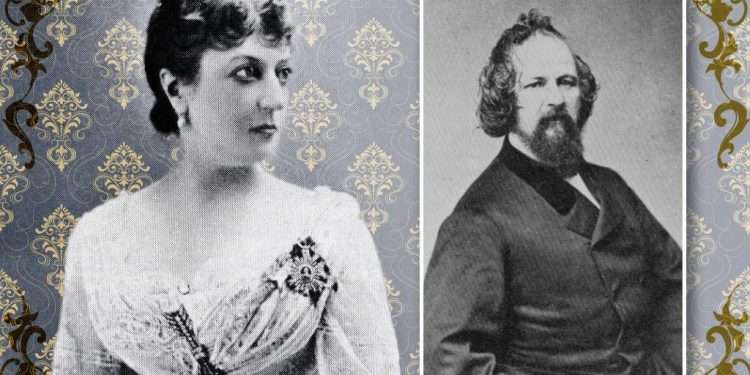 
In 1917, the fight for women’s suffrage had stalled. Warring factions had splintered and weakened the movement, and New York State rejected women’s right to vote in 1915.

But then the National Woman Suffrage Association received a windfall. A woman named Mrs. Frank Leslie had left nearly all of her $2 million estate to the organization: an enormous sum that basically supercharged the passage of the Nineteenth Amendment in 1919.

This so-called “empress of journalism” preferred corseted gowns to bloomers, diamonds and pearls to “Votes for Women” sashes, and Gilded Age galas to marches. She spent her 40-plus years as an editor and columnist at various popular magazines instructing women how to apply makeup, keep house, secure a husband and act like a proper lady. (Even at work she wore a ruffled organdy apron over her wasp-waisted dresses.)

Yet Leslie was hardly the complacent, doting housewife.

An enterprising businesswoman, she fought — her detractors might have said “slept” — her way to the top with ruthless determination. She helmed the country’s biggest publishing company, Frank Leslie Publishing House, for 20 years after she inherited it from her third husband, bringing it back from the brink of bankruptcy and managing some 400 male employees with an iron hand.

Plus, she openly flouted convention, taking lovers, divorcing three of her four husbands and shamelessly courting publicity through her gaudy jewels, conspicuous consumption and torrid affairs. Her friends included the flamboyant writer Oscar Wilde and the showman P.T. Barnum.

Mrs. Leslie, however, rarely gets mentioned among those other Gilded media titans Pulitzer and Hearst. A new biography, “Diamonds and Deadlines: A Tale of Greed, Deceit and a Female Tycoon in the Gilded Age” by Betsy Prioleau (Abrams Press), tells her spectacular story, from debased childhood to vaunted opulence. More than a Gilded Age girlboss, Mrs. Frank Leslie — Prioleau argues — was a titan, and an unsung, if complicated, feminist heroine who “deserves to be back in the public eye.”

Miriam Florence Follin was born in 1836, in New Orleans. Her father, Charles, an erstwhile cotton trader, was, according to one acquaintance, a “sort of adventurer” who had “no business [except] living with other women.” Her mother — well, no one knew for sure.

Prioleau makes the case that she was probably an enslaved woman. Charles’ previous wife died in 1833, and the woman Miriam would eventually call her mom, her father’s common-law wife Susan Danforth, didn’t enter the picture till Miriam was 6. (Miriam’s race was the subject of much speculation among journalists, who pointed out her “Creole” features, despite her assiduous use of skin-lightening pearl powder.)

Miriam bounced between New Orleans, Cincinnati and New York throughout her childhood. Charles would disappear for long stretches at a time, allegedly to seek his fortune. But he did encourage his daughter’s studies, and she excelled in school, particularly languages.

Still, a girl in mid-1800s America couldn’t get by on brains alone. So teenage Miriam, now living in a dirty Manhattan boarding house with Danforth and a host of unsavory characters by the Bowery, changed her name to Minnie and, by all accounts, dabbled in sex work.

By the time she was 20, Miriam had weathered a shotgun marriage to a jeweler who used to pay for sex in diamonds, a divorce, an unlikely stage career as the protege of the famed courtesan Lola Montez, and an affair with a Tennessee congressman, William Churchwell, who bought her a Seventh Avenue townhouse.

In 1857, she married another one of her paramours, E.G. Squier, a dubious archeologist, lecturer and journalist with a predilection for “houses of convenience,” “maidens with a hint of color” and “indigenous boys,” who like Miriam’s father always seemed to be in debt. The unhappy bride spent their rocky honeymoon period learning German, “brushing up” on her algebra and translating Alexander Dumas from French to English.

Still, E.G.’s status got her invited to Abraham Lincoln’s inaugural ball in 1861. There, the 25-year-old Miriam — dressed in a “décolleté white illusion dress” with “puffed sleeves, a satin-quilled bodice, and cherry overskirt looped up with white roses” and flirting with all the foreign diplomats in a variety of languages — met Frank Leslie.

Miriam and her new, powerful paramour treated the syphilis-stricken E.G. with disdain: Leslie would escort Miriam to work by carriage, while E.G., also on Leslie’s payroll, walked. Another time, during a sojourn to Europe, Leslie arranged for E.G. to be arrested and sent to debtor’s prison in England for two weeks — so he and Miriam could gallivant through Paris buying jewels and attending parties without him.

Eventually, the pair contrived E.G. to be caught with a pair of prostitutes —  essentially, having two of Leslie’s illustrators invite him to dinner at a brothel and getting him drunk — securing Miriam’s annulment. They married in 1874. By the time he died of throat cancer in 1880, at the age of 59, he had disinherited his sons, leaving everything — including his media empire — to her.

Yet, Miriam seemed to have a knack for landing incompetent men. She “inherited an estate in colossal disarray,” writes Prioleau. “The publishing house was on its beam ends — crippled by unprofitable publications and poor guidance and saddled with unpaid loans.” Then, she had to fight a lawsuit brought by Leslie’s sons, who contested the will and accused Miriam of witchcraft. She found herself kicked out of their Fifth Avenue apartment, installed into a one-bedroom garret without windows or heat, and saddled with $98,000 of her deceased husband’s debt.

Miriam changed her name legally to “Frank Leslie,” partly to help smooth her entree into a man’s world, partly to further meld her identity with her publications. She then scrapped her husband’s business plan, and cut the amount of periodicals from 12 to seven. She “monitored every facet of the company, from balance sheets to make-up and distribution, and logged twelve-hour days from 8:00 a.m. to 8:00 p.m.,” fueled by sandwiches and champagne. And she displayed her keen journalism sense, sending reporters and illustrators to Washington after James A. Garfield was shot — landing an exclusive inside the ailing president’s sickroom. Within a year, the company posted a profit.

She never formally joined the suffrage movement, and despite her career, clung to her notions of femininity, espousing her retrograde beliefs in her columns. She always looked for romance, conducting affairs with the ersatz “cowboy poet” Joaquin Miller and various faux marquis and Russian princes. (Her fourth marriage, to pal Oscar Wilde’s brother, ended quickly in divorce.)

She obsessed over her status, and spent her life trying to get into Mrs. Astor’s ballroom, although “the 400” — the elite group who ruled New York’s upper society — never would accept the likes of her. She displayed a shocking lack of empathy for the poor, and her publications’ avoidance of labor issues and championing of the rich ended up losing her readers in the end.

Mrs. Frank Leslie died on Sept. 18, 1914, after suffering a series of strokes. She was 78 years old. Everyone had an eye on a piece of her inheritance. But they were in for a big surprise. Apart from $130,000 divided among a few friends and family members, she left the rest of her $2 million to the National Woman Suffrage Association. Prioleau writes, “Mrs. Leslie, one of the least visible suffragists, donated the largest sum ever given to the vote for women — a gift never exceeded.” The association’s president “didn’t sleep the night she heard the news.” That money “could revolutionize the movement.” It was an “awful responsibility.”

Lots of people tried to contest the will, including Frank Leslie’s grandsons, who dredged up Miriam’s sordid past — including her illegitimate birth, possible mixed race and first shotgun marriage — and launched a smear campaign. The battles waged on for years, but the suffragists finally got their money, albeit reduced to a little under $1 million, in 1917. They used the funds to beef up their campaigning and build a massive publicity machine. Votes for Women passed in New York that year, with the US establishing the 19th Amendment two years later.

Despite her accomplishments and her contribution to women’s suffrage, however, Mrs. Frank Leslie has “vanished from memory,” perhaps because she does not fit neatly in the pantheon of feminist icons of her time, from Susan B. Anthony to Ida B. Wells to Harriet Tubman. As Prioleau puts it, she was an “unabashed egoist, indifferent to self-sacrificial deeds, and devil-driven for fame, rank, and power. … She was vain, bigoted, imperious and hard-boiled.” And she “embodied some of the worst aspects of the Gilded Age,” being racist, classist and vehemently anti-immigrant.

Yet, she was ahead of her time: a publishing titan, a woman who got ahead not because of men but in spite of them and a first-rate self-promoter and myth-maker. A “doyenne of theater and show, she would hate to be forgotten,” writes Prioleau. She would be relieved to know that she no longer is.