Once the mainstay of many a portfolio, UK equity income funds are now often seen as deeply unfashionable, in a world still in thrall to the glamour of US tech stocks.

But there are reasons to take a fresh look at these funds and trusts, which may have some international holdings, but focus on these shores.

Shares in British companies are regarded by many as undervalued, or even as bargain buys. That is certainly the view of private equity predators.

This represents an attractive opportunity, so long as you are ready for the shocks that inflation and a slowdown in an economic recovery could produce. 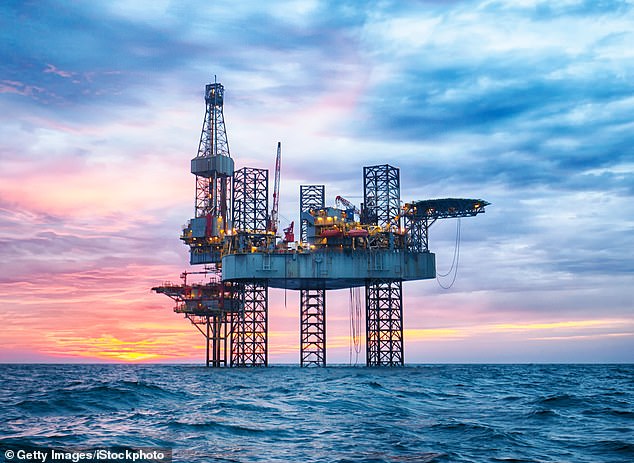 Big Oil: BP and Shell cut their divis last year but are paying out again

In the meantime, there is the prospect of a 3 per cent-plus income from dividends. That is alluring when deposit accounts are paying as little as 0.01 per cent, and the purchasing power of cash is being eroded by inflation.

UK dividend payouts may still be below their pre-pandemic level, but they rose by as much as 61 per cent in the first half of the year, according to investment managers Janus Henderson.

If this still sounds dull (I like dull, but I know it’s not to everyone’s taste) you may be more interested to learn that the prices of many of the 22 UK equity income investment trusts are at a discount to the value of their net assets. This means you are in effect buying underlying assets cheaply.

And they served their savers well when dividends were cancelled, or cut in 2020.

James Carthew of research firm Quoted Data explains that trusts – some of which have paid dividends every year for the past half-century – used their revenue reserves to maintain, or even slightly increase their payouts.

Law Debenture, which has a 3.74 per cent dividend yield, and Murray Income, with a yield is 3.9 per cent, lead the field in Carthew’s ranking of these trusts. His league tables are based on capital and income growth and the consistency of dividend payouts. Yet they are still at discounts of 2.66 per cent and 6.67 per cent, respectively.

Law Debenture has a professional services arm. This produces an income which ought to ensure that the trust’s managers James Henderson and Laura Foll are not obliged to venture into shares that are risky or have little growth potential. Henderson and Foll look for ‘high quality companies with strong competitive advantages at attractive valuations’.

Although Law Debenture owns oil giants BP and Shell, it also has a stake in Ceres Power, which is exploiting the switch from hydrocarbons to hydrogen.

Murray Income, which has increased dividends for the past 48 years, has holdings in Astrazeneca, Close Brothers and Diageo. Charles Luke, the manager, points out that shares which match the trust’s stock-selection criteria dovetail with the qualities that make an ideal private equity acquisition. But although this prospect of lucrative takeover offers may set pulses racing, thrill-seeking is generally not the UK equity income sector’s thing.

The vibe is more about reassurance and solidity. For example, Carl Stick, manager of the Rathbone Income fund, says he favours companies ‘that are paying down debts, reinvesting for the future and offer a sustainable income stream’.

He continues: ‘The UK is cheap versus other markets.

‘We are investing in sectors like financials. We are also in Big Oil – BP and Shell slashed their dividends last year, but they are paying out again. 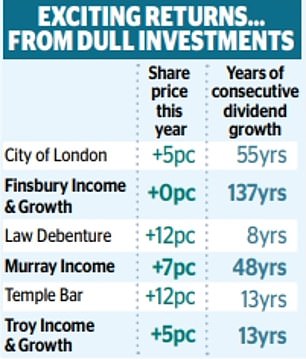 ‘Of course, I’m biased because I run an equity income fund, but we offer a yield of 3.7 per cent, when the best rate you can earn from a fixed rate bond is 0.7 per cent.’

Stick says that ESG (environment, social and governance) considerations will, more and more, determine UK equity income holdings. For the moment, some investors may baulk at the inclusion of British American Tobacco and Imperial Brands in funds such as City of London (whose yield is 5.2 per cent), Man GLG Income (4.64 per cent) and Royal London UK Equity Income (2.97 per cent) which are Interactive Investor’s three picks.

Imperial Brands also appears in the portfolio of Threadneedle UK Equity Income (2.83 per cent) which is one of AJ Bell’s top-rated funds. Another constituent is Morrisons, the supermarket which is the subject of offers from two private equity players. Morrisons’ fate will be decided at an auction today.

Artemis UK Income (3.47 per cent), a Hargreaves Lansdown favourite, provides exposure to Tesco which may be in the sights of other private equity bidders, but also BP, Barclays and Smiths Group whose technologies ‘enable modern life’.

One feature of life ahead seems set to be inflation, either transitory or longer-lasting.

A UK equity income fund or trust can be part of this buffer.

Boring, maybe. But is that such a bad thing?