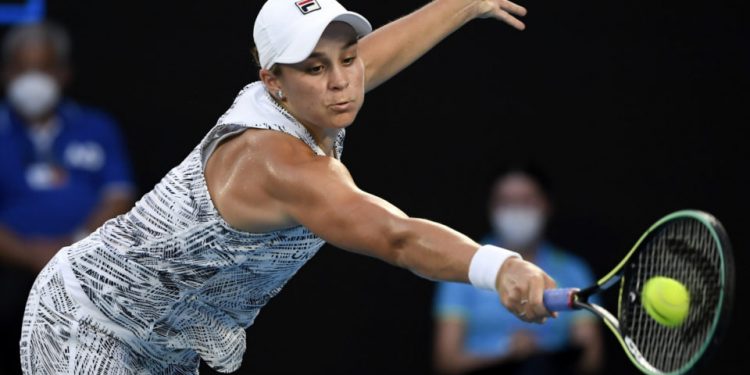 
Ash Barty is just one match away from becoming Australia’s first ever female singles finalist for 42 years after a 63-minute demolition job against Jessica Pegula last night.

The final score read 6-2 6-0 but really the match was done and dusted within the very first game. On serve, Pegula had three game points at 40-0 but lacked the conviction to force her way onto the scoreboard or into the contest. It didn’t get any better.

Barty by contrast, did little other than test her opponent with continued use of the single sliced backhand in the opening minutes, a wonderful weapon that gives her the requisite intelligence about her opponent’s game before she forces an error or strikes.

Barty was charitable in victory.

“She made me play my best tennis of the week,” she said of the American before praising the Victorian climate.

‘This is Brisbane weather, not Melbourne’

“This is Brisbane weather, not Melbourne” she said of another steaming hot day.

Regardless, Pegula, ranked 21, was never at the races and there was almost more action a few hours before on court 10 when Barty was hitting practice balls with two male partners in what looked a seamless session.

It was perhaps a better guide to her state  of mind, Ash casual in purple t-shirt and shorts with all seats court-side taken up by fans.

This was not the four or fire rows deep that Serena Williams was drawing to practice this time last year but it was very assured, calm and regal even. Exiting the court with two security guards, Ash looked down and headed to the players safe zone just 30 metres away. No-one ran after her for a selfie. She is on a mission this year and everyone knows it.

PR and smiles can wait

PR and smiles can wait another few days. It is a solid strategy.

Do not be misled by Keys’ ranking of 51. She is a tournament winner in Australia already this year, in Adelaide, as is Barty, and has a momentum to accompany her power play.

Derailed by injury and illness last year, she is a former US Open singles finalist and trains in Orlando, Florida, “the hottest place in the world in summer” she says.

Ninety minutes before Ash arrived on Rod Laver Arena, there was a wholly different Aussie atmosphere out on the new installed sunken amphitheatre, Kia Arena.

The men’s doubles quarter-finals was, truthfully, like no other match this fortnight. Kyrgios and Kokkinakis, Nick and Thanasi, against the unfortunate Tim Puetz and Michael Venus. The non-Aussies, a good pair, never stood a chance.

With not a seat empty, Kyrgios and Kokkinakis ramped up the antics and ramped up the crowd. It was a young, and not a traditionally tennis crowd, there to see their men win, more siu than boo.

Loud and raucous the Aussies and the fans pumped themselves up in tandem. Think the AFL grand final, a world heavyweight championship bout with Muhammad Ali and Joe Frazier, the footballer Diego Maradona at his most imperious and taunting, and this was the thumping, circus-like bedlam of the Melbourne Park arena.

“When we walk though that tunnel there is no feeling like it,” said Kokkinakis. “Everyone is going bunta. I have not played anywhere with an atmosphere like this. The rowdier the better.”

“I want to put on a show and grow the sport,” said Kyrgios. “We grew up together at Melbourne Park. I am not finished, I want to win the f…… thing.”

Kyrgios and Kokkinakis are new to doubles, they just go out and play they said. We’ll think about the match afterwards, said Kokkinakis. Even the hand signals – fundamental to all successful doubles pairings – are new. We’re still learning them said Kyrgios post-match, holding up his hands to illustrate – “cross, stay, fake” he said. Not much but it is, it seems, all they need.

On Rod Laver Arena at the same time, the Rafael Nadal and Denis Shapovalov match that delayed the start of the Ash Barty show was a minor classic. Rafa two sets up, appeared done in, with the physio called in the fourth set for a stomach upset but the Spaniard pulled himself together to prevail 6-3 in the fifth set. There were even allegations of corruption by the Canadian around the (excessive he felt) time taken on the Spanish serve. A mistake, he’s young, said Rafa, move on.

Ridiculously, a 21st major title for Nadal has not yet been dwelt on this AO. But in the semi-finals now, only two opponents remain. It will be anything but easy but do not bet against the man from Majorca.