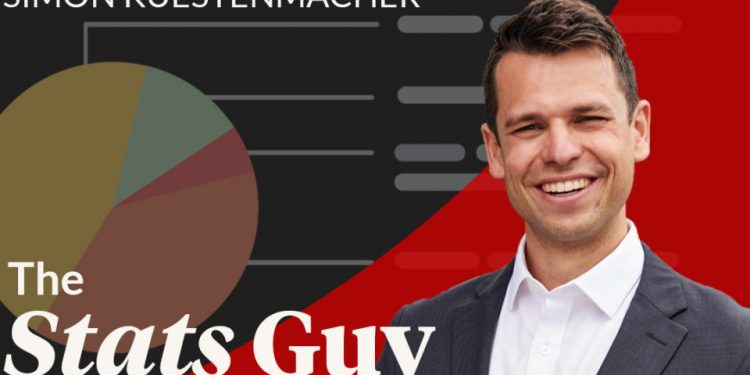 We are returning to my favourite dataset today. Skill levels are a simple way of categorising the workforce into five groups, based on the minimum formal education that is required to perform that job.

In Australia education pays off. On average higher educated workers earn much more than the less educated. Skill level 4 jobs are often referred to as low skilled and skill level 5 jobs as unskilled. These nomenclatures are not a judgement of people or of their work but simply reflect the training linked to each job.

As this chart shows (and as I wrote about previously) it is hard for people on skill level 4 and 5 incomes to raise a family (let alone become homeowners) in our capital cities.

Over the last decade Australia continued its transition into a highly skilled knowledge economy and added lots of skill level 1 jobs (37 per cent increase) in the process. All the while, skill level 5 jobs only grew by 5 per cent and skill level 4 jobs by 12 per cent.

Which basic policy settings might help workers in low and unskilled jobs to earn more money while allowing the economy to have enough such workers available?

Skill level 4 jobs require a certain level of formal training (commonly Cert II). It’s on policymakers to ensure that wages for these jobs are at a level allowing for a decent quality of life. During the pandemic low-income workers received public recognition and were deemed to be essential.

While acknowledging the hard and essential work done by truckies, delivery drivers and personal care assistants is a wonderful gesture, a pay rise would be much more welcome. To make skill level 4 jobs more attractive, directly increasing pay or granting tax concessions are the most efficient levers.

Skill level 5 jobs are so called unskilled jobs, meaning no formal training is required to perform the job. Your first job probably was skill level 5. You might’ve worked as a waitress, a retail assistant, or a shelf-filler.

Raising the income for skill level 5 workers is an even harder tasks than it is for skill level 4 workers. They are already paying very little tax, so there isn’t much room for new tax cuts. Raising the minimum wage is theoretically possible but politically challenging.

Let’s examine an alternative solution to ensure we got enough skill level 5 workers and that these workers are being set up to succeed financially.

I am not proposing a radically new idea here. If we look at the current population of working age (15 to 64) by skill level, we notice that 27 per cent of all skill level 5 workers are enrolled in an educational institution. They are levelling up; they are moving up the skill ladder; they are following the promise of the educational system that investing into your own education will pay off financially.

Unskilled work is naturally dominated by the under 30-year-olds (1.5 million or 44 per cent of all skill level 5 jobs). Our economic system needs a certain number of unskilled jobs, but as a share of the total workforce skill level 5 jobs only make up 15 per cent today. A decade ago, that figure was 17 percent and in 1989 that figure was 21 per cent. Today’s economy needs more highly skilled workers and fewer unskilled workers.

Maybe some skill level 5 jobs will be automated one day, but for now our economy needs over 500,000 sales assistants, over 125,000 commercial cleaners, over 100,000 kitchenhands, over 95,000 checkout operators, and over 50,000 shelf-fillers. These are all crucial, or shall we say essential, jobs.

Let’s encourage more of the population aged 15 to 29 that currently isn’t working into skill level 5 jobs. That’s a pool of about 3.9 million Australians. There are 1.4 million people aged 15 to 29 that are studying but aren’t holding a job and another 500,000 in that age bracket are neither engaged in education nor work. We can’t move all these 1.9 million people into skill level 5 jobs, but we can encourage some of them.

The problem that a skill level 5 job doesn’t pay enough to afford a flash home in a capital city isn’t an issue for young people gaining qualifications for higher income jobs. For students, unskilled work provides a temporary income that suffices for rent, a good night out, and a backpacking trip through Southeast Asia. Plus, at the risk of sounding like an old man, it probably does every young person some good to get real work experience rather than just acquiring mere academic and theoretical knowledge.

We won’t be eliminating unskilled work among the over-30 cohort, but we can try to shift the balance towards an even younger unskilled (but temporary) workforce.

All the while we would need to be encouraging more young people to get educated, to prepare for higher skilled jobs. On balance the university system is still delivering. A bachelor’s or master’s degree earns you a decent income. The TAFE system remains the gateway to the Australian middle class.

To ensure that unskilled work is but a steppingstone in peoples’ careers we will want to remove all barriers to the TAFE system. The biggest barrier being tuition, I think that Australia would benefit from a universally free TAFE system.