Unvaccinated Americans are significantly more likely to be infected by COVID-19 and die from it, according to the Centers for Disease Control and Prevention (CDC).

Newly released data from the federal health agency show that the unvaccinated were 11.3 times as likely to die to contract Covid as vaccinated people in August.

What’s more, people who hadn’t received shots were also 6.1 times as likely to test positive for the virus during that month.

The disparity between the jabbed and un-jabbed reached its widest point during early August as the Delta variant-fueled summer Covid surge ripped across the country.

During the month of August, unvaccinated Americana were six times as likely as vaccinated people to be infected with COVID-19, according to CDC data

Unvaccinated Americans are more than 11 times as likely to die of COVID-19 than vaccinated people, with the Delta variant expanding the gap between the jabbed and un-jabbed

The CDC published data on the national positive tests and deaths per every 100,000 Americans on Thursday.

A majority of Americans are vaccinated with 66 percent having received at least one shot and 57 percent being fully vaccinated.

During that same week, 1.2 out of every 1,000 vaccinated people died from Covid, a rate 12 times lower than that of the unvaccinated.

The weekly death rate of unvaccinated people stayed above ten over every 100,000 until the last full week of August, ending August 29, when the figure finally dropped to 9.14 out of 100,000.

While the disparity between the vaccinated and unvaccinated has existed since April, the earliest date for which data is available, it greatly widened  once the Delta variant became dominant in the U.S. in late June.

Around this time, many health officials were referring to Covid as a ‘pandemic of the unvaccinated’ due to how hard it struck them compared to those who had got their shots. 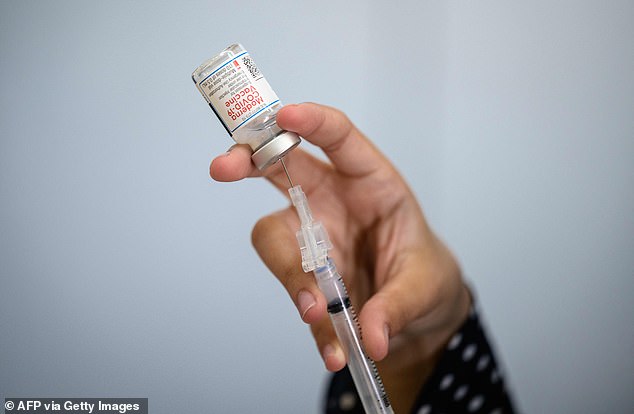 The Moderna COVID-19 vaccine (pictured) is the most effective at preventing infection and death, according to CDC data

By August, more than 90 percent of deaths and 80 percent of cases were among unvaccinated people.

The impact of the late summer wave also pushed many unvaccinated people to get the shots, as the nation experienced an uptick in vaccine demand in mid to late summer.

While the cases and deaths disparities both began to decline at the end of August, the hospitalization disparity only widened at the end of the month.

The data also shows that the Moderna COVID-19 vaccine has been most effective at preventing cases and deaths so far. 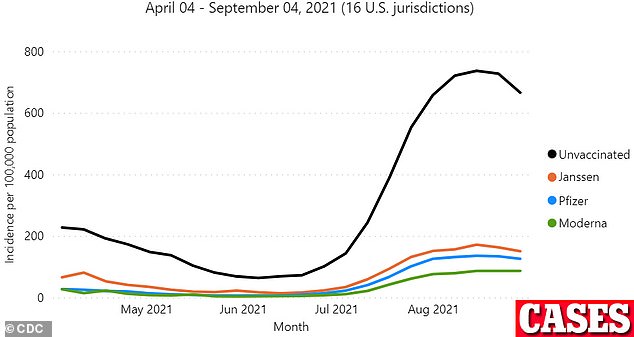 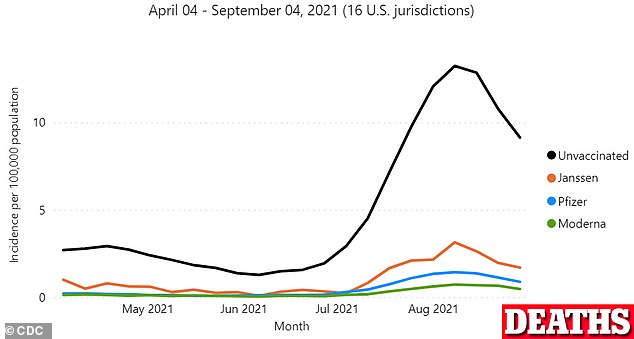 All three COVID-19 vaccines are also effective at preventing death from the virus, when compared to unvaccinated people

All three vaccines were effective at preventing infection, though, with 665.74 of every 100,000 unvaccinated people contracting the virus in the same week.

Moderna’s shot was more effective at preventing death as well, though there was a limited number of deaths recorded by recipients of all three shots.

All three COVID-19 vaccines in America are widely available, and a majority of Americans have little trouble accessing the shots at this point.

Many are hesitant to get the shots, though, and the country has made little progress towards reaching herd immunity in recent weeks.

Unvaccinated Americans are suffering as a result, though, with a recent analysis by the Kaiser Family Foundation (KFF) finding that more than 90,000 Covid deaths since June 2021 could have been prevented by vaccination.

Dr Krutika Amin, associate director of the Peterson-KFF Health System Tracker, which performed the analysis, wants health officials to do a better job making these disparities known to the unvaccinated public.

‘I think there are still ways for people to get out there and reach people who are still unvaccinated by continuing to inform them about how effective the vaccines are, [and that] the overwhelming majority of these deaths and also severe illnesses and hospitalizations, are among unvaccinated people,’ she told DailyMail.com last week. 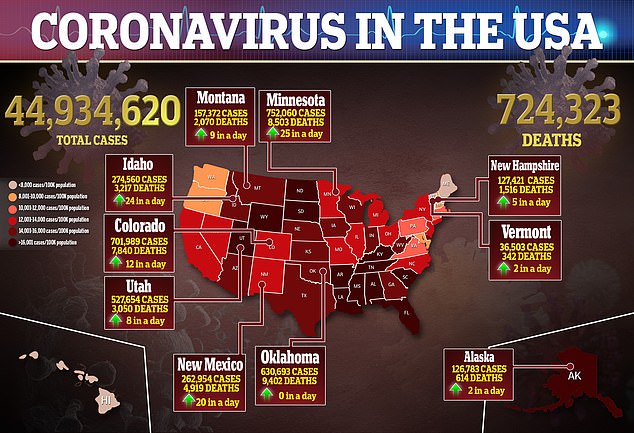