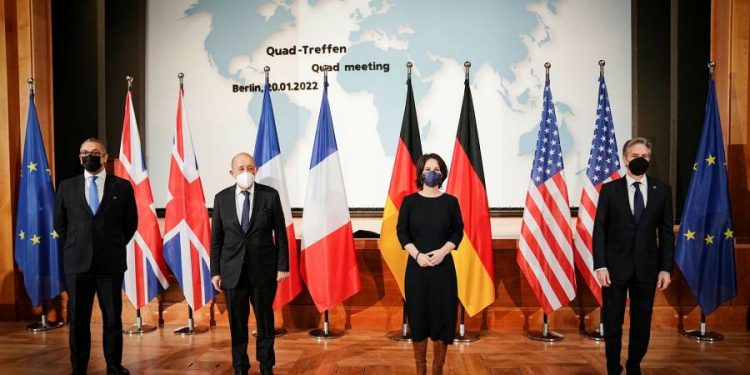 A flurry of last-minute security meetings are taking place in an attempt to convince Russia to refrain from invading Ukraine: US secretary of state Antony Blinken will meet his Russian counterpart in Geneva today after having travelled to Ukraine and Berlin, where he held a so-called quad meeting with the UK, France and Germany. We’ll look at the latest news and why prospects for a diplomatic solution are rather gloomy.

Today marks the deadline for Brussels’ taxonomy consultation and the independent experts who advise on the rules have delivered a stinging assessment of the European Commission’s inclusion of nuclear and gas. The FT has the scoop.

In tech regulatory news, the commission yesterday published its findings into a sectoral inquiry about the Internet of Things. We’ll unpack the findings and what this means for future competition probes and regulation.

Speaking of tech, the EU’s ambition to quadruple its own production to reach 20 per cent of global chip manufacturing by 2030 was on display at the World Economic Forum yesterday, with commission president Ursula von der Leyen announcing an EU Chips Act for early February. The proposals will include changing the bloc’s state-aid rules to allow subsidies for EU-based production facilities “that benefit all of Europe”. (Looking at you, Intel.)

And in anti-corruption news, the European Public Prosecutor’s Office in Luxembourg yesterday brought its first case to trial in Bulgaria — involving bribery in relation to EU farming subsidies.

This article is an onsite version of our Europe Express newsletter. Sign up here to get the newsletter sent straight to your inbox every weekday morning

Eight days after Russia’s foreign ministry declared talks with the US and Nato over averting war in Ukraine and wider issues of European security to be a pointless “dead end”, Russia’s foreign minister is in Geneva to talk to his US counterpart. It seems we are giving peace a chance, again, writes Henry Foy in Brussels.

The bad news is that when Sergei Lavrov and Antony Blinken sit down today the risk of conflict appears higher than a week ago. In that time, Russia has increased its military deployment close to the Ukrainian border to 106,000 troops and bolstered them with missiles that can hit Kyiv and infrastructure that experts say is to support a potential invasion. Joe Biden, US president, was blunt on Wednesday, saying that he expected Russia to “move in” and stage an attack.

What exactly the two men can say to each other to break a deadlock that endured over more than 10 hours of talks in two formats between US and Russian negotiators in the same city 11 days ago is unclear. The US and Nato have rejected Russia’s core demands of banning Ukraine from the alliance and restricting military deployments in eastern member states, while Russia has dismissed western counterproposals for talks on limits on missiles and exercises.

“These are difficult issues we’re facing. Resolving them won’t happen quickly. I certainly don’t expect we’ll solve them in Geneva tomorrow,” Blinken said during a visit to Berlin yesterday. “But we can advance our mutual understanding. And that, combined with de-escalation of Russia’s military build-up on Ukraine’s borders, that can turn us away from this crisis in the weeks ahead.”

The stop in Berlin — after visiting Kyiv — came at a good time. It allowed the US’s top diplomat to reaffirm Europe and the US were “speaking and acting together with one voice when it comes to Russia” after a meeting with ministers from Germany, France and the UK.

That remark took on added significance after Biden’s comments on Wednesday that a “minor incursion” by Russia would prompt US allies to “fight about what to do and what not to do”, and a pitch a few hours earlier by France’s President Emmanuel Macron for Europe to open its own channel of negotiations with Russia.

Both those statements sparked alarm among EU and Nato members — and in Biden’s case, in Ukraine — before being clarified by their respective administrations. But you can be sure Lavrov’s team took good note of the potential for division.

Lavrov’s spokesperson said the talks in Geneva would “evaluate the results of the negotiations” that took place last week with the US, Nato and OSCE members — negotiations that Russia has said were devoid of results. If they agree to talk about more issues, that would already be considered progress.

In total, Russia has deployed more than 106,000 troops to sites close to the Ukrainian border, according to western and Ukrainian officials. The forces include between 55 and 60 battalion tactical groups, which are highly mobile and strategically independent assault units. (More here.)

How prepared is the EU in case Russia invades Ukraine? Tell us what you think and click here to take the poll.

The EU’s competition chief has found a new world where rivals to Big Tech are potentially being driven out of business: the Internet of Things, writes Javier Espinoza in Brussels.

This means your fridge or toaster will one day be connected to the internet but the big players may already be colonising the space before smaller rivals gain scale.

Margrethe Vestager on Thursday released the final report on these trends, with voice assistants, such as Apple’s Siri or Amazon’s Alexa, in the spotlight.

She hinted at new antitrust cases emerging as a result of the findings. She said: “We are confident that the sector inquiry’s findings will provide guidance on the commission’s future enforcement and regulatory activity. We are also hopeful that it will stimulate companies to proactively address those concerns.”

She described the sector as having “high barriers to entry” with small players concerned about how Big Tech is amassing huge swaths of data.

Here are the main concerns when it comes to voice assistants:

What to watch today

Britain after Brexit — Keep up to date with the latest developments as the UK economy adjusts to life outside the EU. Sign up here

Are you enjoying Europe Express? Sign up here to have it delivered straight to your inbox every workday at 7am CET. Do tell us what you think, we love to hear from you: europe.express@ft.com.

Covax, the Developing World's Hope against COVID, Has Made It Only Halfway — Global Issues