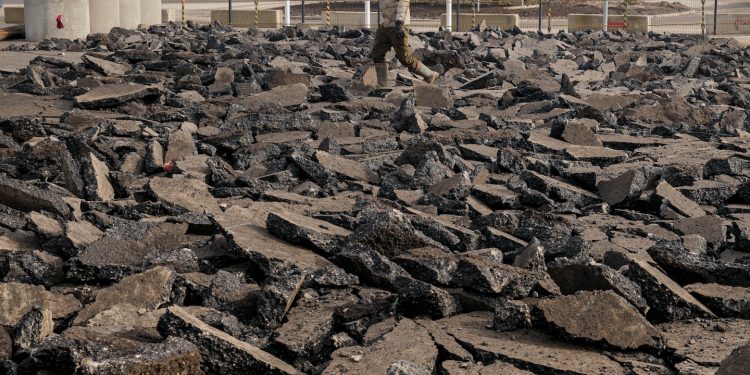 With the drumbeat of warnings accelerating, a growing list of nations have urged their citizens to depart Ukraine. On Saturday, the Biden administration took a further step, announcing it would reduce its embassy in Kyiv to a skeleton staff and pull military trainers back from western Ukraine.

The Kremlin, describing the two leaders’ first conversation since late last year, accused the United States of stoking conflict and portrayed Ukraine, rather than Russia, as the aggressor. U.S. officials have said Moscow, now conducting major military exercises in neighboring Belarus, could launch an attack at any time.

“The Americans are artificially inflating the hysteria around the so-called planned Russian invasion,” Kremlin aide Yuri Ushakov told reporters following the call. “The preconditions for possible provocative actions of the Ukrainian armed forces are being created alongside these allegations.”

At the same time, Moscow said it would pull its own diplomatic staff from Ukraine, citing “possible provocations by the Kyiv regime and third countries.” Foreign Ministry spokeswoman Maria Zakharova said the decision was in response to similar moves by other governments.

“We conclude that our American and British colleagues apparently know about some military actions being prepared in Ukraine,” she said, according to the ministry.

Months of Biden administration warnings took on new urgency this week, as national security adviser Jake Sullivan issued a stark assessment Friday that a Russian invasion could begin in coming days, likely starting with a barrage of air or missile strikes. Although Sullivan said U.S. officials could not say whether Putin has made a final decision, he said Russian forces are positioned for a powerful strike.

A senior U.S. official, speaking to reporters after Biden’s call, said there was “no fundamental change in the dynamic” between the two leaders during their discussion but said they agreed that senior officials would stay in touch.

“Russia may decide to proceed with military action anyway,” said the official, who spoke on the condition of anonymity to discuss matters of national security. “If it does, the damage to Ukraine, to European security, and, yes, to Russia, will be profound.”

The Kremlin meanwhile said Moscow would respond “in the near future” to recent U.S. and NATO proposals for further security talks. Russian officials have said that Western nations, even as they seek common ground on issues including arms control and military exercises, have failed to address Russia’s central demand of limiting NATO’s presence in the former Soviet sphere.

Russia has denied plans to attack and demanded that Ukraine, an increasingly pro-Western former Soviet republic that Putin considers part of his sphere of influence, be permanently barred from joining the Western NATO alliance. NATO has refused to budge on its open-door policy.

Tensions along Ukraine’s borders remained high on Saturday as Russia conducted its third day of military exercises in Belarus, the largest it has ever carried out in the Kremlin-allied state to Ukraine’s north.

The Kremlin has amassed about 130,000 heavily armed troops around Ukraine. Moscow is also carrying out naval exercises near the southern coastline of mainland Ukraine. In 2014, Russia annexed Crimea from Ukraine.

Putin spoke with Belarusian President Alexander Lukashenko, his closest ally in Europe, on Saturday about the need for “long-term international-law security guarantees for Russia,” the Kremlin said.

“We are ready for any steps from any side, from any borders,” he said during a visit to southern Ukraine. “We understand that such things can take place without warning.”

Thousands of protesters, many wearing Ukrainian flags draped across their shoulders, filed through central Kyiv on Saturday to support their country’s independence.

Demonstrators carried a large banner printed in English that said “Ukrainians will resist,” along with signs in the Ukrainian language saying “Ukraine will triumph.”

A senior Western military official, who spoke on the condition of anonymity to discuss sensitive analysis, said a worst-case scenario could involve Russian forces encircling Kyiv from three sides and pinning down Ukrainian troops in eastern Ukraine, where they have been battling Russian-backed separatists since 2014.

The official said Ukrainian forces would likely mount a fierce fight but were “qualitatively and quantitatively” outmatched by Russia’s larger, better-equipped military.

In such a pincer scenario, the official said, “at best they compel them to surrender; at worst they annihilate them.”

Diplomats, meanwhile, raced to steer the situation back from the brink, with scant signs of progress.

U.S. Secretary of State Antony Blinken, on a call with Russian Foreign Minister Sergei Lavrov during a tour of Pacific nations on Saturday, warned an invasion “would result in a resolute, massive, and united Transatlantic response,” the State Department said.

The United States and its allies have promised Russia will face harsh economic retaliation should it invade, but at times have differed about how far to go. Biden has ruled out sending U.S. forces to Ukraine.

Lavrov, for his part, accused Washington of pushing its allies in Kyiv to resolve its crisis in Ukraine’s contested Donbas territory with force, according to Russia’s Foreign Ministry.

French President Emmanuel Macron also spoke with Putin, for more than 90 minutes, Saturday, his office said, and held separate calls with Zelensky and German Chancellor Olaf Scholz. The German leader is due to meet with Putin in Moscow next week.

The State Department announced Saturday that consular services would be suspended at the U.S. Embassy in Kyiv, but that a small diplomatic presence in the western city of Lviv would handle emergencies. U.S. citizens needing passport or visa assistance should apply to embassies in neighboring countries, officials said.

The scene was calm at the American compound in Kyiv on Saturday afternoon, as staffers carried bags to waiting taxis amid light snow. Others appeared prepared for a long night in the office. One embassy staffer met a delivery driver on the sidewalk and carried pizzas back inside.

A senior State Department official, who spoke to reporters on the condition of anonymity to discuss sensitive matters, said that Americans who choose to stay in Ukraine should not expect the U.S. government to come to their rescue in the event of a potential Russian attack. He urged them to leave the country while commercial air and rail transport was still functioning.

“We do a great deal to provide support for our fellow citizens, but, as you know, there are real limits to what we are able to do in a war zone,” the official said.

Germany on Saturday joined a growing list of governments urging their citizens to get out of Ukraine as soon as possible. Britain, Latvia, Norway, the Netherlands, Israel, South Korea and Japan and others have issued similar advisories in recent days. On Saturday, Canada said it will relocate its staff from Kyiv to Lviv.

Dutch Airline KLM said Saturday it will stop service into Kyiv immediately, canceling a flight that was scheduled to arrive Saturday night. KLM has not flown over the eastern regions of Ukraine and Crimea since 2014, the carrier said, when a flight it codeshared with Malaysian Airlines was shot down over eastern Ukraine, killing all 298 people onboard.

Despite Washington’s diplomatic drawdown, military support to Kyiv will continue, the State Department official said, including with a new shipment of ammunition due to arrive Saturday.

The Pentagon announced Saturday it will also pull 160 members of the Florida National Guard out of western Ukraine, where they have been deployed on a training mission since November. The troops will be repositioned elsewhere in Europe.

A British junior defense minister said Saturday that British military trainers in Ukraine would leave over the weekend. “There will be no British troops in Ukraine if there is any conflict with Russia,” James Heappey told Sky News.

The Russian buildup has drawn NATO nations deep into Eastern Europe. U.S. officials confirmed Friday that an additional 3,000 troops from the 82nd Airborne Division will be sent to Poland, adding to the 1,700 troops already dispatched to that country, part of a flurry of reinforcement announcements from NATO nations in former Soviet and Warsaw Pact nations.

The U.S. assessment that Putin is likely to launch an attack is based partly on new intelligence that Russia is planning to stage a “false flag” operation serving as a guise for invading Ukraine. The precise date and nature of the alleged Russian operation was unclear. U.S. officials had earlier accused Russia of planning to stage and film a fake attack by Ukrainian military forces on Russia as a pretext for invasion.

Also on Saturday, Russia’s Defense Ministry said an American submarine had entered Russian waters off the Kuril Islands near Japan, where Russia’s navy was conducting an exercise, calling the alleged incident a violation of international law.

Navy Capt. Kyle Raines, a U.S. Pacific Command spokesman, said the American military does not comment on the location of submarines but said “there is no truth to the Russian claims of our operations in their territorial waters.”