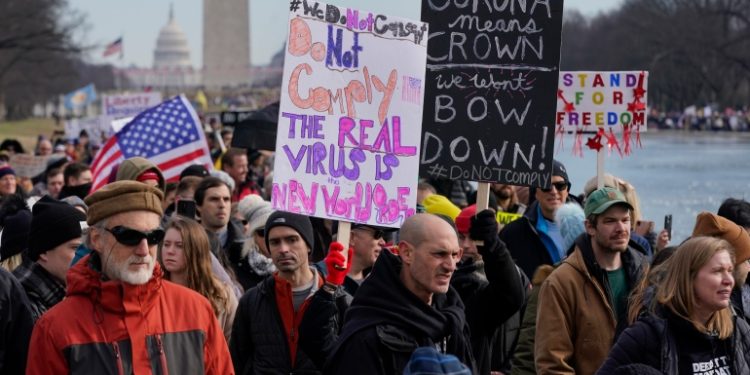 
Mask mandates in schools have turned into the latest political battleground in the United States’ fight against COVID-19, after seven school boards in the state of Virginia sued the governor over an executive order allowing parents to opt out of masking requirements.

Virginia’s Governor Glenn Youngkin, a Republican, issued an order banning mask mandates after being sworn into office on January 15. But the measure  – which came into effect on Monday – has been stirring confusion since its announcement.

Some districts have interpreted the order as being at odds with a state law that deals with COVID-19 mitigation in schools and have opted to keep pre-existing mask mandates in place for students.

With the order facing a legal challenge filed last week filed by a group of parents and another filed Monday morning by seven school boards, Youngkin urged patience and asked parents to listen to their children’s school principals for the time being.

“Listen to a principal today. And I know that there are some school systems that are doing things that are inconsistent with respecting the rights of parents. … Let’s respect it right now and let this legal process play out,” the governor said in an interview with Richmond, Virginia radio station WRVA.

But some observers took to social media over the weekend to urge parents to follow the governor’s order regardless of their school district’s position.

On Monday, as students reported to classrooms, there were no immediate reports of major issues requiring intervention by law enforcement.

The legal battle comes as debates over mask and vaccine mandates, as well as the broader issue of individual rights during the pandemic, have been intensifying and generating legal battles.

Earlier this month, the US Supreme Court blocked President Joe Biden’s effort to require employees at large businesses to be vaccinated against COVID-19 or undergo weekly testing.

Biden has been trying to find ways to get more Americans vaccinated and to wear their masks in order to reduce COVID-19 infections, which have been rising amid the spread of the highly transmissible Omicron variant.

Back in Virginia, the debate over mask mandates in schools took on a volatile turn last Thursday during a Page County Public Schools meeting.

A video aired on local news channels showed one mother telling the board her children would not be wearing a mask on Monday: “And I will bring every single gun, loaded and ready.” Authorities said they were investigating, and the school district said it would be increasing the police presence.

In a message to parents, Fairfax County Public Schools Superintendent Scott Brabrand said he hoped the lawsuit filed on Monday will allow for a swift resolution of the conflict between the governor and local boards that believe a mask mandate is a necessary public health measure.

“It is imperative that decisions about education and school safety are made locally in order to champion the best interests of our students and community,” Brabrand said.

The lawsuit argues the state constitution gives local school boards the authority to run their districts. It also cites a state law that requires school systems to follow federal health guidelines, which include recommendations for universal masking.

Supporters of the executive order say it is not in conflict with the state law because the US Centers for Disease Control and Prevention (CDC) only recommends mask-wearing and does not mandate it.

“We have held trend transmission levels low,” she said. “We have not had to shut a single school because of COVID. We’ve kept our kids in the classroom, and we’re going to do everything in our power to ensure that we continue that.”

Democrats commended the school boards who challenged Youngkin on Monday.

“Youngkin is quickly on his way to becoming the most divisive and authoritarian governor in our commonwealth’s long history,” state Senator Mamie Locke said at a news conference.