US womens soccer team finished its revolution – The Washington Post 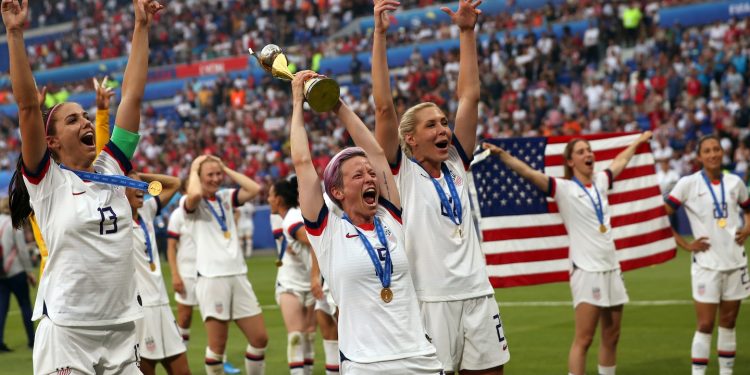 Money is respect. For too long, a U.S. women’s soccer player opened a paycheck that told her she was cut-rate merchandise and that her gold medals were cheap.

Finally, the U.S. women’s national team members will be properly valued as the national treasures they are. The new “identical compensation” deal for the U.S. soccer teams — negotiated in mutual agreement with their male counterparts — will pay the women equal salaries and World Cup bonuses. It’s a revolutionary deal, and that’s only fitting because it took a revolt to get here. Don’t ever forget how hard it was to win such a basic contract.

It took 25 years, strikes and work stoppages, and a rebellious, siege-like lawsuit — all to win simple, fair fiscal recognition of an unprecedentedly achieving women’s squad, winner of four World Cup titles and four Olympic gold medals, which has blown the door open to a fresh worldwide audience that pours new dollars into old suit pockets. No more devaluing pittances of 38 cents on the dollar for women who win trophies while men make exponentially more for losing in the group stage.

No more paychecks that read like personal insults from their intransigent federation. In 1996, the women’s Olympic gold medal team “made about $10 a day,” Julie Foudy recalled. When players asked for bonuses, a soccer official told them, “Don’t be greedy,” and suggested they should be happy they got a jersey that said “USA” on it.

Three years later, they packed the Rose Bowl and beat China to win the 1999 World Cup — and believed they were entitled to a modest raise, especially after the federation signed a $120 million deal with Nike. So, going into the 2000 Olympics, the women asked for $5,000 per month, up from $3,150. The federation balked. When Foudy and Mia Hamm rallied the team to stage a strike, one soccer official said dismissively, “They’re currently unemployed.” Only when the women threatened to skip the entire Olympics did they win their measly raise. “They have essentially ignored our successes over the past three years — including a World Cup win and an Olympic gold medal,” team captain Carla Overbeck said then.

By 2015, the Women’s World Cup final was the most-watched soccer game ever on a U.S. network, men’s or women’s — more Americans watched it than the NBA Finals — and it spurred a $20 million boost in revenue for the federation. Yet the federation was still dealing out petty fiscal insults. It gave the women just $60 per day in meal allowance while paying the men $75. This time, when the women complained and asked for more equitable terms, officials called them “irrational” — as if they were hysterics.

They filed a federal discrimination suit — and fought that legal battle for six years while still raking in the medals.

“Everyone is kind of asking what’s next and what we want to come of all of this,” Megan Rapinoe said wearily after the most recent World Cup victory. “It’s to stop having the conversation about equal pay and are we worth it.”

They’re worth it — they had always been worth it. The $24 million settlement they reached with the federation in February was merely an admission of guilt and a little bit of back pay.

All of it — every lousy, petty battle — mattered. As player’s association president Becky Sauerbrunn recognized, the new agreement was reached only because of “the strong foundation laid by the generations of women’s national team players that came before the current team.” This is as much a victory for the 99ers who made $10 as it is for Alex Morgan.

But, strangely, it’s not the real victory. The U.S. women’s soccer movement has never been strictly about pay, about just meeting a man’s wages. That’s an important struggle — and an agonizingly slow one, seeing as how the Equal Pay Act was signed into law in 1963 and we’re still counting the progress in cents. But women’s soccer has been about a much greater, broader and more dynamic shift — one that might meet the most radical and intriguing definition of feminism expressed by Germaine Greer, who has always differentiated between “equality feminism” and “liberation feminism.” Greer has asked a most pointed question: “Equality — with what?” Equality feminism seeks a limited and lame idea of sameness. Liberation feminism seeks a wholesale reimagination of possibilities.

From February: In its USWNT settlement, U.S. Soccer essentially made an admission: It was all true

In that context, an issue such as equal pay for women “becomes just window dressing,” Greer charged. “You look feminist because you’ve got women doing things. But they’re not doing anything for women.”

The U.S. national team over the past 30 years has done something for women — big things, actually, things we’re only starting to get the full measure of. The astronomically steep growth of the Women’s World Cup is hard to comprehend: The event, though just 30 years old, commanded 1.1 billion viewers in 2019, with record audiences in Brazil, France, Italy and the United Kingdom. And that is translating into opportunities once unthinkable: In England, the Women’s Super League signed an eight-digit deal with Sky Sports, CBS Sports and the BBC.

Over the past 30 years, women’s soccer activists from Foudy to Rapinoe have not just won a wage fight; they’ve won whole new potentialities for women and redefined what women’s bodies, “women’s work” and women’s relationships can be — and they’ve proved they can carry children along while they do it. Maybe the most radical part of the new contract is not the pay but the provision of child care for both the women’s and the men’s teams. The contract is nice — but the principle of the thing is the real liberation.