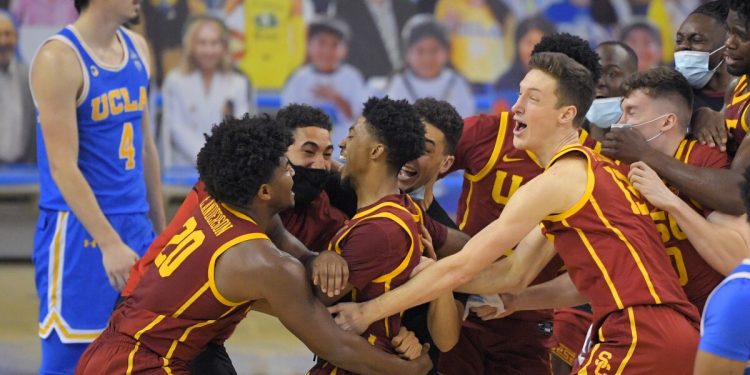 
aAs the weekend’s big game approached, David Singleton could have staged his own super bawl.

Footage of UCLA’s latest rivalry heartbreak taunted the senior guard as he watched on the team’s bus ride back from the Burbank airport after midnight Wednesday following their win at Stanford.

It played out just as Singleton remembered. The Bruins led USC by eight points with less than five minutes to go. They missed the front end of two one-and-one situations at the free-throw line in the final 44 seconds.

Then came the shot. The horrible, dreadful shot.

Tahj Eaddy took an inbounds pass in the corner and rose for the three-pointer that sustained the Trojans’ recent series supremacy, making them 4-0 in the rivalry since coach Mick Cronin arrived at UCLA.

Not even a trip to the Final Four, one step further than the Trojans’ run to the Elite Eight, could fully ease the sting of those setbacks, including two that came moments before the final buzzer.

“Coaches, we have a dilemma, man. It’s why very few of us keep our hair, survive long,” Cronin said this week. “You know, those things eat away at you.”

Across town, those same results have buttressed the belief that the No. 21 Trojans (20-4 overall, 9-4 Pac-12), despite a history that can seem as bleak as the final years of the Sports Arena, have put themselves on equal footing with the No. 12 Bruins (17-4, 9-3) heading into the latest showdown Saturday evening at a sold-out Galen Center.

“They have a lot of built-in advantages, and they have the tradition,” USC coach Andy Enfield said of the city’s college basketball darlings, who hold an 11-0 lead in national championships. “It’s a great school, a great program. But there’s no reason why USC basketball couldn’t get to that level.”

Enfield has guided USC to its winningest six-year stretch and could achieve a program milestone that hasn’t been reached in nearly 80 years with a victory Saturday. The Trojans have not won five in a row over the Bruins since — are you ready for this? — they posted 42 consecutive victories in the series from 1932 to 1943.

Touting a “Lion vs. Tyger” comparison, the post compared the statistics of USC point guard Ethan Anderson to his Bruins counterpart in the last four meetings between the teams, Anderson having produced better numbers in each category.

“I didn’t see that, sounds like a pretty cool graphic,” Campbell said without a hint of sarcasm, “but yeah, I’m not really worried about any graphics on social media, let’s get it done in real life.”

It was only a few weeks ago that these teams appeared to be careening toward a colossal confrontation reminiscent of the ones they enjoyed half a century ago when UCLA coach John Wooden’s championship teams faced sturdy resistance from the crosstown rivals coached by Bob Boyd.

The current Trojans rose as high as No. 5 in the Associated Press poll last month before the first of two stumbles against Stanford, part of a jagged stretch in which their shots stopped falling with regularity, and they were nearly upset by Pacific.

“We need to be ourselves and let the rest take care of itself,” USC forward Chevez Goodwin said. “There was a time when USC men’s basketball was a complete joke. So to be where we’re at right now, it’s really good company. Twenty wins, four losses. I’m pretty sure throughout the history of USC basketball, you wouldn’t expect us to be like that.”

Respect was slow to build, of course, as it always is around a program that hasn’t been to the Final Four since 1954. The Trojans have played only one ranked team and lost, failing to hold a late five-point lead against Arizona. That’s why it’s not just the rivalry intrigue that has prompted USC players and Enfield to label this the team’s most important game of the season.

“I’m stressing to our guys to take this game as life or death,” Anderson said, “because we need this win and to prove to ourselves that we are who we say we are.”

Ranked No. 3 as recently as last week, the Bruins have also been erratic, following a dominant homestand with back-to-back clunkers against Arizona and Arizona State. Looking alternately invincible and vulnerable, the team is trying to show the consistent resolve needed to carry it back to college basketball’s final weekend.

Both teams remain in a conference race that Arizona increasingly threatens to win in a runaway, the Bruins two games behind the Wildcats and the Trojans 2½ games back. That could make Saturday the equivalent of an elimination game.

UCLA may already be feeling a bit left out of the “Battle for L.A.” Only three players on its roster — Singleton, Jules Bernard and Cody Riley — have played in a victory over USC, meaning plenty of teammates want to join in on the fun.

“Since I’ve been here,” junior guard Jaime Jaquez Jr. said, “we haven’t beat them, lost on two buzzer-beaters, we still think about that, that still hurts to this day and we’re ready to go. We’re going to get ready and get prepared and do whatever we have to do to win.”

That could include watching those painful defeats. Singleton said he put on the most recent rivalry game during that late-night bus ride to give him motivational fodder to pass along to teammates later in the week.

For the Trojans, a playful twist on the Bruins’ fours-up hand gesture could be in order. Just add a zero before the four.

Update: Who is that masked man? It could be Isaiah Mobley if the USC star forward who broke his nose last week opts for a protective covering against the Bruins. While it was unknown if Mobley would wear the mask that was scheduled to arrive Friday, he was expected to play after sitting out the team’s lifeless showing against Pacific on Tuesday. UCLA freshman guard Peyton Watson remains day to day with a lower right leg bruise that forced him to miss the game against Stanford on Tuesday.

Lifting rules will have disproportionate impact on vulnerable, Sage warns

Jimmy Garoppolo’s shoulder recovery remains on schedule, could start throwing in next few weeks, per report

Deep in leafy and suburban...

Who is Dame Kelly Holmes, does she have a partner and what’s her net worth? – The Sun

KELLY HOLMES was born on...