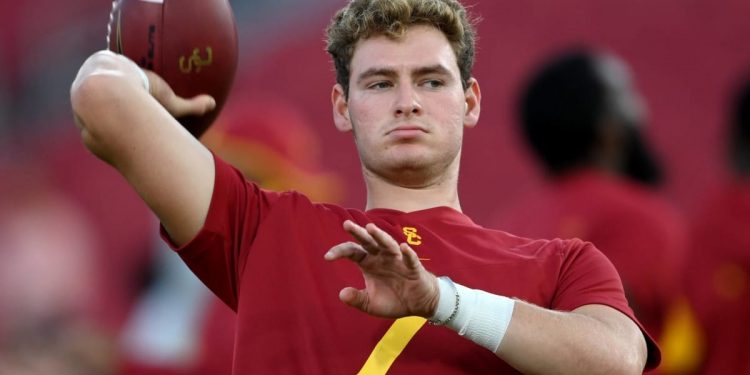 Quarterback Caleb Williams’s transfer from Oklahoma to USC may have shaken up the college football landscape, but it hasn’t bothered USC quarterback Miller Moss. In fact, the redshirt freshman is adamant that new head coach Lincoln Riley is giving both him and Williams a fair chance to win the starting quarterback job.

“Absolutely,” Moss said, via The Los Angeles Times’s Ryan Kartje. “Coach Riley has been great. He’s been honest and open with us about everything. Honestly, he really invests in his quarterbacks. That’s something that’s been refreshing, and I really appreciate it.”

Last year’s USC starter Kedon Slovis chose to transfer to Pitt while backup Jaxson Dart is now at Ole Miss. That left Moss as the incumbent quarterback at USC after a redshirt season in 2021.

In December, Moss said all he wanted from Riley was “a fair shot.” However, Williams announced his transfer to USC in February to follow Riley from Norman to Los Angeles, adding more competition in the room.

Despite Riley’s connection to Williams, Moss has had nothing but praise for Riley so far. Moss added Riley has been very straight forward with his plans for the roster since first arriving late in 2021.

Additionally, Moss is excited about the creative offense that Riley is bringing to USC, even though it makes the quarterback competition uniquely difficult.

“The hardest part is Coach Riley is so creative, so you never know what kind of wrinkles he’s going to throw in there,” he said. “I think that’s also probably the most fun and entertaining part about it. You never know what kind of stuff he’s throwing in the install for that day. You really have to stay on top of your stuff. You have to study. You can’t just leave this practice, go home, eat, and turn on Netflix and hang out until tomorrow. You have to get into your playbook and invest because if you don’t, you’re going to come out here and look silly.”

For more USC coverage, go to All Trojans