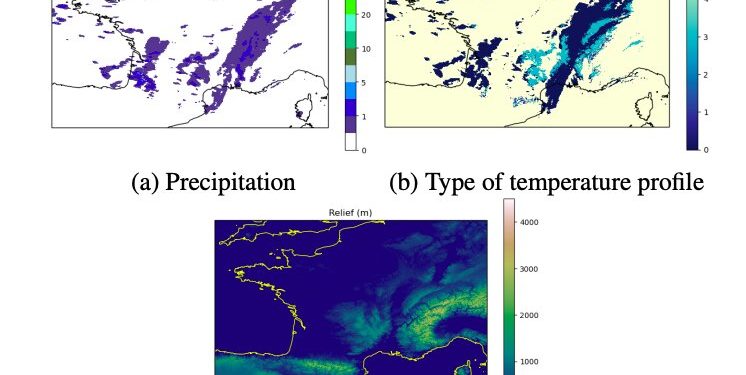 
Deep learning models have proved to be very effective for analyzing large amounts of data and accurately predicting future events. This makes them advantageous for a wide range of applications, including weather forecasting.

While meteorologists can now predict general weather trends for the next two to three days fairly well, climate change has led to a rise in unexpected extreme weather events, including thunderstorms, hailstorms, and hurricanes. Accurately predicting these sudden meteorological events a few hours in advance could help to prepare for them, potentially limiting their impact and adverse consequences.

Researchers at IRT AESE Saint Exupéry and Météo-France have recently developed three deep neural networks to predict impending precipitations. These network, introduced in a paper pre-published on arXiv, could allow meteorologists, governments, sport event organizers, and other organizations to predict the occurrence of storms, hurricanes, and other extreme weather events one to six hours in advance.

“We propose the use of three popular deep learning models (U-net, ConvLSTM and SVG-LP) trained on two-dimensional precipitation maps for precipitation nowcasting,” the researchers wrote in their paper. “We also proposed an algorithm for patch extraction to obtain high resolution precipitation maps.”

Today, most long-term weather forecasts rely on numerical models that can simulate atmospheric physics processes using images of the sky, radar data, and other available atmospheric data. While these methods can predict precipitations with good accuracy, they often need to carry out extensive computations and thus take a long time to make predictions. As a result, these methods often do not perform equally well on precipitation nowcasting, or the prediction of imminent precipitations.

The key objective of the recent work by Mohamed Chafik Bakkay and his colleagues at IRT AESE Saint Exupéry and Météo-France was to develop deep neural networks that could tackle precipitation nowcasting more effectively than numerical weather forecasting models. In their paper, they presented three different models, namely a U-net, a ConvLSTM and an SVG-LP network.

The three networks were trained on a dataset containing 20,352 high-resolution images captured by Météo-France using radar echo technology between 2017 and 2018. These images covered an area of approximately 1000 x 1000 km2 in France.

As directly feeding the high-resolution precipitation maps to the deep neural networks would saturate a computer’s GPU, the researchers also developed a patch extraction algorithm that can partition them into 256 x 256 patches. Instead of predicting precipitations for the whole maps, the networks can then learn to make predictions about these specific patches. Finally, they also developed a loss function algorithm that improves the quality of the images processed by the neural networks, making them less blurry.

Bakkay and his colleagues evaluated the performance of all the three models they developed in a series of tests, comparing the quality of the reconstructions they produced and the accuracy of their predictions. They found that while all three models captured the evolution of precipitation fields well, the U-Net model, which is a convolutional neural network (CNN) architecture, performed better than the other two models.

“The CNN-based method outperforms the RNN-based models,” the researchers wrote in their paper. “It is able to generate high value of precipitation and it can predict the future rainfall contour more accurately. Also, ConvLSTM outperforms SVG-LP, but it tends to blur later frames.”

In the future, the U-Net architecture developed by this team of researchers could be used to develop more effective tools to predict imminent precipitations and rainstorms. In addition, their work could inspire other teams to develop similar models to predict extreme weather events.