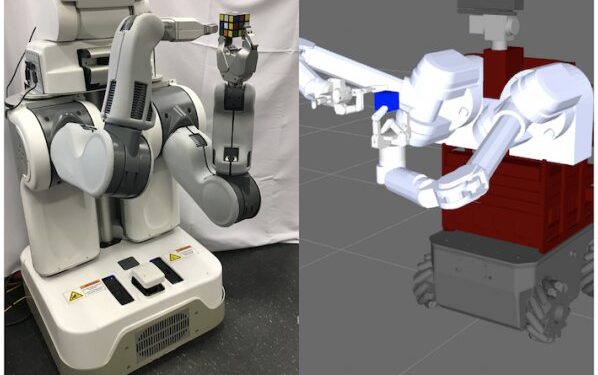 
Researchers at University of Washington have recently developed a new protocol to train robots and test their performance on tasks that involve object manipulation. This protocol, presented in a paper published in IEEE Robotics and Automation Lettersis based on the Rubik’s Cube, the well-known 3D combination puzzle invented by the Hungarian sculpture and architect Ernő Rubik.

In one of their previous studies, the team closely examined how robots acquire sequential manipulation skills, such as those required to handle Rubik’s cube. In their experiments, they observed a mismatch between what humans and robots find challenging, when completing the 3D combination puzzle.

“For us humans, it is challenging to decide what moves to make to complete Rubik’s cube, yet it is quite easy for us to physically manipulate and twist the cube as desired,” Boling Yang, one of the researchers who carried out the study, told TechXplore. “For robots, it is the other way around. Robots only need a few seconds to execute a search-based algorithm that can determine a sequence of moves that will solve the cube. However, executing the individual manipulations in the real world requires sub-centimeter positioning accuracy.”

Learning to manipulate Rubik’s cube can be very challenging for robots, as it involves a series of sequential movements. This means that the individual errors that a robot makes can accumulate, affecting its overall performance on the task.

The protocol developed by Yang and his colleagues assesses both a robot’s speed and accuracy in completing Rubik’s cube. As part of their study, the researchers demonstrated its potential and applicability in a series of tests.

In the first test, they used it to evaluate two baseline algorithmic techniques for improving a robot’s manipulation skills, using PR2, a robotic platform designed by Willow Garage. Subsequently, the team outlined a series of steps that would allow another renowned robot, called Herb, to complete Rubik’s cube. This confirmed that their protocol can be applied to a variety of robotic platforms.

“Robots can score highly on our protocol by successfully completing a large number of manipulations and/or minimizing the time required to perform manipulations,” Yang explained. “Our protocol thus establishes a baseline to which other researchers can compare their systems.”

In the future, the protocol devised by Yang and his colleagues could be used to evaluate different computational methods to enable robot manipulation and compare their speed, accuracy, and overall effectiveness. In addition, the team’s initial findings suggest that the protocol generalizes well across a variety of robotic platforms.

“We believe that having such a standard will allow robotics researchers to more clearly identify directions for progress in robot manipulation,” Yang added. “With respect to a more general audience, Rubik’s cube is understandable and even enjoyable to watch by almost everyone, thus it could serve as a gateway for students to be introduced to robotics. We are now interested in inviting researchers specialized in different areas, such as sensing, planning, and manipulator design, to try our benchmark and use it to advance robot manipulation in terms of accuracy and speed.”

Solving a Rubik’s Cube with a dexterous hand

Tech in a post-Roe future- POLITICO

A celebration outside the Supreme...

At the Bored Ape restaurant, your ApeCoin is no good now

Internet Explorer shutdown to cause Japan problems ‘for months’

20 great bars that celebrate L.A.’s LGBTQ community, past and present

Win one of the most luxurious off-roaders ever made