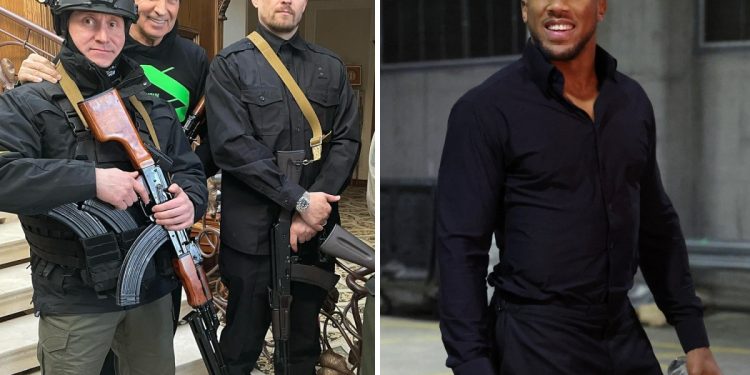 The 2012 London Olympic champion, undisputed cruiserweight king and September conqueror of Anthony Joshua for the WBA, IBF and WBO belts has joined the Kyiv Territorial Defence and slung a machine gun over his giant shoulder.

But the fearless southpaw flew straight back into the warzone and posted a string of emotional videos to Putin and the invading Russian hordes, before finally arming himself on Monday.

The AJ rematch, which promoter Eddie Hearn has been hoping to stage in late May or early June, now seems certain to be delayed.

But 32-year-old Joshua – who smashed Wladimir into retirement in 2017 – sent his support to Ukraine’s boxing fraternity fighting for peace in Eastern Europe.

“I have learned that sport and politics go hand-in-hand,” Joshua said.

“They have powerful voices and it is good that they are speaking up.

“They are not pushing for war, they are calling for peace. Good luck to them.”

Married father-of-three Usyk clearly has far more important things on his mind and he has appealed directly to the Russian people for help.

In an Instagram video the devout Orthodox Christian said: “Good morning to everybody. My name is Oleksandr Usyk. I’d like to speak to the people of Russia.

“If we consider ourselves as brothers, Orthodox ones, do not send your children to our country, do not fight with us.

“Also I’m addressing this to the President, Vladimir Putin. You can stop this war.

“Please just sit down and negotiate it with us without claims.

“Our kids, wives, grannies are hiding in the basements. We are here in our own country, we cannot do it any other way.

“We are defending. Stop this war, stop it. No War.”