Oxford’s Covid vaccine could save tens of thousands of lives because it can cut the likelihood of catching coronavirus and passing it on by around two thirds, scientists say.

Modelling produced by SAGE members from Warwick University predicted that more than 150,000 more people could die in 2021 if lockdown rules were lifted in March or April and vaccines did not stop people from spreading the virus.

But with a 60 per cent infection-blocking capability – slightly lower than the 67 per cent that Oxford claims its vaccine is capable of – this could be halved, saving tens of thousands of lives.

Oxford researchers, who are making their jab with pharmaceutical firm AstraZeneca and delivering more than a million of doses per week to the UK, confirmed last night that trials suggested the jab would stop most people from passing on the virus.

This is critical because uptake will not be 100 per cent and not everyone who gets the vaccine will be protected by it, meaning the virus will still be a danger to some.

Lifting lockdown after vaccinating people with jabs that don’t stop the spread, the Warwick experts warned, would lead to ‘an uncontrolled wave of infection in which only those successfully immunised will escape.’

Dr Paul Hunter, a scientist at the University of East Anglia who was not involved with the research, said social distancing could have to stay for another year in 2022 before it would be safe to return to normal. 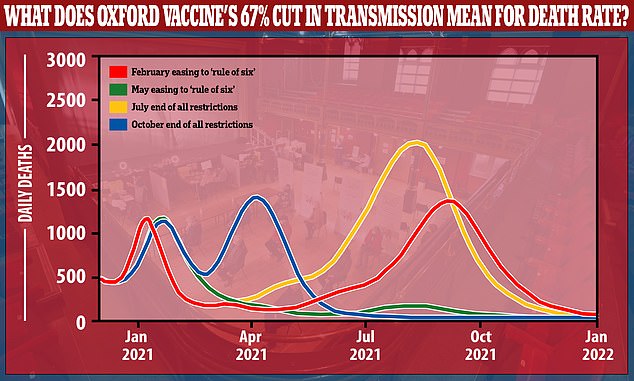 Research published in January by the University of Warwick suggested that if a vaccine could prevent 65% of transmission, as Oxford now says its vaccine does, the country’s death rate could be kept to the low hundreds per day or fewer from late March onwards if the rule of six is kept in place. The model is based on a large majority of the population having a vaccine with that level of effectiveness

It looked at how different vaccination and lockdown-lifting strategies could affect the future Covid-19 death rate in the UK. It used estimates based on high uptake in high-risk groups.

Although vaccines have been proven to prevent people from dying, the researchers said, the time it takes to roll them out, the fact that not everyone will have them, and their less-than-100 per cent efficacy would all mean some people were still at risk.

And a key factor of how bad a resurgence would be after lifting lockdown was how well vaccines prevent transmission.

Better infection-blocking and high coverage, combined with a more gradual easing of lockdown measures, could keep deaths down, they said.

But releasing too soon, or using vaccines that don’t stop the virus from spreading, could allow death counts to spiral again and potentially overtake 2020’s total.

The researchers based their model on two million people per week being vaccinated from February onwards with a delay of three months between doses.

Overall vaccine efficacy from different jabs, they said, was around 89 per cent in the community.

Oxford’s appears to be able to prevent 67 per cent of infections, but the same data is not yet available for Pfizer’s or other vaccines.

The researchers found that a vaccine that was able to block infections as well as prevent severe illness would help to reduce the R rate, which is the number of people each infected person passes the virus on to.

But even if they were able to prevent 85 per cent of transmission the R would still be higher than one if social distancing came to an end completely.

Looking at how the daily death counts could change over the course of 2021, the experts found that only vaccines blocking 85 per cent of infections, and a gradual release of lockdown rules over the course of the year, would stop thousands more from dying.

Jabs that block 60 per cent of infections might still allow the peak of daily deaths to hit 2,000 per day if lockdown was lifted gradually but completely from February to August, they found. The peak would likely come in September.

The daily death count would be closer to 2,500 with vaccines that didn’t block infections, or around 700 for ones that blocked 85 per cent. Those peaks would be earlier, in the summer.

On easing lockdown over the course of the entire year, into around December 2021, would lead to a peak of just under 1,500 deaths per day for the 60 per cent infection-blocking jab, with the peak in January 2022. 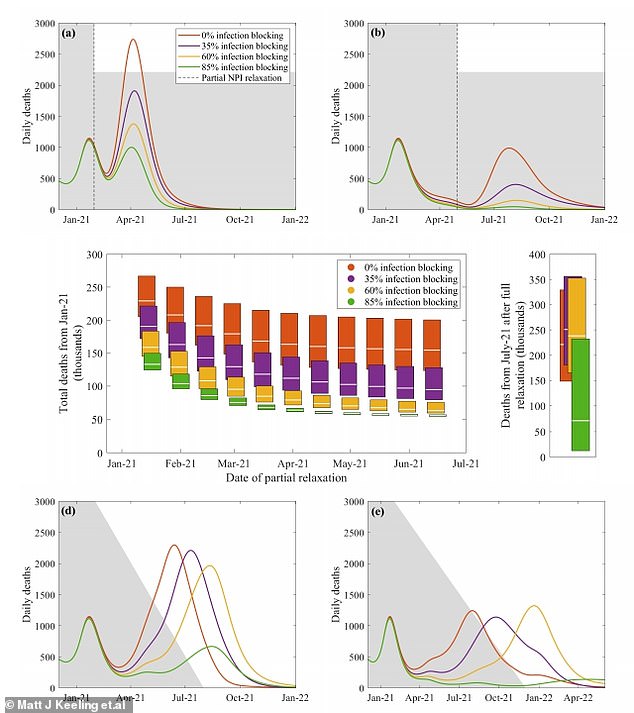 The Warwick University researchers produced graphs showing that a minimum of 50,000 more people were likely to die of Covid-19 this year and that the number on top of that would depend on how well vaccines block transmission of the virus (shown in centre graph – the white line represents the total death toll, with each column showing the month on which rules are lifted). And the four other graphs show daily death scenarios depending on how lockdown rules are lifted, the timing of which is illustrated by the grey shading. The yellow lines are the ones closest to the Oxford vaccine scenario

The Warwick researchers wrote: ‘Even maintaining [early September] levels of NPI [non-pharmaceutical interventions; social distancing rules] control and having a highly efficacious vaccine we estimate over fifty thousand deaths are likely to occur from January 2021 due to the slow decline in cases from its current high level.

‘Early relaxation of control measures or low infection efficacy can lead to a pronounced subsequent wave of infection.

‘If we wish to completely lift all restrictions once both phases of the vaccination campaign are complete, we predict a substantial outbreak with a large number of associated deaths.

‘When the vaccine is not infection blocking, removing NPIs triggers an uncontrolled wave of infection in which only those successfully immunised will escape.’

They predicted that between 99,000 and 123,000 more people could die in 2021 if lockdown and social distancing come to an end, even in an ‘optimistic’ vaccine scenario.

The research adds to concerns that social distancing rules will have to drag on for months longer than the hoped reopening of spring 2021.

Professor Paul Hunter, medicine professor at Norwich Medical School, said: ‘The big question around when we can get back to normal is still not possible to say for certain.

‘The key issue is what do we do about vulnerable people who have declined vaccine or are able to have the vaccine.

‘So I suspect we will have continue to have some degree of social distancing till at least spring 2022, if only to protect vulnerable individuals from severe disease who have declined immunization.

‘But as more vulnerable people are immunized the need for hospital beds will fall anyway and because even if not enough in themselves to bring R to below 1 they will certainly put a substantial downward pressure on R.

‘So our restrictions will not need to be as severe as currently, probably ever again in this pandemic. So the way I see it, we will see gradual reduction in restrictions probably starting the end of this month maybe early March and I guess that will mainly be about schools reopening, at first followed by other sections of society.

‘As we move into spring the better weather will also reduce R so even more easing as we move through spring and into summer.’

A single shot of Oxford University’s coronavirus vaccine is 76 per cent effective at preventing symptomatic illness and may have a ‘substantial effect’ on transmission, research suggests.

In a huge boost to the UK’s immunisation drive, analysis of the jab trials found the first dose was extremely successful in preventing people from falling ill within the 12-week time window between getting a second dose.

When the second dose is administered after three months, the jab’s efficacy is bumped up to 82.4 per cent, according to the study, which has been submitted to The Lancet for publication.

The results, from more than 17,000 trial volunteers, suggest Britain’s vaccination gamble to delay its dosing regimen has paid off.

In a bid to get wider vaccine coverage quicker, regulators pivoted from their original plan to give people their second dose after 21 days when the Oxford University/AstraZeneca jab was approved in late December.

They pushed back the second dose for 12 weeks in the hope that giving partial protection to as many vulnerable people as possible would drive down hospital admissions. 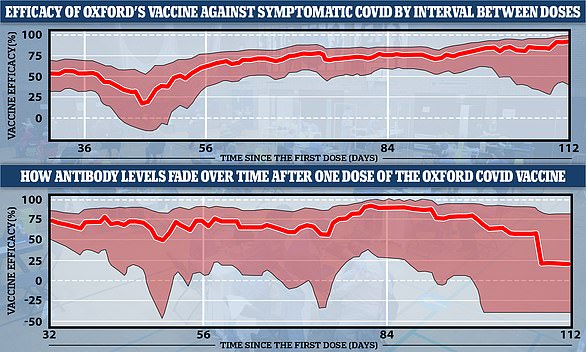 The strategy has helped make Britain a world-leader in vaccinations, with 9.6million people now injected with at least a single dose of either Pfizer’s or AstraZeneca’s jab.

Meanwhile, analysis of PCR positive swabs carried out on nearly 7,000 patients in the UK arm of Oxford’s trial suggests the vaccine may reduce transmission by 67 per cent.

Health Secretary Matt Hancock described the findings as ‘hugely encouraging’, adding: ‘It further reinforces our confidence that vaccines are capable of reducing transmission and protecting people from this awful disease.’

Dr Gillies O’Bryan-Tear, of the Faculty of Pharmaceutical Medicine, said the study suggested the Oxford-AstraZeneca vaccine could be the ‘holy grail’.

He added: ‘The data support the recommendation to delay the second dose of the Oxford vaccine out to 12 weeks.

‘If these vaccines reduce transmission to the extent reported, it will mean that the easing of social restrictions will be enabled sooner, than if we have to wait for herd immunity, which may never in fact be achieved because of insufficient vaccine population coverage.

‘That would be the holy grail of the global vaccine rollout, and these data bring us one step closer.’