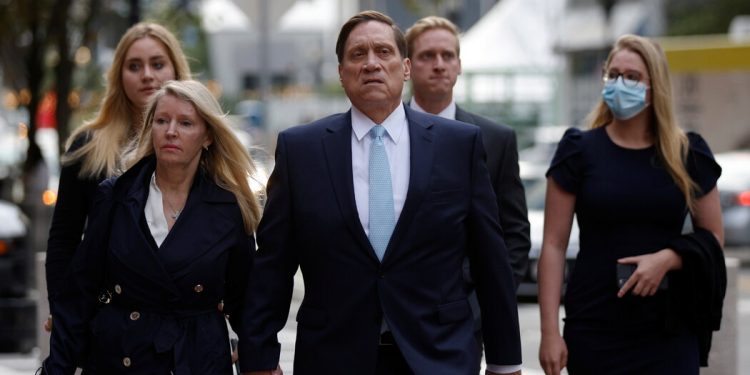 Lawyers for a private equity investor facing federal prison in the college admissions scandal known as Operation Varsity Blues filed an appeal on Monday seeking to have his conviction and 15-month sentence overturned.

The defendant, John B. Wilson, a former business executive, was convicted in October on bribery charges. He was accused of agreeing to pay more than $1.5 million to have his three children admitted to elite universities as athletic recruits, even though prosecutors charged that they lacked qualifications to play Division I sports.

Mr. Wilson, of Lynnfield, Mass., faces the longest sentence yet imposed in the admissions scandal, in which more than 50 parents and college coaches were prosecuted for conspiring with William Singer, a college admissions counselor, to arrange “side door” admissions into some of the country’s most prestigious schools, primarily by using slots on athletic teams.

Lawyers for Mr. Wilson, 62, say in court papers that the key claim against him — that he paid $220,000 to bribe his son’s way into a spot on University of Southern California’s water polo team in 2014 — is legally flawed.

None of the money was intended to personally enrich anyone at the school, they wrote in court papers.

“Donating to a university is not bribing its employees; the school cannot be both the victim of the scheme and its beneficiary,” said the filing in the U.S. Court of Appeals in Boston by lawyers for Mr. Wilson, including Noel J. Francisco, the former U.S. Solicitor General.

Mr. Wilson’s son, who had played water polo in high school, was admitted to U.S.C. based on exaggerated athletic credentials, according to prosecutors.

But Mr. Wilson’s lawyers argue that similar practices were commonplace at the university.

“The court excluded evidence showing that U.S.C. regularly dressed up donors’ children as athletic recruits, including for practice-only or non-athletic team-support roles,” the appeal said.

All the while, the appeal argued, Mr. Singer was pitching his arrangement to Mr. Wilson as common practice. In one taped conversation, he told Mr. Wilson that he was arranging “730 of these side-door deals at 50 or 60 schools.”

Later, in 2018, Mr. Wilson agreed to pay Mr. Singer $1.5 million to have his twin daughters admitted to Harvard and Stanford as purported Division 1 sailing recruits, but they never were enrolled.

By that time, Mr. Singer’s conversations with Mr. Wilson and others were being monitored by federal agents in the wide-ranging investigation.

In addition to counts of bribery and fraud, Mr. Wilson also was convicted of filing a false tax return because he deducted part of the payments to Mr. Singer as a business expense.

U.S.C.’s decorated water polo coach, Jovan Vavic, was convicted this year in connection with the Varsity Blues investigation, which had earlier ensnared the actors Lori Loughlin and Felicity Huffman, who both chose to plead guilty rather than take their chances with a jury.