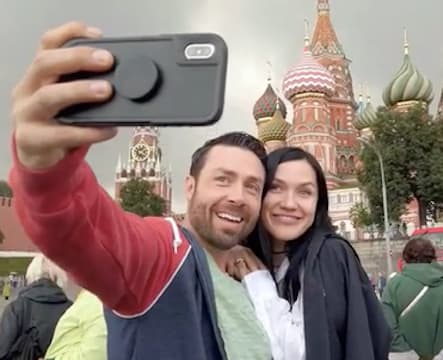 Varya Malina has broken her silence.


On a rather delicate and personal matter.


On Thursday, 90 Day Fiance star Geoffrey Paschel was sentenced to 18 years in prison after being found guilty in October of aggravated kidnapping, domestic violence and interference with an emergency call.


The charges stemmed from a domestic dispute that occurred in 2019 between Geoffrey and an ex-girlfriend.


Shortly after this ruling came down, Malina shared a post on Instagram that initially paid tribute to Geoffrey’s son, Kazhem, who died at the age of one.


She then delved into the sentencing itself.


“Thank you @jersey_kristina for this wonderful cake, he and his dad would absolutely love it. Unfortunately neither of them got to taste it.”


She continued as follows:


To be honest we didn’t expect much from this sentencing. 18 years? Alright, we passed the bottom, that means there’s only one way up!


The grounds for the appeal became even stronger.


Meanwhile the sky is still crying, I believe it’s because one little angel is very upset.


In a follow-up video posted on Friday, meanwhile, Malina said she was “emotionally exhausted.”


She emphasized an understandable need to focus on her mental health at this time, assuring followers her counselor “takes a very good care of me,” while citing April 14 as the date when a motion for a new trial will be held.


Her hopes appearr to be high that it may be granted.


“Thank you for checking on me. I really appreciate your support, my Instagram fam,” wrote Varya the day after the sentencing was handed out.


“Right now, I’m very short in my messages and I don’t answer any calls—only from the family members,” she continued.


“Please don’t misunderstand my current actions. I don’t ignore or underestimate you for goodness’ sake.


“It just takes so much energy and time to respond to the same questions over and over again.


And Malina then concluded on a positive note:


I want to focus on my own mental health and on numerous people who are affected by the same situation. My counselor takes a very good care of me. No worries.


The Varya you know keeps more love in her heart than hate and I try to catch up with her on that.


With that being said, my dear trolls, I’m talking about those who leave nasty comments here, thank you for bringing extra money in my pocket.


Looking forward to April 14th. Btw it’s my dad’s birthday, and he is my guardian angel. I know eventually everything will be alright.


Varya has made it clear that she intends to stand by Geoffrey, even asking fans to donate to a GoFundMe last fall that had been set up to raise money for her lover’s legal fight.


In court on Thursday, Paschel asked the judge for leniency, requesting that he be sent to rehab so he could return to his kids and family.


“As I’ve stated, this behavior towards these women is sick, it is sadistic,” the judge said prior to announcing the reality star’s sentence.


“It goes beyond the desire to inflict physical harm on these women. It speaks of a deep, psychological issue.


“I think Mr. Paschel has a desire to inflict as much emotional damage to these women as possible.”

How can we better increase housing supply in the US? : RealEstate