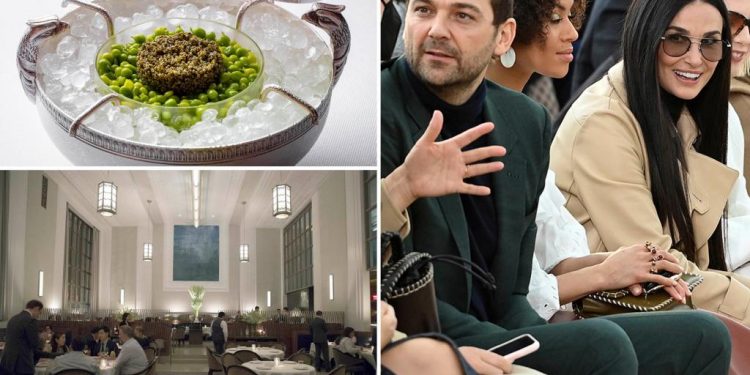 At the end of March, it was revealed that Eleven Madison Park chef/owner Daniel Humm was at once hot and heavy with Demi Moore and out cold at 425 Park, the new skyscraper where he’d long planned to have a restaurant.

The events were the latest dramatic plot twists in both the personal and professional life of Humm, who, with former business partner Will Guidara, once stood atop the city’s most acclaimed restaurant empire. In 2017, EMP took the No. 1 spot on the “World’s 50 Best Restaurants” list. It was the crown jewel in a rapidly expanding hospitality company, Make It Nice, that also included the buzzing NoMad and party-hard pop-ups in the Hamptons and Aspen. But, in 2019, Humm and Guidara abruptly parted ways. In the years since, Humm has confounded the restaurant world with a growing number of high-profile romances, a sudden pivot to veganism and a string of broken business deals.

“After he started getting really famous he started dating all of these celebrities and influencers,” said an insider, who noted that Humm was rumored to have dated Tyra Banks and Naomi Campbell and that he earned a reputation for being more about pleasure than business at food festivals in far-flung locales.

In 2019, shortly after it was announced that Humm and Guidara were splitting, it was revealed that Humm and Laurene Powell Jobs — the widow of Steve Jobs and a longtime vegan for the most part — were dating. She’s “allowed me to see myself more clearly, and I get to be more myself by knowing her,” Humm told Vanity Fair of their relationship. “She inspires me every day.”

Perhaps it was her influence that led to a shocking announcement in spring 2021: Humm would be reopening the restaurant with a fully vegan menu. “The current food system is simply not sustainable,”he told the New York Times. The new edict came shortly after the news that EMP would retain the three Michelin stars it’s had for years.

But the pivot to veganism might not be sustainable for Humm’s career. Last October, EMP’s vegan menu received a scathing 0-star review in the New York Times. The review also revealed a tasteless hypocrisy: Those who booked a private dining room could still order meat.

“The mistake we all make is [we think] we’re going to break down the barriers and be successful right away and for chef Humm he’s kind of starting over,” Amanda Cohen, the chef at noted downtown vegetarian restaurant Dirt Candy, told The Post. “It really is sort of a total re-brand. It would be like if I decided to open an all-meat restaurant,” she said. Cohen noted that she’s had an uptick in EMP employees coming in to “check out the competition.” She admires Humm’s bold moves, saying “I’m most impressed that he stuck to his guns.”

But some aren’t so impressed and think it’s a misfire.

“There is a way to eat meat the right way and to actually regenerate the Earth and respect the animal you’re raising,” said Ariane Daguin, founder and CEO of D’Artagnan, who provided natural, organic poultry and free-range meat and foie gras to EMP for years. “I feel let down.”

A second anonymous food world insider also claimed that Humm still eats animal products. (It’s been previously reported that Humm’s diet is 90 percent vegetarian.) Humm did not offer comment on this or other matters.

In late 2021, the five-star London hotel Claridge’s cut ties with Humm over his vegan vision for his restaurant there, Davies and Brook. It is “not a path we wish to follow,” the hotel said in a statement.

On Instagram, Humm said: “Standing behind this mission, and what we believe in, is most important and is unfortunately not something we can compromise on.”

He released a similar statement late last month after news of the broken deal at 425 Park hit.

“It saddens me to have to walk away from this project,” he said on Instagram. “But I knew in my heart that I needed to double down on my values and commit to what I believe is right for our community and our planet.”

The 46-year-old chef also seems to have walked away from Jobs, 58, and given his heart to Moore, 59, though it’s unclear when.

As recently as last September, Vanity Fair was declaring Humm and Jobs “a burgeoning art world power couple.” In June, he’d bought a $14.5 million Greenwich Village condo that certainly fit with that image, as did an ongoing friendship with running buddy Vito Schnabel.

The second insider claims the couple split after Powell Jobs left him for her personal trainer.

Meanwhile, on a recent Tuesday night, the once impossible-to-book EMP was about 70% full. An email sent to potential customers March 31, announcing the reservation book’s openings for May, was filled with cutesy jokes and a hint of desperation.

Those who have and do work with Humm say he’s not one to quit.

“If his heart is in a plant-based future then he’s going to go after it 100%,” said former EMP executive sous chef Bryce Shuman. “He’s not a person who does things really half way.”

But his determination might not be enough to make a $335 plant-based vegan menu hot.

“There’s doubt in the culinary world of whether he can make the kind of food that pops for a mass audience or whether he even f – – king cares at all,” the restaurant world insider said. “A lot of people don’t think he’s really with it in terms of keeping up with how it is that people want to eat.”