Venus and Jupiter shine together overnight, heres how to watch the spectacle live online – Space.com 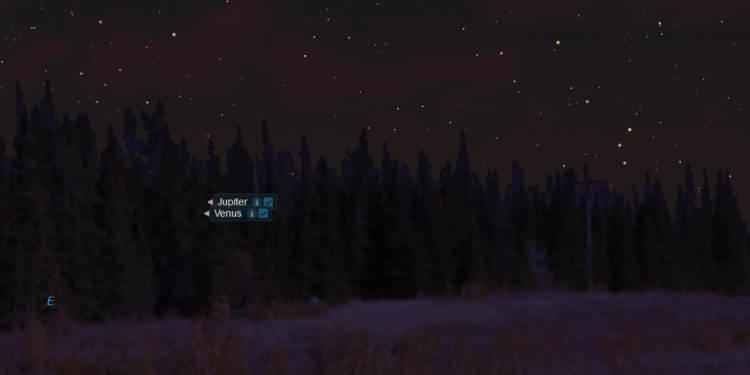 The planets Venus and Jupiter will meet in the night sky tonight and tomorrow morning in a stunning optical illusion known as a conjunction.

And if you don’t have access to a dark sky or a physical telescope to watch the spectacle firsthand, you can tune into a livestream by the Virtual Telescope Project to watch it live in detail.

The live feed will start on April 30 at 11 p.m. EDT (on May 1 at 0300 GMT) through the Virtual Telescope Project, which is operated from Cecceno, near Rome, Italy.

This particular conjunction brings the two brightest planets, Venus and Jupiter, within one-half degree of each other in the sky, equivalent to the apparent width of the moon. This is the closest Venus and Jupiter have appeared since August 2016; the next time the two planets will appear to cozy up to each other will be March 1, 2023.

Of course, in reality, the two planets are hundreds of millions miles apart. Venus, Earth’s closest neighbor and the second closest planet to the sun will be about 90.3 million miles (145.4 million kilometers) from Earth during the conjunction, while Jupiter is nearly six times farther away at 530 million miles (852.8 million km).

The closest visual approach on the plane of the sky will take place Sunday at 3 p.m. EDT (1900 GMT), but the duo will be outshone by the sun at that time.

During the encounter, Venus will be substantially brighter, at magnitude -4.1, while Jupiter will shine at magnitude -2.1, which is about one sixth as bright as Venus.

For skywatchers in the U.S. who get inspired by the livestream, the best time to spot the planetary duo close together will be before sunrise on Sunday (May 1) as the planets will begin to edge away from each other in coming days.

What causes cancer cells to activate in a normal body? – Times of India

What causes cancer cells to activate in a normal body? - Times of India