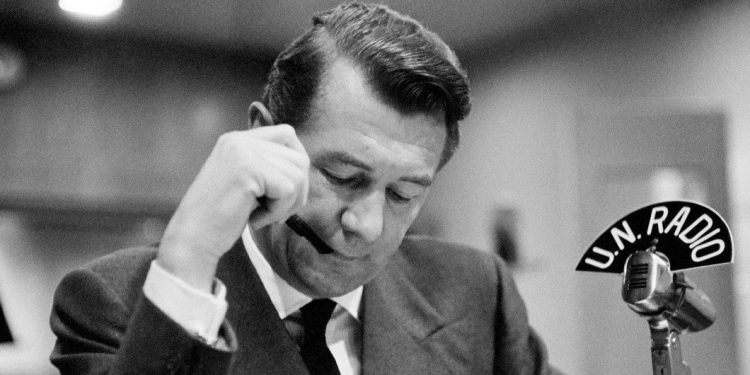 
To mark the occasion, the birthday in 1946 of the United Nations Radio service, we reached out to two veteran broadcasters and journalists, who recently retired from UN News.

Elena Vapnitchnaia was Chief of our Russian Unit, and Jerome Longue, the former Chief of our French Unit – both have served for many years in UN Radio and later with the integrated UN News Section.

On this World Radio Day, we asked them to share some pertinent memories of their work in radio and their views on the prospects and power of radio in general, to help counter the pandemic of misinformation, in the Internet age.

A glimpse of history

By 1950, UN Radio was broadcasting in 33 languages, and in 1980, UN peacekeeping missions started launching their own radio stations.

Our language networks offered a 15-minute daily programme of news, interviews, and features, from the various teams working at UN Headquarters in New York.

The first two decades of the century, have seen dramatic changes in the work of UN Radio: reels and cassettes gave way to digital media, and audio broadcasting has become enriched and enhanced by multimedia features, tying together text, audio, photo, video and other web-based graphics through the explosion of social media.

The UN’s radio services have been transformed into multidimensional news outlets that maintain their own websites.

Professionals with extensive experience in journalism, a broad outlook, open to the world, and always ready to help each other and share necessary information, have always worked at UN Radio.
Elena Vapnitchnaia

Today they create digital content and tell multimedia stories and disseminate these products, shows – and increasingly podcasts – via multiple platforms, including social media, not only in the six official languages of the UN, but also in Portuguese, Kiswahili, and Hindi.

UN Radio language services have always worked side by side, in a newsroom arrangement, within the UN Secretariat building in New York. “In the office, our neighbours on one side were journalists from the Russian service, on the other side we had our Portuguese colleagues. We could always hear them working, and over time we learned some words in those languages: for example, “Dobroe utro” (‘Good morning!’ in Russian) or “Obrigado” (‘Thank you!’ in Portuguese), recollects Jerome Longue, ex-chief of the French News Service, who worked for UN Radio and UN News for 30 years.

Elena and Jerome believe that such multi-culturalism and cosmopolitanism help when you are in the news business.

“Professionals with extensive experience in journalism, a broad outlook, open to the world, and always ready to help each other and share necessary information, have always worked at UN Radio. I am glad that I was able to work in such a team,” emphasizes former Russian service Chief, Elena Vapnitchnaia.

“For example, with a woman from Kyrgyzstan who came to a conference on the International Day of People with Down’s Syndrome. She was an activist and mother of a child with this syndrome, and she had also adopted a girl with the same syndrome.”

UN Radio and other news producers also often accompanied the Secretary-General on official trips and many times bore witness to major world events.

“We participated in the meetings with Colonel Gaddafi, with the presidents of Chad and Sudan, in the reintegration process for child soldiers in Sierra Leone, and also covered the signing of peace agreements, such as the one between Ethiopia and Eritrea,” recalls Jerome Longue.

And, of course, every year the opening of the General Assembly, brings heads of State and governments of UN member countries to New York.

For UN News staff, the High-Level week of the General Debate provides a rich harvest of news content and hard to get interviews with players on the world stage.

Many pundits, drawing from the old 80s hit, “video killed the radio star,” have falsely predicted the end of radio. This has been proven wrong because millions around the world continue to rely heavily and primarily on radio as their primary source of information and education – be it via radio stations, Internet platforms or podcasts on the smartphone.

Radio has transformed into its digital avatar, and it has not only retained loyal listeners but also attracted newer and younger audiences.

“The idea that radio will soon die has been talked about for a long time – since the moment the television appeared, but I think that radio has no plan to die” Jerome told us.

During the 2015 earthquake in Nepal, BBC Radio and other traditional soundwave-based stations were up and running well, serving as critical lifelines with remote communities cut off from the capital, long before other media formats could be accessed.

He further adds that radio serves as the best way to convey the voices of minorities and individual communities – because it does not require investment in any expensive equipment or the creation of a separate media stream online.

Elena believes that radio, unlike television or other media, creates a more intimate connection between the listener and the voices that come out on the radio.

“Unlike television, one doesn’t normally listen to radio and podcasts with the whole family or in a company of friends. Radio is usually turned on in a car, or during a walk, or when exercising”. That may be why radio continues to be so influential, credible, durable, and always accessible.

Radio in the age of disinformation

The importance of radio as a reliable source of information has increased a lot in recent years, with the era of fast-spreading fake/false news, both in social media networks and via other media.

“We all have to fight this scourge. And, of course, thanks to the audio interviews and live broadcasts from the spot, radio, as a communication channel, provides more reliable and indisputable information,” Jerome believes.

These principles, together with the UN’s position of neutrality and fairness, plus equality, have played an important role in the coverage of recent events, especially since the beginning of the pandemic, when fake and unverified information have flooded social media networks and other information platforms.

“During the COVID-19 pandemic, we made a lot of our productions based on the WHO recommendations: those were not only dry numbers and statistics, but also, for example, recommendations for parents who were self-isolating with children on how to keep fit during quarantine; as well the dissemination of information about the first vaccines – especially reassuring information about how they were being developed and tested thoroughly.

“We really hope that those publications and productions helped in the fight against misinformation and were useful for our listeners,” – the ex-chief of the Russian News Service says. “So, keep listening to UN News audio productions and broadcasts, via the airwaves, online platforms, and podcasts!”

Covid changed what singles look for in dating