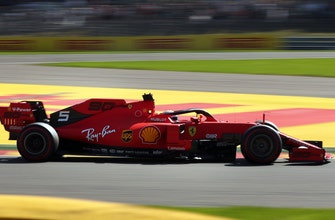 Vettel was .214 seconds ahead of teammate Charles Leclerc and .933 seconds clear of Red Bull rival Max Verstappen in sunny conditions on the Spa-Francorchamps circuit in the Ardennes forest.

Vettel’s last Formula One win was at the same venue last year.

World champion Lewis Hamilton spent the first half of practice stuck in the garage with a malfunctioning throttle pedal, which had to be changed. The championship leader was sixth fastest, behind his Mercedes teammate Valtteri Bottas and Red Bull driver Alexander Albon.

The session was briefly delayed after part of the engine cover on Lance Stroll’s Racing Point car broke, sending debris onto the track.

There is a second practice session later Friday.