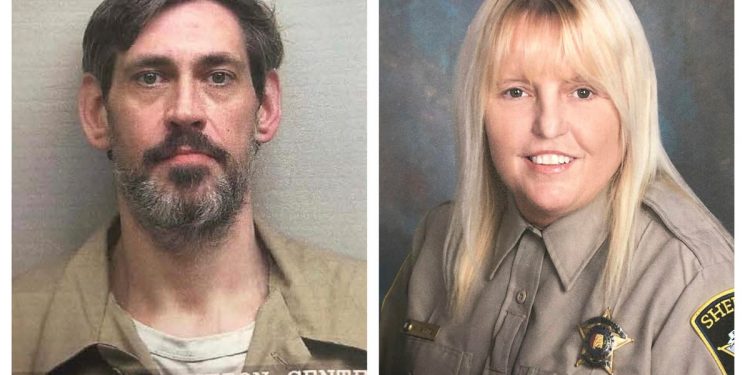 EVANSVILLE, Ind. – An escaped Alabama inmate and a former corrections officer who aided his getaway hid out for days before a tip from a car wash led to their capture, the sheriff said Tuesday.

Police said Vicky White and Casey White, who are not related, had a “jailhouse romance,” but there were few clues as to why Vicky helped the man facing a murder charge and serving a 75-year jail sentence on other violent offenses.

Over the weekend, law enforcement officials around Evansville, Indiana, put together the pieces that the pair might be in the area,  Wedding said.

Casey White told investigators he and Vicky stopped in Evansville to “get their bearings straight and then figure out their next place to travel,” Wedding said. They booked a hotel room for two weeks in the area, Wedding said. Authorities said they have surveillance video from a car wash where the fugitives switched vehicles.

MORE ON THE SEARCH:Ex-Alabama corrections officer who helped convict escape dies after being captured in Indiana, authorities say

MONEY WAS KEY, EXPERT SAYS:How did the Alabama inmate and officer evade authorities for so long?

Members of a fugitive task force pursued the two Monday afternoon after they were spotted leaving their hotel, Wedding said.

Police rammed the pair’s car and flipped it, and Vicky White shot herself, Wedding said. An autopsy was pending Tuesday afternoon, the sheriff said. Casey White told detectives he was armed with several firearms and intended to start shooting during the chase, but his car being flipped prevented him, Wedding said.

White was serving a 75-year prison sentence for kidnapping and attempted murder charges after he was convicted of trying to kill his ex-girlfriend and kidnapping her two roommates. He was set to go on trial next month on capital murder charges in a murder-for-hire slaying in 2015 and could face the death penalty if convicted.

“We got a dangerous man off the street today. He is never going to see the light of day again,” said Sheriff Rick Singleton of Lauderdale County, from where the pair fled in Alabama. Singleton expressed uncertainty about what prompted Vicky White’s involvement.

“I had every bit of trust in Vicky White. She has been an exemplary employee. What in the world provoked her, prompted her to pull a stunt like this? I don’t know. I don’t know if we’ll ever know,” Singleton said Monday.

The search began in late April after Vicky White told co-workers she was taking Casey White to a courthouse appointment. The couple never returned. Police established that the pair had a “special relationship” and planned their escape.

Evansville Police Chief Billy Bolin said Tuesday a vehicle Casey White and Vicky White used was spotted in the area May 2 when a police officer was doing a routine check of license plates in a parking lot to see whether any vehicles were reported stolen.

Authorities got a call May 4 about the vehicle at a carwash, but police could not immediately tow it, Bolin said. At that point, Bolin said, police had not established a connection between the vehicle and the couple who had fled Alabama.

Wedding said police had surveillance video that showed a pickup being left at the carwash and a Cadillac car being taken from the carwash.

The owner of the car wash provided security camera footage, which showed a man who looked like Casey White. Federal marshals had described White as 6 feet, 9 inches and weighing approximately 330 pounds.

“It wasn’t until over the weekend where it looked like more of a possibility that they had been here for sure. And once again, after six days, it was just hard to believe they were here. I wouldn’t think somebody on the run would stay in a community like Evansville for six days,” Wedding said.

Authorities tracked Casey White and Vicky White to the hotel when an Evansville police officer noticed the Cadillac in its parking lot Monday, Wedding said.

Wedding said investigators do not believe Casey White and Vicky White had any prior connection to Evansville. He said police recovered $29,000 from their vehicle. They had at least four handguns and an AR-15 rifle, he said.

Officers who pursued them in the car chase suffered minor injuries, Wedding said, but the officers’ actions prevented further injuries.

“They knew they were going up against a dangerous felon,” Wedding said.

Other vehicles found in search

The search was “back at square one” last week, Singleton said, after an abandoned 2007 orange Ford Edge was located in a Tennessee towing lot.

Singleton said Vicky White used an alias to purchase the vehicle, but it was abandoned and towed April 29, the day the pair went missing.

Surveillance video from the Lauderdale County Detention Facility showed Vicky White escorting Casey White to her patrol vehicle and leaving April 29. The patrol car was found abandoned at a shopping center that day.

Vicky White sold home, was set to retire before fleeing

Vicky White’s last day on the job was April 29. She had put in for retirement and sold her home for more than $90,000, authorities said.

“This escape was obviously well-planned and calculated. A lot of preparation went into this. They had plenty of resources, had cash, had vehicles,” Singleton said.

When Vicky White left the jail with Casey White, she told co-workers she was taking him to a mental health evaluation. No such appointment was scheduled, and Vicky broke department policy by transporting Casey alone, authorities said.