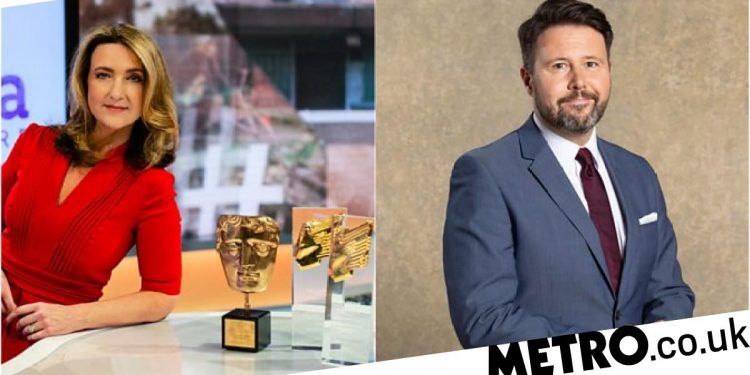 
Victoria Derbyshire and Jon Kay have been given the top new presenting gigs in a major shake-up for the BBC.

The former I’m A Celebrity…Get Me Out Of Here! contestant will become the joint lead presenter on Newsnight from September, while Jon, 52, becomes a regular presenter on BBC Breakfast from Monday to Wednesday, effective immediately.

Currently, Victoria, 53, co-hosts the acclaimed Ukrainecast podcast, which she will continue while on Newsnight, and presents on the BBC News channel, BBC World News and the News at One.

Before that, she hosted her own show Victoria Derbyshire on BBC Two and the BBC News Channel for five years, regularly helping the team to break stories while making headlines for her news-making interviews.

Victoria said: ‘I am so delighted to be joining the legend that is Kirsty Wark and the talented Newsnight team under new and ambitious leadership.

‘This is a special opportunity to take on one of the best jobs in British journalism and help shape the programme’s future.

‘I can’t wait to champion more stories about people’s lives while holding those who represent them to account.’

Meanwhile, Jon is a familiar face to BBC Breakfast viewers, having been part of the team for over eight years.

Recent stories he has covered include the Queen’s Platinum Jubilee weekend and interviewing Hollywood star Ben Stiller about his visit to Ukraine in his UN goodwill ambassador role.

Viewers may also recognise him from presenting  Panorama, Crimewatch and BBC Radio 5 Live Drive and covering stories such as general election campaigns and the Olympic Games.

Saying he was ‘over the moon’ with the new gig, Jon added: ‘I’m looking forward to bringing our brilliant viewers the very latest news each morning alongside my good friend Sally and the rest of the team.

‘Sitting on the famous red sofa is a real privilege while covering the stories and issues that matter to our audience – home and abroad.’

RE/MAX To Shutter Tech Platform booj, Lay Off Workers By End Of 2022

The 12 NFL teams that could actually win Super Bowl LVII

The 12 NFL teams that could actually win Super Bowl LVII