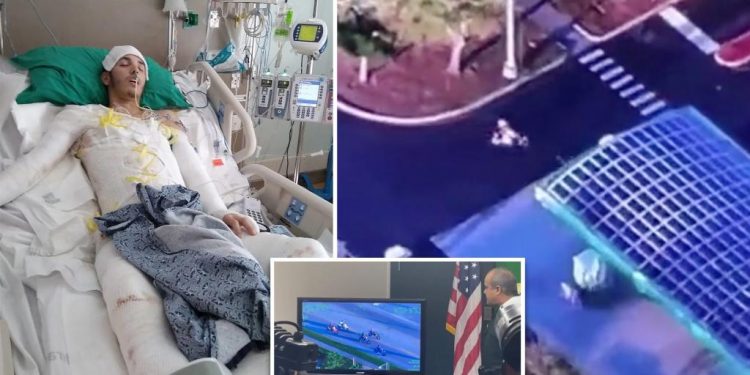 Dramatic footage shows the wild, high-speed chase involving the motorbiker who was “cooked alive” in a blaze that started when he was tased by a deputy.

Osceola County Sheriff Marcos Lopez held a press conference Thursday to share the footage and announce charges against the deputy who deployed his Taser against 26-year-old Jean Barreto on Feb. 27.

The footage shows a man on a dirt bike wearing an orange helmet, whom the sheriff’s office has identified as Barreto, fleeing from a patrol vehicle at a high rate of speed in Osceola County.

He could be seen weaving in and out of traffic, driving the wrong way and popping wheelies at speeds reaching 70 mph.

“It shows how reckless the suspect was, and how much danger he brought to himself as well as other members of the community,” the sheriff said, adding that Barreto blew through about 13 red lights on his 30-minute joyride.

Eventually, Barreto crossed into Orange County and stopped at a Wawa gas station to fuel up his bike.

As Barreto was standing at a gas pump, an Osceola County deputy who responded to the scene charged at Barreto, body-slamming him to the ground and knocking down his bike, which caused fuel to spill from its unlatched gas cap.

Surveillance video from the gas station shows another deputy, David Crawford, running up to the scene and deploying his Taser on Barreto.

Lopez said that before firing his stun gun, Crawford warned Barreto: “You’re about to get tased, dude.”

The Taser shot ignited Barreto’s gasoline-soaked clothing, engulfing him and the first deputy in a fireball.

Barreto’s attorneys said in a statement earlier this week that their client was “cooked alive” as a result of Crawford’s “reckless, foolish, unnecessary” actions.

The deputy who tackled Barreto suffered third-degree burns to half of his body, and two other deputies sustained minor burns.

No gun was found in Barreto’s possession, and his lawyers confirmed that he was unarmed and had no prior criminal record.

Crawford faces a misdemeanor charge of culpable negligence, which is punishable by up to a year in jail, authorities said.

“Deputy Crawford was aware there was gas in the direct and immediate area,” Lopez explained. “We know this because he says on bodycam, ‘Kill the pump, kill the pump! Gas!’”

The Office of the State Attorney will review the charge against Crawford, who is on paid leave. He will also face an internal investigation, which will look into his alleged departmental policy violations.

Barreto will be charged with fleeing and eluding law enforcement, reckless driving, and resisting arrest without violence, authorities said.

Barreto’s attorneys slammed Lopez for having his own detectives investigate the incident, instead of handing off the case to state authorities.

“Sheriff Lopez continues to double down on and promote his dangerous policies, practices, and procedures, taking no responsibility that such policies have led to this horrific outcome,” the lawyers said.

“He is wrapped and unwrapped in gauze daily, bleeding profusely still as he doesn’t have the requisite amount of skin to contain his body fluids,” they wrote. “He is without skin on most of his body, his skin having been burned off.”

In the coming days, Barreto will be placed in a medically induced coma to remove necrotic tissue from his body in preparation for a groundbreaking procedure at Orlando Health, which has involved growing human skin tissue from a 4-inch patch of unburned skin on Barreto’s body to be used for grafting.

Last week, the Florida state fire marshal released an investigative report, which concluded that an electric discharge from the deputy’s Taser was the likely cause of the fire, WFTV reported.