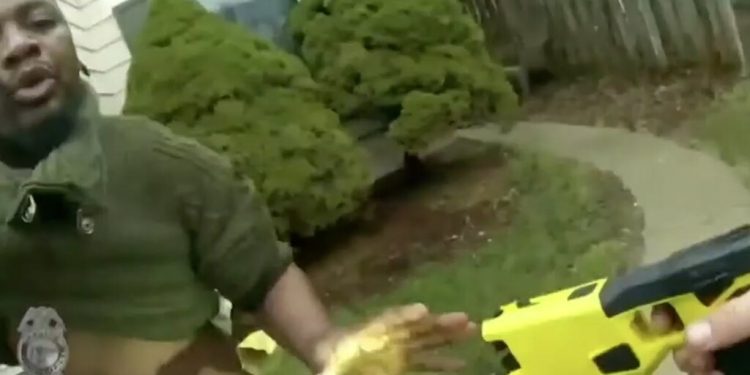 On the morning of April 4, a police officer noticed a car with an improper license plate traveling through a tree-lined residential neighborhood in Grand Rapids, Mich.

It was rainy and just after 8 a.m. After the officer pulled over the sedan, its driver — Patrick Lyoya, a 26-year-old Black man — stepped out, according to video footage of the incident.

“Stay in the car!” the officer said, adding: “Dude, I’m stopping you.”

The officer asked for Lyoya’s driver’s license, and after briefly speaking to the passenger in his car, Lyoya closed the door, turned his back to the officer and took a few steps away.

That is when the police officer, whom authorities have not named, grabbed Lyoya, kicking off a roughly 2 ½ minute struggle in which Lyoya, according to Grand Rapids Police Chief Eric Winstrom, appeared to grab the officer’s Taser. It ended when the officer pulled out his gun. Lyoya was shot in the head, Winstrom confirmed.

The Grand Rapids Police Department on Wednesday released multiple videos of the incident that rocked the area, sparking protests and questions about whether the shooting that left the 26-year-old Congolese refugee dead was justified.

Winstrom told reporters at a news conference Wednesday that the department is “going to look into” whether Lyoya understood the officer’s orders. He also said, to his knowledge, no weapon other than the police officer’s gun and Taser was found at the scene. Careful not to make firm conclusions about the shooting, the chief said he viewed it as a “tragedy.”

Other city officials said they were troubled by the incident.

“When I saw the video, it was painful to watch — and I immediately asked, ‘What caused this to happen?’” said Grand Rapids City Manager Mark Washington. “And what more could have been done to prevent this from occurring?”

The shooting took place nearly two years after a Minneapolis police officer murdered George Floyd, an event that touched off nationwide protests against police brutality and calls for dramatic reform.

Yet in the years since, the rate of police shootings has remained steady, as have the victim demographics, according to tracking by The Washington Post. Black people have been shot at more than twice the rate as White people, and most shooting victims are young and male, according to a Post analysis. So far this year, there have been 255 shootings.

On Wednesday night, after videos of the incident were released, barriers went up at the Grand Rapids police station as hundreds marched downtown, chanting and demanding the department release the name of the officer who shot Lyoya, WZZM reported. Winstrom on Wednesday declined to publicly identify him, saying only that he has been on the force for seven years and has been placed on paid leave.

The Michigan State Police are leading the criminal investigation into the shooting and will forward evidence to county prosecutors, officials said.

Before the videos were released, Lyoya’s father, Peter, told MLive through an interpreter that his family came to the United States in 2014 from the Democratic Republic of the Congo to escape violence.

“I am the parent,” he said. “What has happened to me because Patrick has been killed, I don’t want another parent to go through what I went through.”

“He had his whole life ahead of him,” she said of Lyoya.

The department released four videos that showed the incident from various vantage points — including from the passenger riding with Lyoya and the officer’s body camera, which turned off as the men struggled and did not capture the shooting.

On April 4 around 8:11 a.m., the officer stopped Lyoya in Grand Rapids. Police said Wednesday the traffic stop pertained to improper registration on the car.

The videos show that after Lyoya was pulled over, he almost immediately stepped out of the vehicle. As the officer told Lyoya to get back in the car, he approached the 26-year-old. Lyoya asked why he was stopped. The officer told him that his license plate did not match the car and asked for Lyoya’s driver’s license, also questioning whether he spoke English.

After the officer asked for Lyoya’s license, Lyoya briefly spoke to the passenger in his car. He then closed the door to the sedan, turned his back to the officer and took several steps away. The officer then grabbed Lyoya, and the 26-year-old began to struggle. Lyoya broke free and ran away from the officer on the sidewalk and onto a house’s front lawn, where the officer tackled Lyoya.

“Get your hands behind your back!” the officer said.

But the struggle continued, with Lyoya appearing to try to break free and the officer struggling to maintain control. Moments later, the officer took out his Taser. Just after the officer discharged it, Lyoya asked what the officer was doing and appeared to grab the weapon.

“Let go of the Taser!” the officer said.

After about a minute of struggling on the ground, the officer — hunched over as Lyoya was face down on the grass — pulled out his gun as he told Lyoya again to drop the Taser. Seconds later, the officer fired, and Lyoya stopped moving.

Lyoya’s father told MLive that he and his family came to the United States for peace and protection. But “there was no safety here for Patrick,” he said.