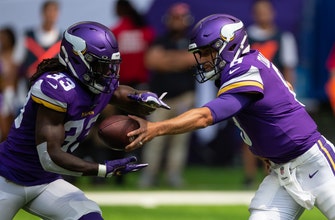 MINNEAPOLIS — Dalvin Cook had an 85-yard touchdown run for Minnesota, the highlight of an otherwise rough first half by the first-team offense during a 20-9 victory by the Vikings over the Arizona Cardinals on Saturday.

Cook scored early and Mike Boone crossed the goal line late, as the Vikings totaled 190 yards on 29 carries. The ground game was by far the best development of an afternoon when Kirk Cousins went just 3 for 13 for 35 yards while taking two sacks and Kaare Vedvik missed field goals from 43 and 54 yards.

Rookie Kyler Murray, the first overall pick in the draft to whom new coach Kliff Kingsbury and the Cardinals have turned to lead the reconstruction project, was relatively sharp while going 14 for 21 for 137 yards over the five possessions against a Vikings defense that was almost at full strength. Three of the drives ended with a successful field goal by Zane Gonzalez, a result that surely made the Vikings envious.

Vedvik, who has been given an extended evaluation as both a kicker and a punter, made both of his extra point attempts, at least, while incumbent Dan Bailey took the afternoon off. Matt Wile punted six times for an average of 47.3 yards, leaving no more clarity about the specialists than when the month began.

Cousins was under frequent pressure and had multiple passes knocked down at the line, including one deflection by rookie Zach Allen, who had a half-sack. Another Cardinals draft pick, KeeSean Johnson, stood out on the other side of the ball with seven receptions for 85 yards on seven targets.

One of the most discouraging aspects of the performance for Kingsbury and his staff were the 14 penalties for 111 yards, including two false starts called on backup quarterback Brett Hundley in a three-snap stretch late in the second quarter for apparently lifting his leg to signal a receiver to start his motion.

The Cardinals were last in the league last season in rushing defense, allowing an average of nearly 155 yards per game that was bumped up by the Vikings here last Oct. 14 in a 27-17 victory fueled by a career-high 155 rushing yards from Latavius Murray.

Cook made the Cardinals look bad again, when he took a handoff to the left and veered right behind a key seal block by new right guard Josh Kline. The new zone blocking scheme directed by offensive coordinator Kevin Stefanski, senior offensive adviser Gary Kubiak and offensive line coach Rick Dennison ought to be a good fit for Cook with his keen cutback ability. The touchdown run was the longest in a preseason game in Vikings history, topping a 76-yarder by Jordan Todman in 2012.

Cardinals: New WR Michael Crabtree, the 11th-year veteran who signed with the team earlier this week, did not suit up. Neither did CB Patrick Peterson, the eight-time Pro Bowl pick facing a six-game suspension to start the regular season for violating the NFL’s policy on performance-enhancers.

Vikings: DT Linval Joseph, who joined the team for practice this week for the first time since offseason shoulder surgery, was held out of the starting lineup, as was SS Harrison Smith. On offense, WR Adam Thielen rested, and RT Brian O’Neill stayed on the sideline again, after returning to the field this week following a three-week absence because of a right arm injury.

Cardinals: Play at Denver on Thursday night in their final exhibition game. The regular-season opener is Sept. 8 against Detroit.

Vikings: Play at Tennessee on Thursday night in their final exhibition game. The regular-season opener is Sept. 8 against Atlanta.