Hall of Fame coach Jay Wright is retiring after 21 seasons as head men’s basketball coach at Villanova, a shocking move that comes just weeks after he led the Wildcats to the Final Four.

Villanova said Wednesday that Wright will begin a new role as special assistant to the university’s president. Fordham’s Kyle Neptune, who spent 10 years under Wright as a video coordinator and an assistant coach, will take over as Villanova’s head coach.

A news conference featuring Wright, Neptune and vice president and director of athletics Mark Jackson is scheduled for Friday morning.

“Over the past 21 seasons, I have had the opportunity to live out a professional dream as the head coach at Villanova,” Wright wrote in a statement. “Patty and I have been blessed to work with incredible, gifted young men who allowed us to coach them and brought us unmatched joy. We cannot overstate our gratitude to the players, coaches, and administrators who have been with us on this path. It has been an honor and a privilege to work at Villanova, especially under Father Peter and Mark Jackson.

“Now, though, it’s time for us to enter a new era of Villanova basketball. After 35 years in coaching, I am proud and excited to hand over the reins to Villanova’s next coach. I am excited to remain a part of Villanova and look forward to working with Father Peter, Mark and the rest of the leadership team. Once a Wildcat, always a Wildcat.”

Wright has been solicited for several NBA jobs through the years, but sources told ESPN on Wednesday that Wright’s intention is to retire from coaching, not only Villanova. Wright enjoyed his experience coaching Team USA under Gregg Popovich in recent years, but becoming an NBA head coach has held increasingly less appeal with him, sources said. He listened to overtures but never seriously considered leaving Villanova for any of them.

Wright started to share with close friends on Tuesday night that he was eager to move on to the next phase of his life without coaching, according to sources.

“He’s fully at peace with the decision,” a source close to Wright told ESPN on Wednesday night. 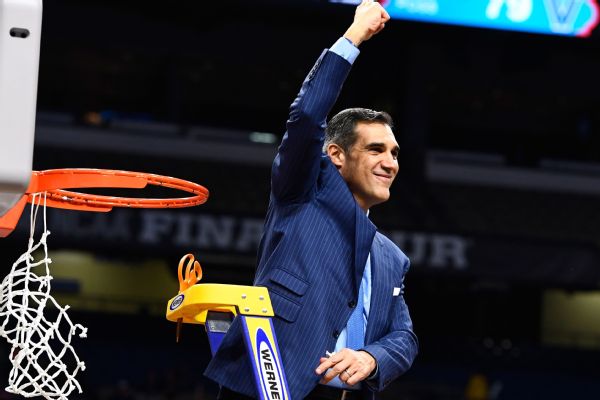 4: Coaches in D-I history to leave a school after winning multiple titles in last seven years as head coach (Wright, John Wooden, Ed Jucker, Phil Woolpert)
4: Final Four appearances since 2009, tied with Tom Izzo and John Calipari for most among head coaches
5: Number of coaches to make at least 16 of the past 17 NCAA tournaments (Wright, Mark Few, Tom Izzo, Bill Self, and Mike Krzyzewski)
6: Big East Coach of the Year awards
6: 30-win seasons for Wright, one more than Jim Boeheim, Tom Izzo and Rick Pitino and sixth-most in men’s D-I history
8: Big East regular-season titles for Wright, trailing only Jim Calhoun (10) and Boeheim (10) for most in conference history
8: NBA draft picks since 2017, fourth most behind Duke (15), Kentucky (15) and Florida State (9)
9: Straight NCAA tournaments, fifth-longest active streak in D-I
520: Wins against 197 losses since taking over in 2001
ESPN Stats & Information

Neptune served as a video coordinator for Villanova from 2008 to ’10, and then returned as an assistant coach under Wright from 2013 to ’20.

“When looking for a successor, we wanted a candidate who could navigate the changing landscape of collegiate athletics and keep Villanova in a position of strength — now and in the future,” Jackson said. “After meeting with several exceptional candidates, we found all those attributes and more in Kyle Neptune. Kyle quickly stood out for his basketball knowledge, recruiting savvy and natural ability to connect with student-athletes and coaches.”

The news of Wright’s retirement sent shock waves through the college basketball world, where Wright is among the most respected coaches. With the recent retirement of Mike Krzyzewski, Wright was one of just three active coaches to have won multiple national titles. (Bill Self and Rick Pitino are the others.)

“It’s a tremendous loss for college basketball,” Syracuse coach Jim Boeheim told ESPN, adding that Wright “absolutely” is one of the best coaches of the modern era.

Boeheim was among the many coaches contacted by ESPN who were stunned by the news. Notre Dame coach Mike Brey also said he was surprised.

“He has really achieved it all and done it all with class,” Brey told ESPN. “It’s a big loss for the college game.”

Wright is the third coach with multiple national titles to retire in essentially the past year, joining Duke’s Mike Krzyzewski and North Carolina’s Roy Williams. That marks three of the game’s most recognizable faces, consistent winners and important voices leaving the sideline.

“Coach Krzyzewski, Coach Williams and Coach Wright are huge losses for college basketball in just over a year,” NCAA senior vice president of basketball Dan Gavitt told ESPN. “Yet like the legends they learned from and followed — Bob Knight, Dean Smith and Rollie Massimino — the next generation of coaches will rise to the challenge of advancing our great game.”

Wright’s wins, titles and accomplishments speak for themselves. But the theme going through the sport on Wednesday was the way that Wright handled himself.

Former Villanova player and assistant coach Baker Dunleavy echoed that notion, saying that Wright’s legacy and work at Villanova will reverberate through all the players and coaches he worked with.

“Coach Wright’s true legacy will not be his championships,” said Dunleavy, now the head coach at Quinnipiac University. “His legacy is the set of values he has instilled in his coaches and players. Those are obvious watching a Villanova game — and more importantly meeting a Villanova player. To him that is the most significant mark he could leave. We are all proud to be associated with him.”

Before taking over at Villanova, Wright was the head coach at Hofstra for seven seasons, winning two America East championships and making two NCAA tournament appearances.

ESPN’s Pete Thamel and Adrian Wojnarowski contributed to this report.