Vin Scully was the voice of the Dodgers, baseball and the nation 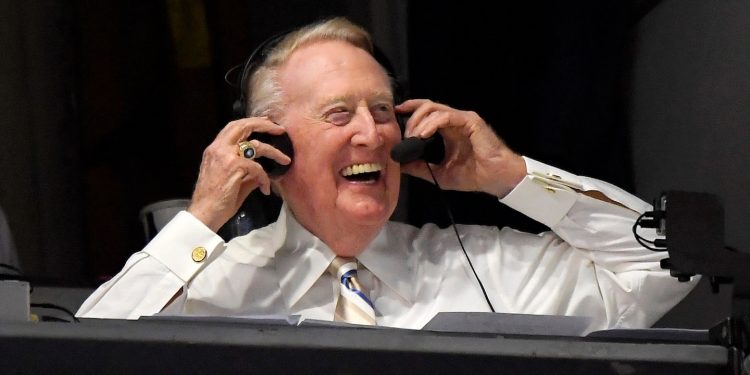 He was something that’s pretty much vanished from the American landscape: a genial truth-teller, well-liked because he was honest, beloved because he was reliable, trusted because he loathed phonies, frauds and showboats as much as his audience did.

Vin Scully’s act never fell out of fashion because it wasn’t an act and it was never in fashion. What he delivered each night through six decades as the voice of the Dodgers — really, the voice of baseball; no, really, the voice of the nation — was a clear, unvarnished report of what happened, along with plain-spoken pearls of wisdom about what it all meant. He issued each night a fanfare for the common man, an American anthem of constancy that never flinched from controversy but never hyped anything either. His nightly love song to his sport and his audience captured the nation’s triumphs and tensions as Aaron Copland’s music did, told the truth as Walter Cronkite did, burst bubbles of pomposity the way Johnny Carson did, and won our hearts the way the pre-scandal Bill Cosby did.

For Scully, who died Tuesday at 94, there was never any fall from grace, never any fade-out into some new technology. He was as loved during his last ballgame as he had been throughout. “I have said enough for a lifetime,” he said on that final broadcast in 2016, “and for the last time, I wish you all a very pleasant good afternoon.” He never trumpeted his achievements, never hyped the action on the field.

Vin Scully, a Babe Ruth of the broadcast booth, dies at 94

Yet he had an uncanny ability to see big stuff coming. His call of Kirk Gibson’s World Series home run in 1988 is justly famous (“The impossible has happened …”), but it’s what he said before the physically wrecked slugger’s mighty swing that reveals Scully’s magical connection with the game’s big moments:

“All year long, they looked to him to light the fire, and all year long, he answered the demands until he was physically unable to start tonight,” Scully said. And then it happened, and Scully said only what was necessary: “High flyball into right field. She is gone.”

Baseball, famously dubbed the only game you can see on the radio, was Scully’s canvas, a game whose leisurely pace and bursts of intense action allow the best storytellers to insinuate themselves into listeners’ lives, night after night, summer after summer.

For 67 summers, owners and all-stars and journeymen drifted by, and Scully stayed. His voice was SoCal smooth, unhurried, gentle, with a touch of his native New York. He wrote poetry in the moment. His language was simple, occasionally erudite — he never dumbed it down. If the best description of a play had been coined centuries earlier by Shakespeare or a Greek tragedian, Scully would not shy from quoting the master.

But in the big moments, Scully trusted his own words. This was no Neil Armstrong delivering a well-honed line as he stepped into a new world; this was pure improvisation, a jazz man working the changes in the pocket.

When Sandy Koufax, the Dodgers pitcher who inspired some of Scully’s best work, began the ninth inning of his perfect game in 1965, the announcer paused between pitches to name all nine Dodgers on the field, the men Koufax would depend on to ensure his perfection.

“You can almost taste the pressure now,” he said. “There are 29,000 people in the ballpark and a million butterflies.”

And then, after it was over, after he let the crowd’s roar be its own commentary for the longest time, Scully placed the event in history: “On the scoreboard in right field, it is 9:46 p.m. in the city of the angels, Los Angeles, California. And a crowd of 29,139 just sitting in to see the only pitcher in baseball history to hurl four no-hit, no-run games. He has done it four straight years, and now he capped it: On his fourth no-hitter, he made it a perfect game.”

Scully worked TV for decades — football and golf on CBS in the ’70s and ’80s, then NBC’s baseball game of the week — but the Dodgers were his constant, and radio was his enduring love, his intimate connection with the family in the car, the kid with the transistor radio tucked under his pillow in bed, the people hanging out on the stoop, the Dodgers fans in their seats. Radio, he knew, was vastly more intimate than TV; it was where he and the fans could imagine together, Scully painting aural pictures and listeners filling in the colors in their minds.

Scully always left space for that to happen. He endured in good part because of what he did not do: He did not rip the bad guys on the other team. He did not spew gossip. He was no homer — he loved the Dodgers, to be sure, but he was not one of those announcers the team owners love, who find the silver lining in every lousy turn of the home team’s fortunes. Vin Scully told the truth, with empathy, but unvarnished. He never made fans groan.

In his later decades, when he was already a legend, he could at times seem anachronistic. He insisted on working games alone — no jocular jock sidekick, no bantering crosstalk. He made listeners — he addressed them as “Friends” — an honest deal: No blather, no phony yuks, just the straight story, with the lessons of history, the wisdom of someone who had seen it all. When Scully said a young phenom’s swing was reminiscent of Hank Aaron’s, it had nothing to do with anything he had read or viewed on YouTube: It was because Scully saw them both play and had taken careful note of the alignment.

Scully never put his own views out front, but neither did he shy from making clear what he believed. In 1976, at Dodger Stadium, two protesters ran onto the field to set an American flag ablaze, but Cubs outfielder Rick Monday had another idea: “It looks like he’s going to burn a flag,” Scully said, “and Rick Monday runs and takes it away from him. And so Monday — I think the guy was going to set fire to the American flag. Can you imagine that? Monday, when he realized what he was going to do, raced over and took the flag away from him. And Rick will get an ovation and properly so.”

On his final broadcast, Scully told his audience: “You and I have been friends for a long time. But I know in my heart that I’ve always needed you more than you’ve ever needed me.” He left them with a prayer, that “God give you for every storm, a rainbow. For every tear, a smile. For every care, a promise and a blessing in each trial. For every problem life sends, a faithful friend to share.”

Most likely, no latter-day Scully could get hired anymore. Team owners want a PR man more than a storyteller. When Baltimore Orioles owner Peter Angelos sacked the great announcer Jon Miller — a deacon in the Church of Scully — in 1996, he said it was because he wanted “more of an advocate” for the home team.

What the owners and the money men don’t get is that Scully was rich beyond words in the currency they would never understand, the most vital currency of all — trust. He declined to pretend he was just another fan. He valued only his credibility. And fans sensed it, sensed that he represented what we really do have in common. Vin Scully united people, maybe not to fight the big battles, for freedom or democracy, but to be together for the small things. He only told stories about a game, yet he reminded us always of who we are and what we want to be.

Opinion: Why Disney+ and Hulu are all you need to stream in August 2022 (sorry, dragons)

Opinion: Why Disney+ and Hulu are all you need to stream in August 2022 (sorry, dragons)