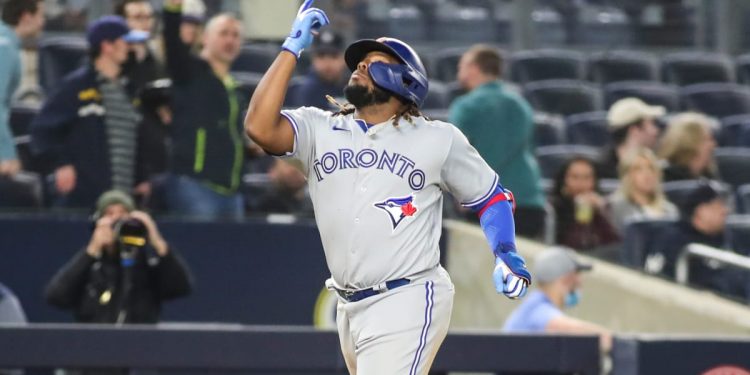 Few pitchers could handle Blue Jays star Vladimir Guerrero Jr. in what was a breakout 2021 campaign. Less than a week into the 2022 season, Guerrero has picked up right where he left off—especially on Wednesday night at Yankee Stadium.

Guerrero went 4-for-4 with three home runs and a double during Toronto’s 6-4 win over the Yankees. Two of those homers were hit off of ace Gerrit Cole, one of which came after Guerrero got his hand stepped on at first base.

Each home run went farther than the last. His first-inning blast traveled 416 feet to dead center field, while the second was measured at 427 feet, per Statcast. Each had exit velocities of 109.1 miles per hour. Guerrero’s third dinger of the night clocked in at 114.4 mph off the bat, traveling 443 feet to the second deck in left field.

Even Guerrero’s Hall of Famer father couldn’t help but be impressed.

Guerrero led all of baseball last season with 48 home runs, 123 runs scored and 363 total bases, and topped the American League in on-base percentage (.401) and slugging percentage (.601). He made his first career All-Star team, won his first Silver Slugger award and finished second in MVP voting to two-way phenom Shohei Ohtani.

More MLB Coverage:
• The Legend of Juan Soto: Inside the Mind of MLB’s Best Hitter
• The Yankees Can’t Replace Aaron Judge. That’s Why He Rejected Them.
• More Radical Changes Are Coming to MLB
• Braves Sacrifice World Series Odds to Dominate the Decade
• Remember Mike Trout? MLB’s Best Player Is Back With More to Prove