Voter registrations jump ahead of May elections 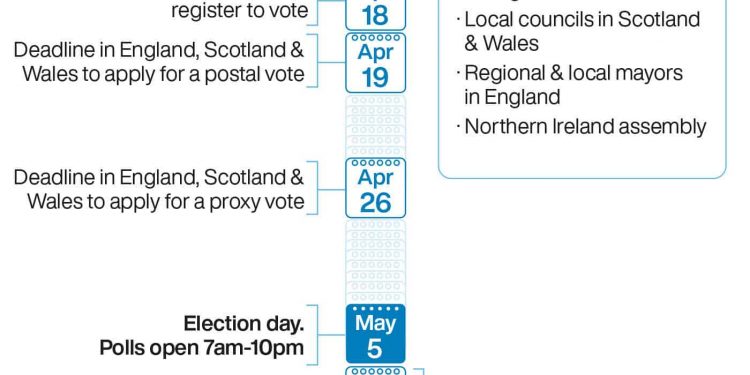 
Applications to vote in elections taking place across the UK next month have jumped ahead of Thursday’s deadline.

Contests are taking place on May 5 in each of the four nations, with every council seat in Scotland, Wales, London and many parts of England up for grabs, along with the election of a new Northern Ireland assembly.

But people who have not yet registered to vote, or are not sure if they are eligible, have not long to apply.

In England, Wales and Northern Ireland the deadline to register is 11.59pm on April 14.

For people in Scotland the deadline is April 18.

A total of 28,273 applications were made on Tuesday, Government figures show.

This is double the daily average for the year so far and the highest for a single day since last autumn.

The figure is likely to rise as the cut-off gets closer.

How to register to vote

Craig Westwood, director of communications at the Electoral Commission, told the PA news agency: “There is only a matter of hours left to register to vote ahead of the May elections.

“If you want to make sure your voice is heard and you’re not already registered, it’s really important that you go online and register now at www.gov.uk/registertovote.

“It only takes five minutes – so the next time you are waiting for the kettle to boil you can register to vote. All you need is your name, date of birth and national insurance number.”

What seats are up for grabs?

Most of the seats up for election on May 5 were last contested in 2018, when the UK was still in the European Union, the prime minister was Theresa May, Labour was led by Jeremy Corbyn and the Liberal Democrat leader was Vince Cable.

The political landscape of the UK has undergone huge changes in the past four years.

Yet many of the issues that can decide local elections remain the same, such as when bins are collected, the state of neighbourhood parks and pavements, and access to libraries and hospitals.

This year’s elections are also likely to be a verdict on the main party leaders and their handling of such national issues as the cost of living and Covid-19.

It will be the first big electoral test for Prime Minister Boris Johnson since the “partygate” scandal.

Labour leader Sir Keir Starmer and Lib Dem leader Sir Ed Davey will be judged on whether their parties are able to make gains at the expense of the Conservatives.

In Scotland and Wales, the SNP and Plaid Cymru will want to hold their ground in the face of challenges from other parties.

And across the country, smaller groups such as the Greens, residents’ associations and independents will hope to cause surprises and upsets.

On Thursday May 5, elections will take place for:

– Every local authority in Scotland, Wales and London
– South Yorkshire’s regional mayor plus the borough councils of Barnsley and Sheffield
– 60 district councils, 31 Metropolitan boroughs and 19 unitary authorities across the rest of England
– County councils in North Yorkshire and Somerset
– All 90 seats in the Northern Ireland assembly
– Local mayors in Croydon, Hackney, Lewisham, Newham, Tower Hamlets and Watford

There is also a referendum in Bristol on whether to keep or abolish the city’s elected mayor.

Here are the key dates in the countdown to polling day on May 5:

How College Athletes Are Getting Paid From NIL Endorsement Deals

Good luck: could Jupiter and Neptune give us months of wealth and good fortune? Just ask an astrologer | Health & wellbeing

Good luck: could Jupiter and Neptune give us months of wealth and good fortune? Just ask an astrologer | Health & wellbeing