Vowel play! Standard Life Aberdeen mocked as it drops ‘e’ to be Abrdn

The asset manager, which invests more than £500billion on behalf of savers, governments and insurers, announced it was to be called Abrdn.

For the avoidance of doubt, the firm pointed out that its new moniker would still be pronounced ‘Aberdeen’. 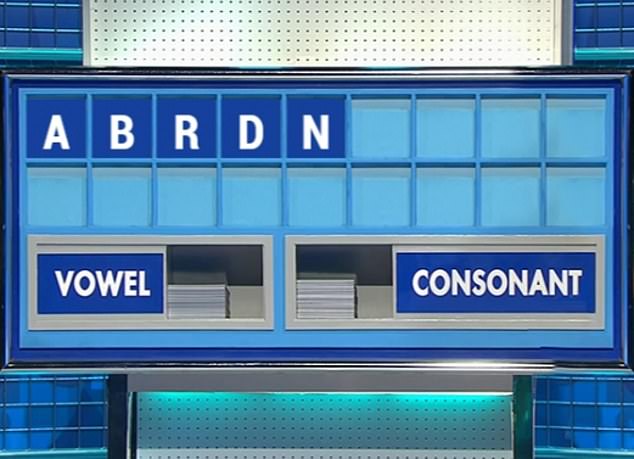 Name games: Twitter users likened Standard Life Aberdeen’s new moniker Abrdn to a game of Countdown where the player had asked for just one vowel and a string of consonants

But the decision to drop the use of the letter ‘e’ set tongues wagging.

‘Standard Life Aberdeen is a bit of a mouthful, but Abrdn is an abomination of an alternative,’ said City veteran David Buik, a consultant at stock exchange Aquis. ‘Get back to your creative designers and start again, please.’

The move drew comparisons with the Post Office’s short-lived rebranding to Consignia and the ill-fated attempt by accountant PwC to rename its consulting business Monday.

Twitter users likened Abrdn to a game of Countdown where the player had asked for just one vowel and a string of consonants.

And an early take from the Financial Times website quipped that the company had been ‘disemvoweled’. 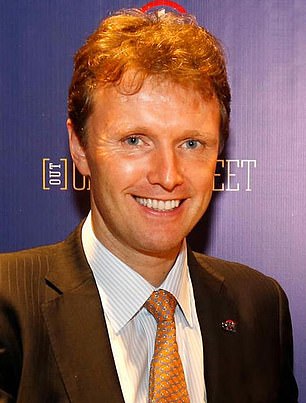 A former Citigroup banker who took the reins at SLA last year, he went on to explain that the new ‘a’ logo formed of rows of tiny dots was designed to resemble the transition from an abacus to fibre optic cables.

In a statement filled with corporate gobbledygook, he said: ‘Our new brand Abrdn builds on our heritage and is modern, dynamic and, most importantly, engaging for all of our client and customer channels.

‘It is a highly-differentiated brand that will create unity across the business, replacing five different brand names that have each been operating independently.’

Martin Gilbert, who co-founded Aberdeen Asset Management in 1983 and led the business until its 2017 merger with Standard Life, offered his support to the revamp.

He said: ‘I’m delighted the new name retains some of the heritage of the business and its Aberdeen roots, which are well-known around the world.

‘This is the right time to create a modern brand that is as resonant and relevant to the 21st century as its predecessors were in the 20th.’

SLA is just the latest in a string of companies to run into trouble with a name change.

In 2002, accountancy firm PwC roped in branding experts from Wolff Olins – the same firm which has come up with the Abrdn moniker – to advise on the demerger of its consulting arm.

After paying an estimated £75million for Wolff Olins’ services, the result was Monday. But the name was ridiculed by employees and ditched weeks later.

Just a few months earlier, the Post Office attempted to replace its historic title with the name Consignia.

In an explanation which made the mind boggle, chief executive John Roberts said Consignia described ‘the full scope of what the Post Office does in a way that the words ‘post’ and ‘office’ cannot’. The name lasted just over a year before it was consigned to history.

More recently, events and media company Reed Elsevier changed its name to Relx, and Reckitt Benckiser switched to RB and then Reckitt.

Weight Watchers, meanwhile, is now known as WW, but still has to spell out its former name on its website. The new ‘shorter’ name is also more of a mouthful, having twice as many syllables.

But SLA will be hoping its Abrdn rebranding exercise will put a stop to years of outflows from its funds.

It follows the merger of Standard Life and Aberdeen Asset Management in 2017. Since the deal, it had been operating under a mish-mash of closely related names.

The umbrella company listed on the stock market was known as Standard Life Aberdeen, while the asset management arm operated under the banner of Aberdeen Standard Investments, causing confusion for some customers.

And this year, the Standard Life brand was sold to insurance group Phoenix as part of a ten-year partnership between the companies, necessitating a further change.

But the chosen name has raised eyebrows.

‘The fact Standard Life Aberdeen has actually had to explain how to pronounce the new name won’t be lost on financial advisers up and down the country, whose clients might well think they’ve punched a typo into a hastily written report.’

See what's streaming in May

Dogecoin prices surge 40% higher but here’s one sign the crypto is headed for a lasting breakout, analysts say

A Picture Is Worth A Thousand Words