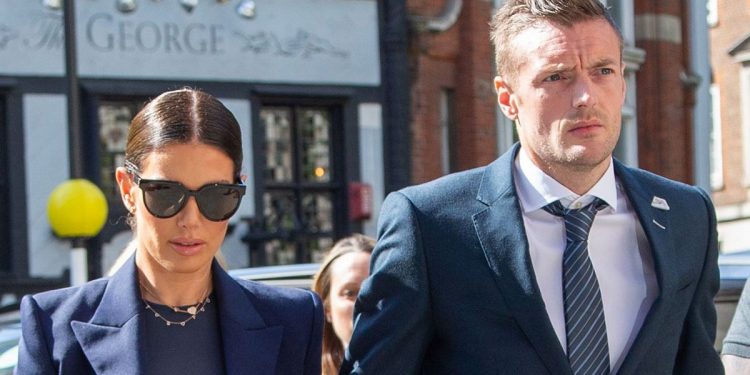 
The Wagatha Christie case between Coleen Rooney and Rebekah Vardy is as explosive as fans may well have anticipated – with shock details about the personal lives of all those involved in the case leaking out in court.

Fans of both ladies have been treated to the juiciest details of their private lives as a result of the explosive, multimillion pound High Court case in London.

And as a result, a string of shocking WhatsApp and text message exchanges have been read out in court – making them readable to the world.

It’s not just the Vardy’s and the Rooney’s who have seen their names called out in court – as fellow WAGs have also been inadvertently dragged into the case.

Court documents submitted to the High Court have also included messages from Danielle Lloyd – who used to be married to footballer Jamie O’Hara – and Real Housewives of Cheshire star Magali Gorre.

The ladies found themselves being quoted in the case as the fall out of Coleen’s initial “………it’s Rebekah Vardy’s account” post sent shockwaves through the celebrity world.

After seeing the message, loyal Danielle responded to Coleen to declare of Rebekah: “She is rat feel ashamed for her (sick emoji)”.

While Magali added: “What will her husband and family see her now – it’s it’s it’s shocking to me.

“How you find (sic) out was perfect (ok emoji) still painful (angry emoji) to find this out.”

Coleen Rooney grew suspicious someone close to her was selling stories about her by using information shared via her private Instagram account.

While the mum-of-four has a public Instagram page which is followed by 924,000 fans, she also has a private one that has just 300 followers – with those closest to her and those she trust allowed access to follow her.

She uploaded a snap of her damaged car to her account – and soon after reports emerged that she had been involved in a car accident.

In another post, she shared a photo of a seat on an airplane along with a caption reading: “Let’s go and see what this gender selection is all about” alongside a string of pink heart emojis and a grimacing face emoji.

After this message was shared, reports emerged that Coleen was flying to North America to investigate the possibility of using IVF and gender selection in order to give birth to a girl.

And she also shared another post where she claimed her house had flooded – uploading a snap of a bottle of wine and the caption: “Needed after today… flood int eh basement of our new house… when it all seemed to be going so well” along with a wailing face emoji.

Reports soon followed suggesting Coleen’s house had indeed flooded, but she admitted it was a ruse to catch out whoever was selling stories about her.

The court heard that journalists had tired to corroborate Coleen’s fake stories.

The court Coleen explain that the newspaper contacted her publicist asking her for a comment about the gender selection story prior to publication – and that Coleen told the publicist to pretend she could not get hold of her.

She told the court: “I wanted the story to run so I had the evidence. It was my story that only one account had seen and then I would have the story in the newspaper.”

Asking for clarity, Hugh Tomlinson QC, questioning Coleen, asked why she did not tell the newspaper it was untrue, and Coleen told the court: “No. I wanted it to run.”

She then explained that she ran her sting again to see if the same thing happened.

QC Tomlinson said she had run a “serious and concerted operation” – prompting Coleen to state: “I didn’t believe it was at the time.

“It wasn’t hard. Anyone can do it. I feel that it has been made bigger than what it was. But it worked for me and I found out which account was doing it.”

Hitting out about Coleen

It was back in October 2019 that Coleen Rooney stunned the world with her accusation that Rebekah Vardy had been taking information from her private Instagram account and selling the information to a newspaper.

Rebekah has always furiously and politely denied the accusations made against her.

One explosive WhatsApp message read out in court allegedly sent by Rebekah stated: “All I’ve ever been is nice to her though! Even when Wayne was being a c**t.”

It was also alleged in the High Court that Mrs Vardy said of fellow WAG Coleen: “that c**t needs to get over herself” and in another called her a “nasty b****h”.

However, Rebekah’s barrister denied the “nasty b***h” comment was about Mrs Rooney.

The court then heard that Caroline then messaged Rebekah what she should say to Coleen – advising that she tell her she was “heavily pregnant”, she should have come to her first and she was “disgusted that I’m having to deny this’”

Reacting to the messages being relayed in court, Rebekah said while on the stand last Friday: “I think she was just trying to be protective. It was such a blur that day.”

Reading midfielder Danny Drinkwater made headlines in April 2019 when he was charged with drink-driving following a smash involving his Range Rover and a solid brick wall in Mere, Cheshire.

Text messages between Rebekah and Caroline were read out in court that suggested the WAG was trying to sell details about the incident.

The court head about a message that Rebekah sent stating: “Story…..Danny Drinkwater arrested.”

Caroline Watt then messaged back: “For what?”

Becky then wrote: “Crashed his car drunk with 2 girls in it. Both in hospital with 2 broken ribs. He has been only just let out of the cells. I want paying for this.”

Coleen Rooney’s barrister David Sherborne QC then asked Rebekah if she meant she wanted payment for leaking the story.

However, Becky replied: “It was a fleeting thought and I did not consider it any more after I wrote it.

“It was a fleeting, a fleeting comment, and something I probably considered at the time. And that was it.”

She went on to admit: “It was something terrible. I’m deeply affected by drink driving. My ex-husband killed two people during our marriage.

“I didn’t care if the information came out.”

The court then heard that Caroline later messaged Rebekah saying someone had already tipped off the newspaper from the police station – prompting Rebekah to then message back: “F***.”

QC Sherborne then asked if Rebekah’s response meant she knew she would not now get paid for the information.

Rebekah then told the court said she was not “angry” about missing out on the money but was “shocked” the newspaper already knew about it.

QC Sherborne then asked why Rebekah then messaged Caroline saying: “I’m fuming I didn’t give it to you earlier.”

Caroline replied: “Me too. That would have been a fortune” – a comment Rebekah insisted was simply demonstrative of “Caroline’s sense of humour”.

Rebekah has been supported by her footballer husband, Jamie Vardy, during the ongoing trial – and some messages sent by him have also ended up being read out in court.

During questioning last Friday, questions were raised about Rebekah’s relationship with journalists and her friendships with other WAGs.

It was suggested one image she shared online following a match in Russia had upset other wives and girlfriends of footballers – however, Rebekah denied this and noted that Harry Maguire’s fiancee Fern Hawkins had shared similar snaps herself.

It was suggested that England football team captain Wayne had encouraged his teammates to instruct their wives and girlfriends to scale back their social media content.

In a WhatsApp exchange about it between Rebekah and Jamie, the footballer described the claim as: “a load of b*******” and said no-one had said anything to him about it.