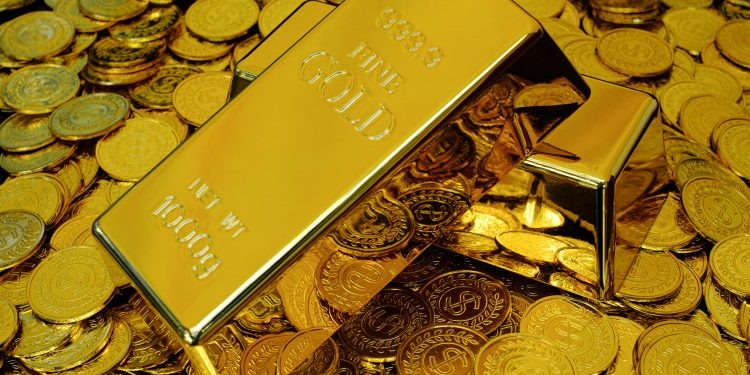 
The calm of the last 3 weeks has resulted in a risk-on environment. This, in turn, has led to a nice recovery rally in stocks. For the time being, volatility has subsided. However, we believe there are many underlying market risks that can still resurface without any warning.

Gold’s rally over the past 12 months failed to break through its $2080 price level. After retreating back to $200, gold seems to have found support at the $1900 level.

In reviewing the following spot gold chart, it appears we have broken out of an accumulation phase and seem to be preparing to move above the $2080 high.

Utilizing the (www.tradingview.com) Fibonacci projection tool, we see that the GLD price accumulation from July 2016 through August 2018 resulted in a 2-year rally and a profit of $82 or an approximate gain of +73%.

GLD now appears to have broken out of its accumulation phase and seems to be preparing to trade above the $194 high.

Newmont’s bull market started back in September 2015. During the past 6-years, Newmont’s stock price has experienced several strong rallies that ranged from +$30 to +$40 each. Newmont’s recent price level is now four times greater than the low it made in 2016.

Utilizing the same Fibonacci tool, but this time measuring from the $15 lows to the $30 lows, we learn that Newmont had a strong reaction down after reaching the key $75 level.

However, this reaction found buying support at the Fibonacci 2.618 level of $52.67. Newmont has since rallied by $30, which has allowed its price to blow through its previous $75 top resistance level.

Newmont may be showing us that the gold spot and the GLD ETF will both make new highs.

Knowledge, Wisdom, And Application Are Needed

It is important to understand that we are not saying the market has topped and is headed lower. This article is to shed light on some interesting analyses of which you should be aware. As technical traders, we follow price only, and when a new trend has been confirmed, we will change our positions accordingly.

Sean Penn does the talkshow rounds to advocate support of Ukraine

Sean Penn does the talkshow rounds to advocate support of Ukraine