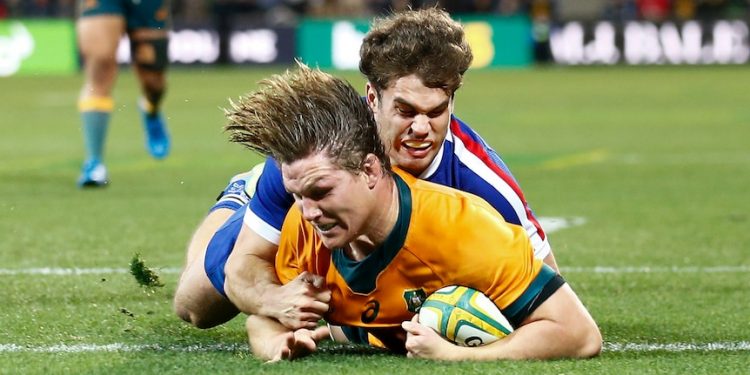 
John Eales has lauded Michael Hooper as one of rugby’s most consistent talents after the Wallabies captain won the prize — named in honour of the former Australian captain — for a record fourth time.

Hooper was awarded his second consecutive John Eales Medal on Sunday, an obvious choice for the player-voted award after a tireless campaign that also saw him nominated for world player of the year.

The victory pushes him clear of three-time winner Israel Folau and confirms his status in the game in the same season he went past George Gregan as Australia’s most-capped skipper.

“Michael is an incredible pillar of consistency in the Wallabies team,” Eales said.

“His performances as a captain and as a player, week in week out, season in season out, set the perfect example for his team.

“In the history of rugby, there haven’t been many players as consistent as Michael Hooper.

“His influence on this Wallabies team, and [on] rugby in Australia, has been profound, so he’s an easy guy for Wallabies supporters and former players to feel proud of.”

The Wallabies endured a tough start to their year in a Bledisloe Cup hiding but found form in the Rugby Championship against world No.1 South Africa, stringing five wins together for the first time since 2015.

Hooper played almost every minute of the season, only brought down by a foot injury that ruled him out of the final Test of the Spring Tour.

The injury will sideline Hooper for the start of the Super Rugby Pacific season later this month.

“It’s extremely humbling to be awarded the John Eales Medal in a year where there were so many stand-out performances across the squad,” the 118-Test veteran said.

“Players certainly don’t play the game for individual awards but there’s no doubt it’s special to be recognised by your teammates in this way.

“As a group, we made some good strides last year but there’s still plenty to improve on and I’m looking forward to doing that with the Waratahs and the Wallabies this season.”