Wallin out to shock Fury, put Sweden back on boxing map 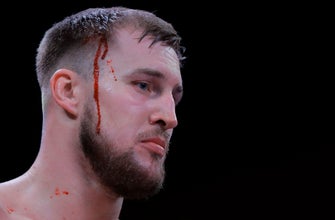 SUNDSVALL, Sweden (AP) — The pretty Swedish coastal city of Sundsvall has had a couple of quirky brushes with elite heavyweight boxing over the years.

In 1965, heavyweight champion Muhammad Ali stunned the locals by visiting a newly opened boxing club as part of his promotional tour of the country. Ten years later, former champion Floyd Patterson chose Sundsvall to open the first of his five burger restaurants in Sweden.

A generation later, one of Sundsvall’s own is hoping to write a new chapter in the city’s unlikely relationship with boxing’s marquee division.

Otto Wallin will take his first step into the big time when he fights Tyson Fury in Las Vegas on Saturday. No world title is on the line but Fury is unbeaten, the lineal champion — he lost his belts out of the ring while battling substance abuse and depression — and represents arguably the biggest scalp of all the available heavyweights.

For Sweden, it could be the biggest moment in heavyweight boxing since Ingemar Johansson became its first and only Nordic world champion by beating Patterson in 1959.

“It would be at the same level,” Wallin told The Associated Press. “I think Fury is the top guy, if he has a world title or not.”

Fury is a big favorite among bookmakers, a nod to Wallin’s low-key career spent predominantly fighting in Europe, if not to the 28-year-old Swede’s 20-0 record that includes 13 knockouts.

Humble and reserved — characteristics often associated with the Swedes — Wallin recently based himself in New York in an attempt to make a name for himself in the United States. It has gotten off to a frustrating start.

A fight with Nick Kisner in Atlantic City in April was declared a no contest after an accidental clash of heads in the first round, before a July fight against BJ Flores in Tacoma, Washington, was cancelled when Flores wasn’t medically cleared to compete.

Now he is heading to Vegas for the first time in his life — as a boxer or on a personal trip — to be Fury’s final opponent before the Briton’s rematch against WBC champion Deontay Wilder in early 2020.

Unless Wallin ruins those plans, that is.

For Wallin, a 6-foot-5 southpaw, this marks the culmination of a journey that began when he was a skinny teenager in Sundsvall and his father, Carl, showed him some boxing moves for fun in their kitchen. The elder Wallin was an amateur boxer-turned-trainer who stayed up as a 9-year-old to listen on the radio to Johansson beating Patterson and had photos at home of Ali’s random visit to Sundsvall.

Carl would become the boxing mentor of the youngest of his three sons, ingraining strong technical traits in Otto from an early age and seeing him rise up the Swedish boxing ranks quickly after Otto began taking the sport seriously from the age of 16.

They used to talk about going to Vegas together one day, and Otto winning the world heavyweight title there. Carl will never get to see that happen because he died in May after a sudden heart attack.

“It just sucks that he can’t be here,” Wallin said in a phone interview. “But it almost feels like he hasn’t left in some ways. I pretty much know what he would be saying to me and what kind of advice he would give to me.

Swedish boxers are typically good technicians, maybe because they are judged in youth “diplomboxning” (diploma boxing) competitions on aspects like defense, balance and footwork as well as punches made.

Fredrik Stridh was there when Otto Wallin first came to Sundsvall’s boxing club, and could tell right away he would be a “sensation.”

“You could see he had trained with his dad before,” said Stridh, who is now a boxing trainer. “He is really technical for a heavyweight. He has a good amount of speed, fast feet.”

Stridh said Wallin sometimes turns up at the club.

“He comes with tips for the beginners and sometimes helps with training,” Stridh said. “I see the young guys and girls really looking up to him in the gym.”

Walllin’s popularity will soar further and wider if he beats Fury.

He is taking inspiration from Andy Ruiz Jr. beating Anthony Joshua to become WBO, WBA and IBF champion in June in one of the biggest shocks in heavyweight history. His sparring sessions with Joshua and other leading heavyweights like Kubrat Pulev and Jarrell “Big Baby” Miller have made him feel more comfortable alongside the elite fighters.

He is confident, too, of suppressing Fury, a showman but also an excellent technical boxer himself.

“I can’t let him get to my head,” Wallin said of Fury. “When he starts getting comfortable, talking to me, knocking me out of my game plan … I think I am well prepared for that. I know what he is about. I have been following him for years.”

The heavyweight division has been in flux ever since Fury beat Wladimir Klitschko in 2016 in an upset almost as shocking as the one inflicted by Ruiz Jr. this year.

Fueled by the memory of his father, Wallin is sure he can cause other.