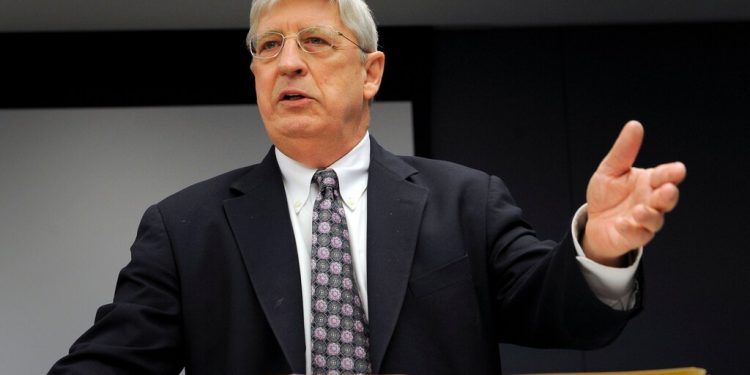 The cause was complications from pulmonary fibrosis, said his son, Hampton Dellinger.

The son of a widowed store clerk, Mr. Dellinger grew up in modest circumstances in North Carolina, far from the courthouses and judicial chambers, law schools and legal offices where he became a revered figure by the end of his career.

He hitchhiked to his interview for admission to Yale Law School in 1963 — arriving late for the appointment after a trip that lasted several days — and won a spot in the incoming class after telling the committee of the journey that had brought him there.

He became a professor for nearly 25 years at Duke University law school and a partner at the white-shoe firm of O’Melveny & Myers, in addition to his posts in the Clinton administration. As acting solicitor general and as a lawyer in private practice, he argued 24 cases before the U.S. Supreme Court, where he was at times floated as a contender for vacancies on the bench.

“Walter was a great mentor and friend to me,” Supreme Court Justice Elena Kagan said in a statement, recalling his “his passionate engagement with the world of law.”

“He gave the best advice when I became Solicitor General [under President Barack Obama]sharing everything he knew about the job,” she continued. “He was a phenomenal lawyer with an endless string of accomplishments, but he always gave the credit to others.”

In academia, government and private practice, Mr. Dellinger earned a reputation as a formidable advocate for his clients and causes. “He was a brilliant constitutional lawyer and scholar,” Marin K. Levy, a professor at Duke University law school who specializes in federal courts, said in an interview. “He could just see all the pieces on the board really like no other, and he used that to great effect in the classroom and of course before the Supreme Court.”

After Clinton’s election in 1992, Mr. Dellinger worked with the transition team on the selection and confirmation of Justice Department officials including Janet Reno, the first woman to serve as attorney general.

In 1993, Clinton nominated Mr. Dellinger as head of the Office of Legal Counsel, where he would advise the president and executive branch agencies in a role sometimes referred to as the “attorney general’s lawyer.” In winning confirmation, Mr. Dellinger overcame the opposition of his two home-state Republican senators, Jesse Helms and Lauch Faircloth, who briefly filibustered his nomination.

Helms accused Mr. Dellinger of being “less than candid” about his role in stopping the elevation of conservative jurist Robert H. Bork to the Supreme Court in 1987. Dellinger had testified publicly against the Reagan nominee but was also said to have helped organize a backstage effort to block his path to confirmation. Helms denounced Mr. Dellinger as a “liberal political activist who has slammed in the gut, time and time again, decent, brilliant Americans with whom he disagrees, while he sits in an academic ivory tower.”

Mr. Dellinger detected another reason for the animosity toward him from the arch-conservative. Helms, Mr. Dellinger once told a friend, “hates the fact that a staunch liberal like me could have been produced by the same world that produced him,” a reference to the old order of the South.

At the Office of Legal Counsel, Mr. Dellinger advised Clinton on matters ranging from the balanced-budget amendment to affirmative action to prayer in public schools to presidential war powers.

“His unique contribution to the Office of Legal Counsel — and really to the Department of Justice and the White House — was his ability to really understand what the White House, policy-wise, was trying to achieve and a very deep understanding of what federal law did or did not allow,” Seth Waxman, who worked in Clinton’s Justice Department and succeeded Mr. Dellinger as solicitor general, said in an interview, observing that Mr. Dellinger managed some of the thornier legal questions “like a maestro.”

“I can’t think of a single instance,” Waxman reflected, “in which either Walter’s staff or the attorney general or the president thought that the advice that Walter in his office was giving was not spot-on and entirely reasonable and helpful.”

He won cases involving physician-assisted suicide, a practice that Clinton opposed, and the line-item veto, which the president sought to exercise. He lost a case that resulted in a weakening of the Brady gun-control bill and failed to persuade the court in Clinton v. Jones that the president should be entitled to immunity from the civil litigation filed by Paula Jones, who had accused Clinton of sexual harassment when he was Arkansas governor.

In his private practice, Mr. Dellinger represented clients including ExxonMobil in the Exxon Valdez oil spill off the coast of Alaska in 1989 and decor doyenne Martha Stewart in her appeal of her conviction in 2004 for lying to federal investigations amid an insider trading probe.

He was said to have been especially proud of his role as the counsel of record for an amicus brief in the case Lawrence v. Texas, in which the U.S. Supreme Court considered a Texas ban on homosexual sex.

“By now, all but the obtuse and the unkind recognize that persons who are physically and emotionally attracted to members of the same sex are not less productive — or more dangerous — members of the community by mere dint of their sexual orientation,” the brief read. “Any suggestion that sodomy laws are rational because gay people should be branded as criminals is indefensible.”

Among the people “branded as criminals by laws like Texas’ Homosexual Conduct Law,” the brief noted, was “Mark Bingham, who on September 11, 2001, called his mother from United Airlines Flight 93 and then helped to save countless American lives by fighting against the terrorists aboard his plane. To his country, Mr. Bingham is a hero; in Texas, he is a criminal.”

In a major victory for gay rights in the United States, the Supreme Court in 2003 struck down the Texas law as unconstitutional.

Walter Estes Dellinger III was born in Charlotte on May 15, 1941. After the early death of his father, he was raised principally by his mother, who worked in a men’s clothing store.

His experience as the son of a single mother, his son said, would inform his later legal work on behalf of gender equality and reproductive rights. Mr. Dellinger also was committed from an early age to racial equality and participated in the civil rights movement as an activist.

Mr. Dellinger received a bachelor’s degree in political science from the University of North Carolina at Chapel Hill in 1963 and three years later graduated from Yale Law School. He served as a law clerk to Supreme Court Justice Hugo L. Black before joining Duke law school in 1969.

Mr. Dellinger was married for more than five decades to the former Anne Maxwell, a legal scholar who specialized in public health law. She died in 2021.

Their son Hampton, of Washington and Durham, N.C., currently serves in the Justice Department as assistant attorney general for the Office of Legal Policy. Mr. Dellinger’s survivors include another son, Drew Dellinger of Mill Valley, Calif.; two sisters; three grandchildren; and a great-granddaughter.

Mr. Dellinger remained professionally active until the end of his life, serving on a legal team that prepared defenses against potential legal challenges to President Biden’s victory over Donald Trump in the 2020 election.

Mr. Dellinger served on a commission convened by Biden to analyze arguments for and against proposals among some progressives to increase the size of the Supreme Court. He wrote frequently for national publications, including as recently as earlier this month, commenting in an op-ed published in the New York Times about the merits of President Biden’s promise to nominate a Black woman to replace retiring Justice Stephen G. Breyer.

“Walter Dellinger was a great lawyer and a valuable public servant,” Breyer said in a statement. “He was thoughtful. imaginative, and had a very good sense of humor. His positive contribution to law and to the rule of law in this country will be long remembered.”