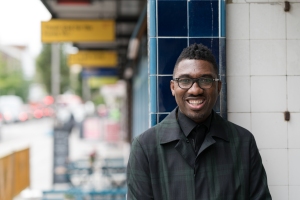 
EXCLUSIVE: Bohemian Rhapsody scribe Anthony McCarten has scripted his stage play The Collaboration into a feature that will mark the film directorial debut of Kwame Kwei-Armah, with Paul Bettany playing the artist Andy Warhol and Jeremy Pope playing Jean-Michel Basquiat. The film will go into production later this year with McCarten producing through his Muse of Fire Productions along with oft-producing partner Denis O’Sullivan.

Both actors will reprise roles they will soon play in the stage production of the play, also directed by Kwei-Armah,. The curtain rises February 23 at London’s Young Vic Theatre, where Kwei-Armah is Artistic Director.

The Collaboration explores the extraordinary creative partnership and friendship between the two artists in the 1980s, and how their contrasting beliefs became the propulsion for their work together. It is the second of what McCarten calls his ‘Worship Trilogy,’ works that explore the collective fascination with religion, art and money. The first leg of that was The Two Popes, the 2019 Netflix film that drew three Oscar noms, including one for McCarten’s screenplay. Third installment of the Worship Trilogy is Wednesday at Warren’s, Friday at Bill’s, the upcoming McCarten-scripted adaptation about the meetings between Warren Buffett and Bill Gates that led to the establishment of The Giving Pledge, which encourages extraordinarily wealthy people to give their fortunes to philanthropic causes.

“I’ve been a fan of both Warhol and Basquiat forever,” Bettany said. “I fell in love with their collaboration together when I saw it mounted at the Whitney in NY. I was hesitant to play Andy at first, as I believed it was too difficult to get out from underneath his carefully crafted public persona, but when I read Anthony’s play it felt like a revelation. The brilliant Kwame has been a dream to work with as has the ridiculously talented Jeremy Pope, who is luminous as Basquiat. I feel unbelievably honored to be involved with such extraordinarily talented people telling this important story of two of the greatest contemporary artists of all time.“ Bettany, most recently Emmy nominated for his work in the Marvel Disney+ series Wandavision, is repped by UTA and Affirmative Entertainment.

Pope received an Emmy Award nomination for his work in the Netflix series Hollywood, and drew two Tony noms in the same year (2019) for his work in Ain’t Too Proud and Choir Boy. He recently wrapped the lead role in A24’s The Inspection.

“We are only weeks into rehearsals,” Pope said, “but this has already been a dream collaboration. For me this one feels spiritually aligned like no other project I’ve been a part of. Working with this incredible group of artist and creatives. Finding Basquiat through his art and through Anthony’s words. It’s a gift.” Pope is  repped by WME, Door 24 and Jackoway Austen Tyerman.

“The thought of bringing to the stage and also the big screen this specific moment in the lives of these two icons, and with these wonderful actors, thrills me,” said Kwei-Armah, who co-wrote Spike Lee’s upcoming untitled musical about the accidental invention of Viagra. That one is for eOne, and he’s also got the feature Marked Man for Amazon and is currently writing The Saint reboot for Paramount. Kwei-Armah is repped by United Agents, CAA, Redefine Entertainment, and attorney Linda Lichter at Lichter, Grossman.

McCarten and O’Sullivan are currently in post-production on the Whitney Houston biopic I Wanna Dance with Somebody, starring BAFTA-winning actress Naomi Ackie and directed by Kasi Lemmons. The Sony Pictures film is also being produced by Pat Houston, Clive Davis and Larry Mestel.

McCarten’s scripts have been a magnet for acting accolades, with Eddie Redmayne winning for The Theory of Everything, Gary Oldman for Darkest Hour and Rami Malek for Bohemian Rhapsody, Anthony Hopkins and Jonathon Pryce both got Oscar noms for The Two Popes. McCarten is repped by CAA.

Observation of quantum transport at room temperature in a 2.8-nanometer CNT transistor