The chief executive of Warner Music has called into question the financial sense of some of the high-priced back catalogue acquisitions of recent months, after a string of deals for songs by the likes of Fleetwood Mac and Barry Manilow signalled a modern-day gold rush in music rights.

“Both in 1849 and later in the Yukon, more people went broke than they did make money,” said Steve Cooper, chief executive of Warner, the world’s third-largest music company.

“When you . . . pay north of a certain multiple, you’re beginning to move into the world of finance that lacks a certain amount of discipline,” he told the Financial Times. “I praise the people that can figure out how to make money when they pay 25 times [a song’s historic annual royalties]. God bless.”

A combination of low interest rates and the rise of streaming has spawned a scramble for music rights.

At the moment it’s a very favourable rate environment, and what we see is a lot of people moving money from traditional fixed income to . . . what they believe is fixed-income structure,

London-listed Hipgnosis has raised and spent £1.2bn on the rights to hit songs since it floated in 2018 and has been on a buying spree, having struck deals with Neil Young, Jimmy Iovine and Lindsey Buckingham already this year.

Hipgnosis has on average paid 14.76 times songs’ historic annual income to acquire some of the rights to hits by artists such as Barry Manilow, Fleetwood Mac and Bon Jovi.

But founder Merck Mercuriadis has said that for some catalogues he had paid a multiple as high as 22, prompting scorn from some music executives and industry analysts.

“At the moment it’s a very favourable rate environment, and what we see is a lot of people moving money from traditional fixed income to . . . what they believe is fixed-income structure,” said Mr Cooper, referring to the predictable royalty payments that songwriting catalogues generate.

Bidders including private equity groups, specialist buyers and music labels have battled for the catalogues of older established artists, whose music has enjoyed a new lease on life thanks to streaming — effectively doubling the value of music rights over the past decade.

Warner Music itself has benefited from an industry-wide revival in music revenues as people shifted listening to paid subscriptions on Spotify and other audio streamers, generating a new source of income for music owners in a digital era. 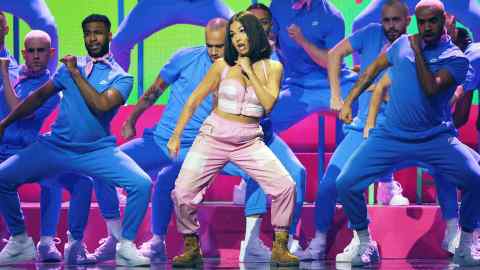 Mr Cooper’s comments came as Warner Music reported its highest quarterly revenue since the company was spun out of Time Warner in 2004.

The record label behind artists including Lizzo and Ed Sheeran reported that total revenue grew to $1.3bn in the three months to the end of December, up 6 per cent from a year ago. The company posted adjusted net income of $114m, down about 10 per cent, which Warner attributed to unfavourable changes in exchange rates on euro-denominated debt.

Digital revenue in the quarter, which includes streaming on Spotify as well as royalty fees from social media companies, grew 17 per cent from a year ago to $825m.

As streaming on Spotify matures, social media has been cast as the next frontier in how music labels can extract money from their songs. Warner Music in December signed a new licensing deal with TikTok, setting royalty payments when songs from Warner artists are played on the Chinese-owned social media app.

The device that can help save a child’s mental health

The GameStop, Reddit, and Wall Street saga already has two movies in the works

The GameStop, Reddit, and Wall Street saga already has two movies in the works

Top Trump adviser had colleague exiled from White House after alleging she was Anonymous, report says