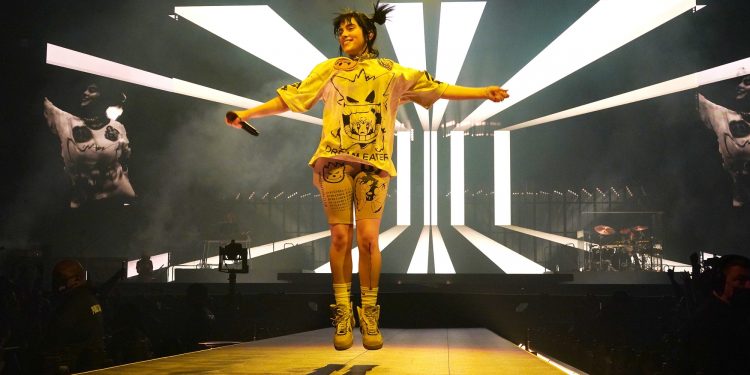 
Billie Eilish kicked off the first night of her ‘Happier Than Ever’ world tour last night (February 3) in New Orleans at the Smoothie King Center – see footage and photos below.

The first show of the US leg of the highly anticipated tour, which will continue across North America tomorrow night (February 5) at State Farm Arena in Atlanta, saw the pop star deliver a jam-packed 90-minute set.

Fans have been sharing clips from the show, which you can take a look at below.

Billie Eilish kicked off her ‘Happier Than Ever Tour’ tonight in New Orleans.pic.twitter.com/0KZ8rK06mC

Happier Than Ever Tour, New Orleans! @billieeilish, thanks for my first concert experience 🙏🙏 pic.twitter.com/IlNcV8nUaa

You can also see a collection of photographs from the show below:

The world tour comes in support of Eilish’s second album, ‘Happier Than Ever’, which landed last July to widespread acclaim. In a five-star review, NME’s El Hunt said it “fully establishes Billie Eilish as one of her generation’s most significant pop artists – and, better still, does so without repeating a single trick from the debut that turned her life upside down”.

Singles from the album included ‘My Future’, ‘Therefore I Am’, ‘Your Power’, ‘Lost Cause’ and ‘NDA’, as well as its title track. The release was followed up last month with a concert film, Happier Than Ever: A Love Letter To Los Angeles.

The pop star will hit the UK and Ireland in June, taking in shows in London, Manchester, Birmingham, Glasgow, Belfast and Dublin. The dates include four shows at London’s O2 Arena. You can see the full list of dates here.

She will also headline this year’s Glastonbury Festival, making her the youngest ever solo act to top the festival’s bill. News of her top billing came back in October shortly after her headlining set at the Austin City Limits festival, during which she condemned Texas’ newly enacted anti-abortion laws.

Last month it was announced that Eilish, Kanye West (officially billed as Ye, his legal name) and Harry Styles are set to headline this year’s Coachella.