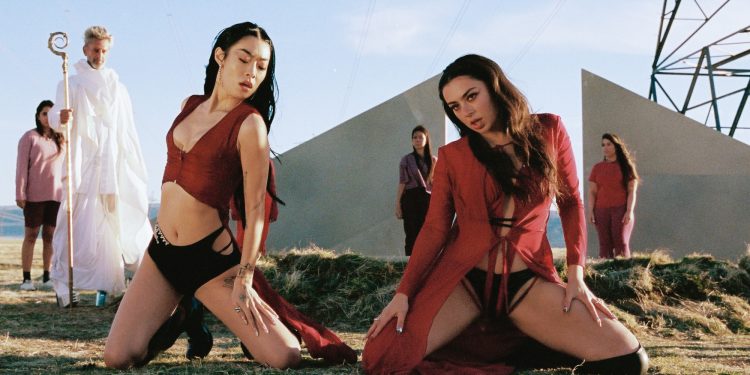 
Charli XCX and Rina Sawayama have shared a video for their new collaboration, ‘Beg For You’ – you can watch it below.

Released last month, the pair’s new track – which samples September’s 2006 dance-floor filler ‘Cry For You’ – is the latest preview from Charli’s upcoming studio album ‘CRASH’, due out March 18.

According to a press release, the accompany video “encapsulates cult theology within popular culture; worship of an image, obsession of a higher power, ritualistic and superstitious practices and the sacrifice for perfection”.

In the Nick Harwood-directed clip, Charli and Sawayama lead a cult through the lonely plains of Lancaster, California, accompanied by two characters depicting Jesus and Satan.

Towards the end of the video, the two pop stars perform a joint ritual on a raised platform as the cult dances around them in a circle. Charli then cuts her hand and squeezes the blood into a pool, which Jesus drinks from using a ladle. The cult then pass out leaving just Charli, Sawayama, Jesus and Satan.

You can watch the video below:

Charli has previously shared two other singles from ‘CRASH’: ‘Good Ones’ (which she later had remixed by Perfume Genius) and ‘New Shapes’ (which featured Christine And The Queens and Caroline Polachek).

The pop star has promised that her new record will sport “an overload of sexiness”, and teased that it will “make people dance and cry at the same time”.

Shortly after the album’s release, Charli will take ‘CRASH’ on the road for a world tour through North America, UK and Europe.

You can pick up remaining tickets here and see a full list of tour dates below.

Charli is also gearing up to release a documentary about the making of her last album, ‘How I’m Feeling Now’, titled Alone Together. The first trailer for the film was released last month, following November’s announcement that it would be coming to cinemas this month.
Tags: BEGCharlicultLeadersRinaSawayamaTurnVideoWatchXCX
Previous Post