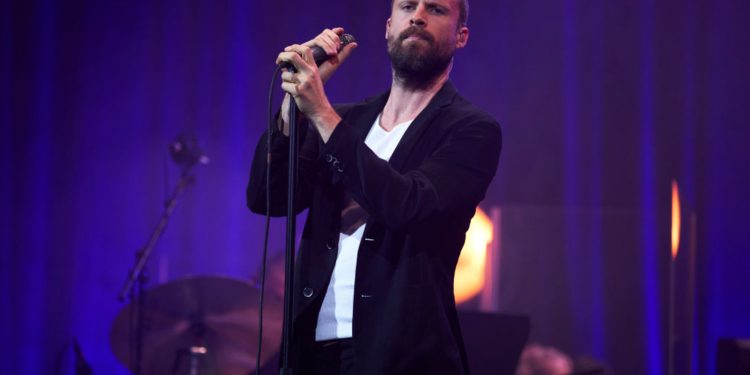 
Father John Misty performed at the Barbican in London this week to mark the release of his new album,  ‘Chloë And The Next 20th Century’.

On Thursday (April 7), Misty (real name Joshua Tillman) took to the stage alongside Barbican Associate Ensemble Britten Sinfonia – and conductor Jules Buckley – to run through a mixed setlist that included a number of tracks taken from his latest LP.

The performance was live-streamed and has been made available to watch through to Sunday (April 10). You can watch it below.

You can check out the setlist here:

‘Funtimes in Babylon’
‘Chloë’
‘Goodbye Mr. Blue’
‘Chateau Lobby #4 (In C for Two Virgins)’
‘Kiss Me (I Loved You)’
‘(Everything But) Her Love’
‘Mr. Tillman’
‘Disappointing Diamonds Are The Rarest Of Them All’
‘Buddy’s Rendezvous’
‘Q4’
‘Total Entertainment Forever’
‘Olvidado (Otro Momento)’
‘Funny Girl’
‘Only A Fool’
‘Pure Comedy’
‘God’s Favorite Customer’
‘We Could Be Strangers’
‘The Next 20th Century’
‘I Love You, Honeybear’

Encore:
‘Nancy From Now On’
‘Things It Would Have Been Helpful To Know Before The Revolution’
‘Holy Shit’

You can read NME’s five star review of the concert here.

Misty recently announced a series of headline UK and European tour dates for 2023.

He will head out on a North American tour this summer; the European shows begin on February 25, 2023 in Oslo, Norway at Sentrum Scene and end March 17 at the at O2 Apollo Manchester. The UK leg includes a headline date at O2 Academy Brixton.

Tickets are on sale now – get them here.

“Much of it is delivered with a wink, and is as dramatically brooding as his past work; every track is vivid yet still quietly dark as it conjures various kinds of lamentation.”