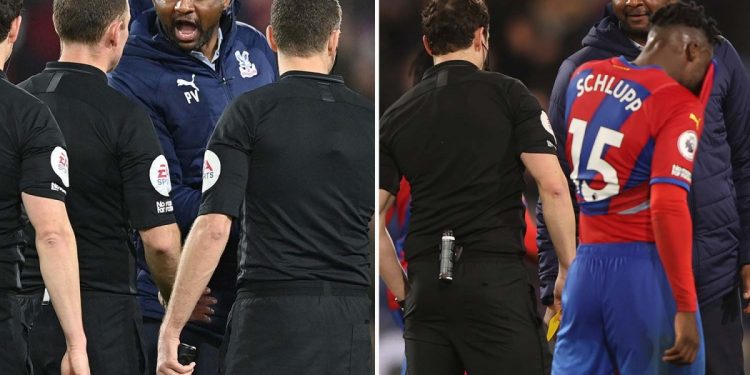 
CRYSTAL PALACE boss Patrick Vieira was BOOKED after his side’s 3-2 defeat to West Ham for ranting at the match officials.

The Eagles boss saw his side slip to defeat at Selhurst Park on Saturday, with West Ham going 3-0 up in the first half before a spirited fightback from the hosts in the second.

But following the final whistle, Vieira was not a happy man.

Taking umbrage with a decision made by referee Darren England, Vieira stormed the field to unleash a barrage of angry words at the official.

However, England refused to be intimidated as David Moyes’ Hammers celebrated their derby win.

And he promptly produced a yellow card for Vieira before making a note of the decision in his booklet.

Despite the warning, Vieira continued his tirade before Palace skipper Joel Ward dragged him away.

Some fans speculated the ex-Arsenal star’s anger was due to a controversial VAR penalty decision, putting West Ham 3-0 up moments before the break.

But speaking after the game, Vieira insisted his emotions had nothing to do with the crucial spot-kick.

And the Frenchman added what he say to England would stay between the pair.

Vieira explained: “I think [the penalty] is the ref’s decision, and from where I was it was difficult to say if it was a penalty at first.

“I had the chance to see it after and I think it was a penalty.

“[The booking] it was something between the ref and myself, there is nothing more to say about it.

“Again, that is between the ref and myself. I got booked for it and I will accept it.”

Africa plays on in 2022 without its great referee