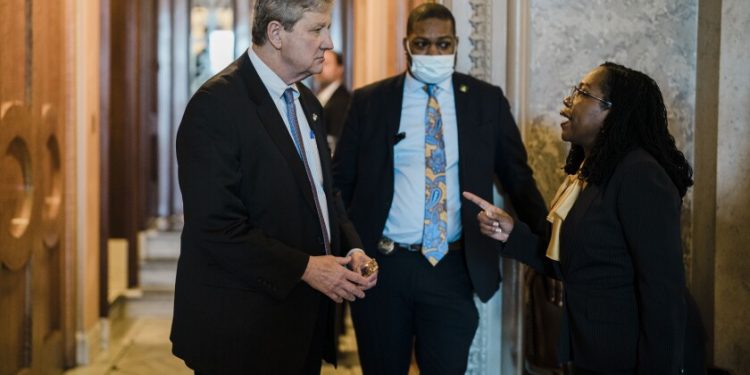 Judge Ketanji Brown Jackson, President Biden’s historic nominee to the Supreme Court, goes before an evenly divided Senate committee this week, where she is likely to be sharply questioned by Republicans about her past work as a public defender.

The first Black woman to nominated to the high court, Jackson has the solid support of Democrats, who can confirm her without GOP support thanks to a tiebreaking vote by Vice President Kamala Harris, president of the Senate.

But this week may prove to be an uncomfortable ordeal for the nominee, since the Judiciary Committee has several Republicans who have presidential ambitions — giving them a prime opportunity to appeal to GOP voters.

“I think both parties would like to lower the temperature of the Supreme Court hearings, but there are several firebrands on the Republican side who are not likely to go along,” said Sarah Binder, a Brookings Institution scholar who tracks judicial nominations.

They include Sen. Josh Hawley (R-Mo.), who said last week he found an “alarming pattern” in which Jackson favored lighter prison terms for those convicted of possessing child pornography. The proper level of punishment for such defendants has been much debated, and the issue came before the U.S. Sentencing Commission, where Jackson served for several years.

A White House spokesman described Hawley’s charge as an example of “toxic … misinformation.”

Since Jackson graduated from Harvard Law School in 1996, she has worked steadily as a lawyer. She clerked for three judges, including at the Supreme Court, worked briefly at four law firms, served eight years as a U.S. district judge and one year as a judge on the U.S. Court of Appeals for the D.C. Circuit.

But the most cited aspect of her legal career is the two years she spent in the federal public defender’s office in Washington beginning in 2005. These attorneys represent persons charged with federal offenses, recently including many of those charged with assault at the Capitol during the Jan. 6 insurrection last year.

Progressives say her time there means she would bring a different perspective to the high court. Since Justice Thurgood Marshall retired in 1991, the court has not had a justice who had represented criminal defendants.

But Republicans pointed to the same service as evidence she may be unduly sympathetic to criminals.

“Liberals are saying that Judge Jackson’s service as a criminal defense lawyer and then on the U.S. Sentencing Commission give her special empathy for convicted criminals,” Senate Minority Leader Mitch McConnell (R-Ky.) said last week. “I guess that means that government prosecutors and innocent crime victims start each trial at a disadvantage.”

Last year, during her hearing for the appeals court, Sens. Tom Cotton (R-Ark.) and Ted Cruz (R-Texas) questioned her about representing several detainees who were being held at the U.S. military prison at Guantanamo Bay, Cuba.

Sen. Ben Sasse (R-Neb.) asked if she was concerned about putting “more violent criminals back on the streets.”

They are likely to raise these issues again this week.

A.J. Kramer, who has headed the public defender’s office in Washington for 30 years, said he assigned cases to the attorneys. He said he gave Jackson several of the Guantanamo cases because of her stellar legal background.

The Bush administration had insisted the prisoners held at Guantanamo had no rights, but the Supreme Court disagreed and said they may file appeals to federal judges. But even so, the law was unclear and in flux.

On Monday, the 22 senators on the Judiciary Committee will take turns delivering opening statements and then introduce Jackson to deliver her remarks.

The committee will then adjourn and begin questioning her Tuesday morning and continue through Wednesday. Thursday will be devoted to testimony from outside witnesses.

In recent years, Senate hearings for Supreme Court nominees have become fiercely partisan. All the committee’s Democrats opposed President Trump’s three nominees, and at times, walked out of the room in protest.

Justice Amy Coney Barrett, confirmed in October 2020, was the first successful nominee in 150 years to win approval without a single vote from the opposition party.

The committee has not said when it will vote on Jackson’s nomination.

If it divides entirely along partisan lines, Senate Majority Leader Charles E. Schumer (D-N.Y.) can introduce a motion to have her nomination sent to the Senate floor.