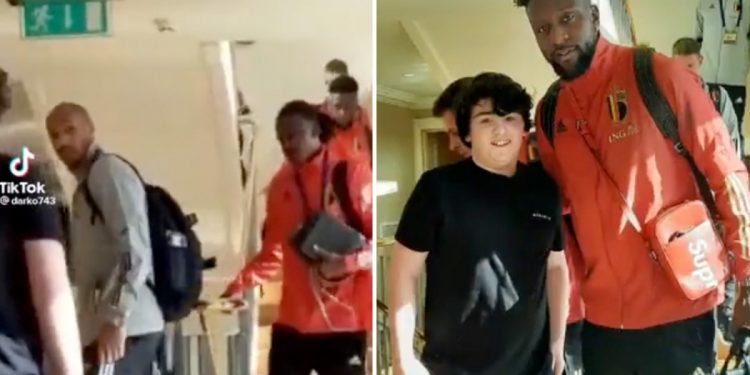 The Belgium coach, 44, was leaving the team hotel ahead of Tuesday night’s friendly against Burkina Faso along with the rest of the squad.

Liverpool forward Origi, 26, was coming down the stairs just behind Henry.

And as the young supporter gestured for a photo, Henry seemed to get his wires crossed.

The French legend turned to face the kid, before realising his error and sheepishly walking off.

Instead, the fan beamed as he posed for a photo with Origi.

And the whole awkward situation has left fans in stitches after the TikTok clip went viral.

One tweeted: “Only one has scored in a Champions League final…”

Another joked: “This man really blanked Henry for Origi.. my life is made.”

A third added: “Thierry you’re not that guy pal.”

While Henry is a world footballing legend for his time with Arsenal and Barcelona, Origi has been forced to settle for the mantle of cult icon at Liverpool.

The Belgian is anything but a regular for the Reds, thanks to Jurgen Klopp’s stacked attacking ranks, with the forward set to leave Anfield on a free this summer.

But he has popped up with some vital goals for the club, including a last-gasp Merseyside derby winner and two goals in the famous 4-0 comeback win over Barcelona en route to winning the 2019 Champions League.

Origi also scored the second of the 2-0 win in the final against Tottenham.

The forward is now expected to join AC Milan on a free at the end of his contract.

But for Henry, it topped off a frustrating week after he was heckled by bitter Republic of Ireland fans during Saturday’s 2-2 draw.

The ex-Arsenal star’s infamous handball assist stopped Ireland going to the 2010 World Cup, with fans refusing to forgive him over a decade on.

Married At First Sight: Olivia Frazer loses her JOB after stint on the show

Married At First Sight: Olivia Frazer loses her JOB after stint on the show