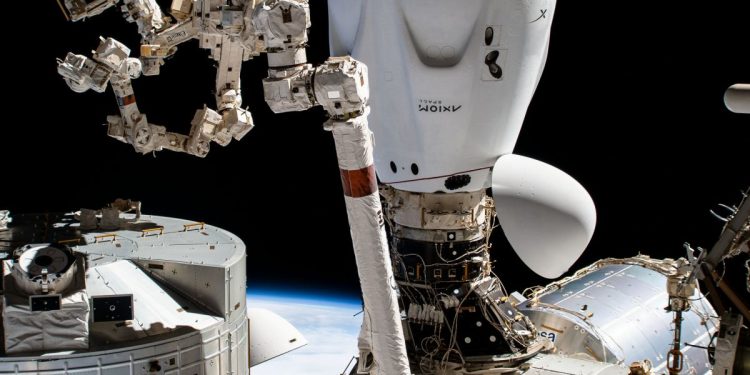 The first-ever all-private astronaut mission to the International Space Station (ISS) is about to head for home, and you can watch the departure live.

A SpaceX Dragon capsule carrying the four crewmembers of the Ax-1 mission is scheduled to leave the orbiting lab today (April 23) after a two-week stay. The hatches between the Dragon and the ISS will close at about 4:30 p.m. EDT (2030 GMT), and the SpaceX craft will undock just over two hours later.

You can watch these milestones live here at Space.com, courtesy of NASA, or directly via the space agency. Coverage of hatch closure will start at 4:15 p.m. EDT (2015 GMT), and the undocking webcast will commence at 6:15 p.m. EDT (2215 GMT).

If all goes according to plan, the Dragon capsule, named Endeavour, will splash down off the Florida coast on Sunday (April 24) at 1:46 p.m. EDT (1746 GMT). You can follow that action live here, too, courtesy of Axiom Space, the company that organized the Ax-1 mission. Axiom’s splashdown webcast will start at 12:45 p.m. EDT (1645 GMT) on Sunday.

Ax-1 launched atop a SpaceX Falcon 9 rocket on April 8 and arrived at the ISS a day later. The mission was supposed to leave the orbiting lab on Tuesday (April 19), but bad weather in the splashdown zone pushed the departure back a few days.

That delay impacted SpaceX’s next astronaut mission, the Crew-4 flight for NASA. Crew-4 had been scheduled to lift off on Saturday, but it will now launch no earlier than Tuesday (April 26). NASA officials have said they want a two-day window between Ax-1’s splashdown and Crew-4’s launch, to allow time for data analysis and other preparations.